When elected members of parliament are locked outside their chamber, you know you are witnessing a defining moment in Sāmoa’s journey as a nation, writes Mata’afa Keni Lesa from Apia.

Forty-five days after the people of Sāmoa spoke at the ballot box on whom should lead the nation for the next five years, it was meant to herald in a new era in the history of Sāmoa and its proud people. Yesterday should have been a glorious moment for all members of parliament who received the nod from their constituents to take their seats in the Maota Fono. Their families, villages, churches and supporters deserved this day. They earned it; no one has the right to deny them this moment.

For the Fast party, led by Fiame Naomi Mata’afa, this was meant to be their time to shine. It was their moment to rewrite history by taking control from the HRPP, who have held power for nearly 40 years. In Fast and Fiame, the Sāmoa parliament was supposed to formally welcome its first woman prime minister: a gigantic step forward in the push for gender equality and the empowerment of women in the region.

What happened instead will be etched in memory and remembered as a day of shame for Sāmoa, the once proud beacon of democracy and political stability in the Pacific region. The scenes and sounds were incredible, albeit emanating from a sad moment, something no one could could have imagined. The doors of the parliament building were bolted shut, forcing a makeshift tent to become the extraordinary setting for an extraordinary moment: the swearing in of Fiame Naomi Mata’afa.

The simple answer is this: there are moments and then there is what we saw yesterday. When elected members of parliament are locked outside their chamber, and when the chief justice and members of the judiciary arrive to a locked parliament building, we are unquestionably witnessing a defining moment in Sāmoa’s journey as a nation. 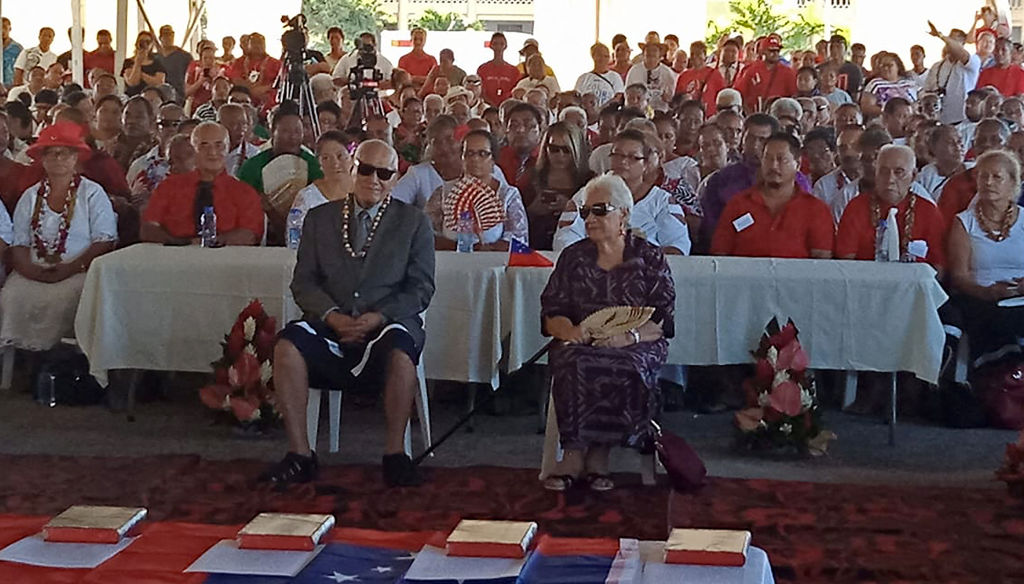 Former Sāmoan head of state Tui Atua and his wife Masiofo Filifilia Tamasese attend the swearing in of Fiame Naomi Mata’afa in Apia at a makeshift tent ceremony. Photo by Malietau Malietoa / AFP via Getty Images

A day of celebration became a day of mourning. It wasn’t no there were so few dry eyes in the crowd, especially when the chief justice, who was decked out in his full judiciary garb, and accompanied by the entire bench and the police commissioner, were rebuffed by a locked parliament door. The look on his face said it all. The moment was a vicious blow to Sāmoa’s democracy and rule of law in a continuing election saga, and one which still has no clear end in sight.

While we have witnessed some shocking behaviour over the past five weeks, Monday May 24, 2021, will be remembered as one of the most heartbreaking days in the decline of democracy in this country.

But then again, as Sāmoans, what did we expect after all these years of giving one party and one man in particular so much political clout and so much power and control? Maybe we are to blame? Did we not see this coming especially with the desecration of the separation of powers between the key pillars of democracy that are sacrosanct and sacred?

In that constitution, our hopes and dreams as a nation are clearly spelled out. But this document has been butchered so mercilessly by the ruling administration in recent times that our ancestors would barely recognise it.

According to this very constitution, this was the last day the results from the election of April 9 could be used to shape the 17th parliament of Sāmoa. So this was the day both the constitution and the judiciary called on the executive and the caretaker government to let the people’s choice of government be sworn in. On Monday morning, it did not happen. The clerk of the legislative assembly withheld the keys to the building and when he eventually fronted the crowd, he cited the head of state’s proclamation (which has been declared unlawful and illegal by the Supreme Court) and blamed instructions from a caretaker speaker of parliament, who had already resigned when the 16th sitting of parliament dissolved.

This was a new low.  Was it surprising therefore that they locked the doors of the parliament building to the judiciary and the people of Sāmoa who turned up at the Malae o Tiafau early yesterday? Absolutely not. After years of suffering at the hands of a very powerful government, led by a man who has made no secret in claiming he is God’s gift to Sāmoa, this represented the final insult to the rule of law in this nation. Amid the singing, chanting and the flags were wailing and tears. It was hard to ignore.

None sadder than perhaps the former Head of State, Tui Atua Tupua Tamasese, who in his Mau Movement lavalava, could only look on from under a stuffy tent where he was surrounded by police officers and members of the public. To be locked out of the parliament building after years of service and sacrifice for his nation, what would have been going through his mind? Could he have been thinking about the famous words of his ancestor and the late Tupua Tamasese Lealofi III on that Black Saturday while he was dying: “My blood has been spilt for Sāmoa. I am proud to give it. Do not dream of avenging it, as it was spilt in peace. If I die, peace must be maintained at any price.” The HRPP were only a few hundred metres down the road at their headquarters at Petesa, where caretaker prime minister Tuilaepa spoke to the party faithful,. He made it absolutely clear that to his mind all public servants and all public assets, including the parliament complex, belonged to the HRPP government. Despite Fast having 26 members while they have 25, the caretaker prime minister insists the HRPP is still Sāmoa’s government. That says a lot.

Back outside the parliament complex, despite the embarrassment of being locked out and being treated like little kids, Fiame said something all Sāmoans would do well to take to heart, as we absorb the events of the day. “O lalo lava e maua ai malo,” she said. Translated to English: “It’s through humility that victory is found” or “it is humility that builds nations.”

These are tough unprecedented times for Sāmoa. But how is it that despite such calamity, shame and sadness that we are still talking about hope? We have got to hang on to hope; even when we just always see just how. Aside from our faith as a Christian nation, we know pain and sorrow don’t last forever, joy comes in the morning. This too shall pass.

Mata’afa Keni Lesa is an award-winning Sāmoan journalist and the former editor of the Sāmoa Observer News Group.