Telling a Rotary Club audience that housing is a serious problem and they should care deeply about it landed flat but took some daring from the National leader, writes Justin Giovannetti.

Judith Collins’ level of control over the National Party is still a question best answered by a shrug.

Elevated to her party’s leadership in a moment of internal crisis, when the party found itself rudderless before an election, Collins needs to put her stamp on National. Yesterday’s state of the nation speech to a greying audience of Rotarians at Auckland’s Ellerslie racecourse should have been an opportunity for her to win over the party’s base. Instead, it largely fell flat.

The mood was set before I arrived at the venue with The Spinoff’s Alex Braae. Our Uber driver, a self-described National supporter who knew our destination only by the address, quipped: “You’re going to see the loser.”

Christopher Luxon, the newly elected MP for Botany and a former chief executive of Air New Zealand, was in the audience. He sat quietly as Collins took the stage to present her plan for the opposition party.

Push the government to make the border tight against Covid-19, while letting more opportunity through, she said. “If we make poor choices now our kids will pay for Covid-19 multiple times over,” Collins told the crowd.

The Rotary Club was having none of it. They sat, respectfully, with arms crossed. Having whipped up crowds of partisans during last year’s election, Collins’ first attempt at politics in 2021 was a harsh landing.

What would have been an applause line during a National campaign event, poking fun at the incompetence of Labour minister Phil Twyford, was greeted by silence. One man took out his phone and started scrolling.

Spend less on the recovery, but speed it up, she continued. Labour has spent billions of dollars in response to Covid-19, but National would do it better, according to Collins. “The tech sector brings high paying jobs,” she added, noting that the sector needs more help. Another applause line that went unnoticed, eyes in the audience wandering to the bar. A small fridge full of cold bottles of Stella Artois was waiting.

Help those in hardship, but don’t raise the minimum wage or sick leave. A better economy is the only way to create jobs, not legislation or plans out of the Beehive, she said.

“It’s middle New Zealand that the government has left behind, to fend for themselves,” Collins continued. There was no applause. People squirmed in their seats. One man kept looking at a noisy air conditioner. 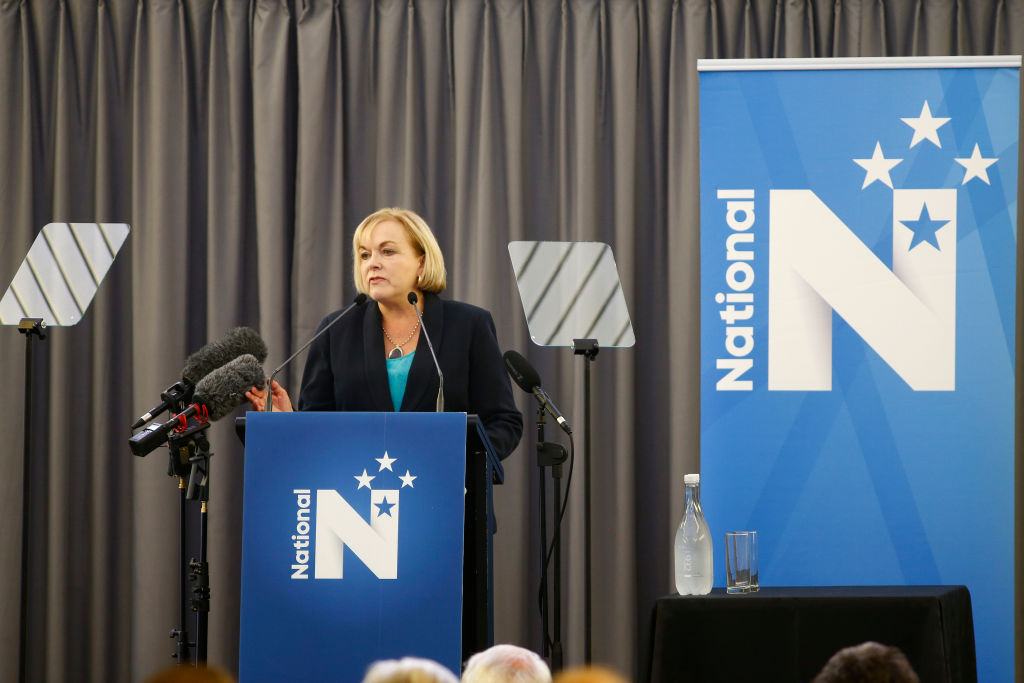 National leader Judith Collins delivers her State of the Nation speech to the Rotary Auckland Club luncheon at the Ellerslie Events Centre on January 26, 2021 in Auckland. (Photo: Phil Walter/Getty Images)

The centrepiece of Collins’ address was an unnatural fit for a Rotary Club crowd: more affordable housing. Whether out of political bravery or wanting to top the nightly newscast, she announced that National will support emergency legislation to tackle the “housing emergency” and immediately liberate land for construction.

A letter, calling for the changes, had been sent that morning to the prime minister about it.

It would be fair to ask if any of this really matters. Being the leader of the main opposition party facing a majority government can be a thankless task. Put simply, Labour doesn’t need them. It has full control over a parliament that can pass legislation in a few hours if Labour needs it to do so. But there has now been a clear declaration from the leader of the National Party that a housing emergency exists.

National wants the government to rezone council land, create 30 years’ worth of housing supply and suspend any appeals process that could slow building. “If councils don’t do it, we’ll do it for them,” said Collins of freeing land for construction.

Their model is Christchurch after the earthquake: relax planning laws, open up land and bring in skilled workers. Taxes, regulations on landlords or any restrictions are a bad idea, according to the National leader.

Collins made the RMA a frequent target during the campaign. The RMA is also one of the few things Labour and National agree on. Both parties want to completely rewrite the legislation, although Collins said yesterday she doesn’t think Labour will get the job done before 2023. For each peace offering to Labour, there’s a criticism of its failures.

Asked yesterday whether she’s open to cooperating with National, prime minister Jacinda Ardern said she’ll keep an open mind. “The thing that she’s saying we should do we’ve already done, but I take the offer in good faith,” said Ardern.

The prime minister said she’s already directed councils to disclose what land can be made ready for construction by July. Measures to help home buyers, and cool the overheated housing market, are expected in the budget in a few months.

“There are elements of the letter I have to say I disagree with. The claim that public housing doesn’t make a difference. The leader of the opposition doesn’t think we need to do anything on the demand side, I disagree. However, this is a persistent issue in New Zealand,” continued Ardern.

During the drive to the Ellerslie racecourse, the Uber driver argued that Collins’ housing plan needs to deal with the dearth of workers in the country. The building councils have already said they can’t build much more than is currently in the pipeline. Anyone who has tried a renovation recently knows that it’s hard to get a tradesperson. Even when you can get one, they struggle to find building materials.

The government also needs councils that want to spend money on infrastructure to support new builds, something most are reluctant to do.

Collins says yes, these are all problems. Even if her plan doesn’t reduce housing prices, and she won’t commit to lowering them, it’ll make land available and that’s a good thing.

How could they get trades people through the border, during Covid-19? “There’s an opportunity out of this crisis,” was all she would say.

There was value in the housing ideas Collins proposed. Emergency legislation on housing could focus attention on housing at a time when rents and prices are spiraling out of control. Collins made it clear to her audience that this is a serious problem worthy of their attention. Yet whether it was the Covid-19 case in Northland, the summer sun outside, or the topic of housing, they just weren’t all that interested.

On the way to Ellerslie I bet Alex Braae that Collins would get at least one standing ovation. At the end of the speech I handed him a $5 note.