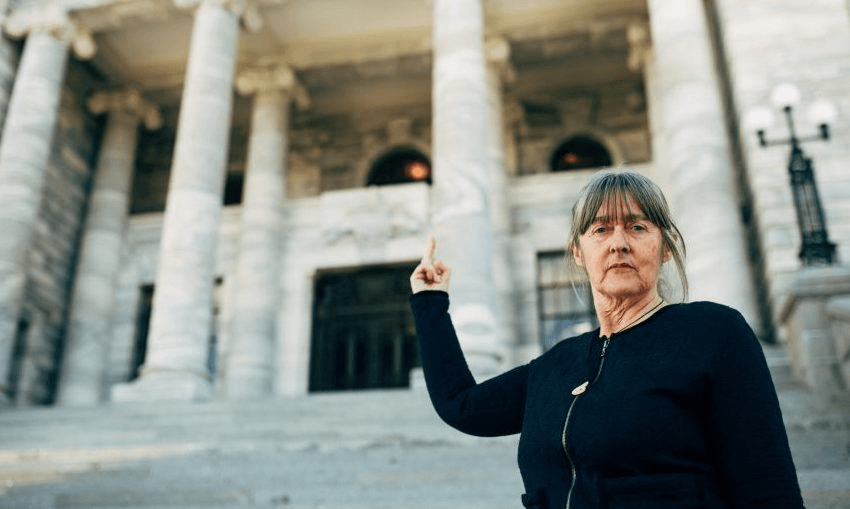 By Catherine Delahunty
Guest writer
Made possible by

Ahead of her debut at the Auckland Fringe on Thursday night, former Green MP Catherine Delahunty writes on the good, the bad and the toxic of nine years in parliament – and what needs fixing.

Warning – the show I am describing contains swearing and explicit feminist content.

I did nearly nine years of Question Time in parliament and it gave me the blues. It felt like I was watching precious moments of my life run through my fingers as I endured the petty and adversarial routines while trying not to become an angry heckler or nasty interjector. It can be argued that parliament is ritualised ideological warfare and the personal attacks are part of the strategic battle, but I remain interested in a better way to operate. Hence my show Question Time Blues which has just completed two sold out seasons at BATS theatre in Wellington and opens tonight as part of the Auckland Fringe.

Question Time Blues was born out of the poetry I started writing at odd moments on planes and in the House, to try and crystalise my personal and political response to the ridiculous and sometimes awful experiences in parliament. It is my detox from the institution rather than a personal attack on any particular party or MP but is clearly influenced by the ugliness of the Key era. If we do not laugh we might well cry.

I am also always keen to laugh with people and celebrate the great moments and opportunities which MPs experience, despite the toxic institutional culture and the effects of unquestioned privilege in the parliament.

Experiences such as supporting the Marriage Equality Bill, and opportunities to champion unpopular causes such as West Papua and children with high support needs, made me grateful to be an insider. My trip to Gloriavale and other bizarre incidents inspired reflection, and my incompetent and hostile relationship with social media also gets an airing. I have often imagined the parliament as a Survivor celebrity show, our semi naked ambition and short term competition is a form of entertainment if there no other game shows to watch.

At a deeper level Question Time Blues was inspired by a revulsion against the machine and the sexism and racism that permeates the Westminster system. I had an ever growing desire to question the model of parliamentary politics. It is a tired imitation of English colonial traditions which were violently imposed here rather than a representation of a Pacific nation built on a founding Te Tiriti which upholds dual sovereignty. The “Matike Mai” report on tangata whenua views of constitutional transformation has caused me to think about how the system can be changed and what the barriers are to a new conversation within my culture which is still permeated with the arrogance of a dominant group.

For me performing the show has been a chance to question many aspects of the parliament as an insider. My spoken word pieces accompanied by live music and images are written to provoke, hence such titles as “Double the Quota of White Men”, “I am not a Racist”, “Haters and Wreckers” and “The Lying, the Bitch and the Wardrobe”. I have reflections of the role of the Mace which is a gold weapon marched into parliament every day to remind us who is boss. The portraits of white men with luxuriant facial hair set the tone in parliament and reminded the rest of us who are the true inheritors of their power. The speaker as the ultimate patriarch. And some moments of shame on selects committees had to be exposed. The media are included as fellow travellers in the project of manufacturing public consent to the trivialised status quo.

As a workplace parliament can expose you to a great deal of stress, ridicule and sabotage as a human being. I have experienced personal comments from men that are far worse than any jokes I heard in ten years of working in a shearing gang. I have listened to pathetic jokes, time wasting and power grabs. I have seen the public pour out their hearts at select committees while some MPs are playing on Facebook and I have also met people who rise above the culture and show respect and dignity towards all others.

Question Time Blues has also been a chance to share some of the traumatic moments of the last few years, from the walkout of parliament by sexual abuse survivors to the final days of Metiria Turei’s evisceration as a former beneficiary who told her own story and paid the price. Loneliness and a creeping disillusionment towards my own party’s trajectory kept me awake in soulless hotel rooms reeking of privilege and chemical cleaning sprays.

My hope is that people who have seen the show will start thinking about the different ways we can transform the political system. It’s so much more than altering the prayer and being more family friendly. We can reimagine the world and become a Te Tiriti based participatory Pasifika nation that welcomes diversity and challenges neoliberal capitalism. We can commit to the natural world as our model not the unnatural posturing of Westminster sword fights. But first we must admit that the system is not working for the many but benefits the few. Question all of it, the blues was never about compliance.