John Tamihere said AT had gone rogue. And he was right, argues Hayden Donnell.

In the final days of his doomed Auckland mayoral campaign, John Tamihere kept hammering the same message. At Grey Power gatherings and ratepayer association meetings alike, he would accuse Auckland Transport (AT) of having gone rogue. He said the organisation was unaccountable to both the council and the people of Auckland. He claimed it was “out-of-control”, and running “sham consultation processes”. He promised repeatedly to fire its board members.

Tamihere lost the election in a landslide. His campaign was written off in many quarters as a clearing house for bad ideas. His promise to freeze rates was unworkable. His plan to turn the harbour bridge into a two-level superstructure was an engineering improbability. His decision to say “sieg heil” during a debate was too Nazi. But Tamihere was right about AT.

At the beginning of May, a feedback form went up without fanfare on Auckland Council’s website. It was highly technical and labyrinthine, almost impossible to decipher for a normally functioning human brain, but after several hours of translation, transport enthusiasts judged that some unnamed middle managers were trying to ruin Queen St. The council had just gone to the High Court to successfully defend a pedestrian-friendly redesign for the street over the Paleolithic Era objections of some local business owners. Now this last-minute consultation document was asking whether it should sacrifice much of that upgrade’s planned pedestrian space to make room for indented bus bays that prioritise cars.

Councillors reacted with dismay. They’d voted unanimously to pedestrianise Queen St in 2018, and the new consultation was undermining the first, tentative step toward actually achieving that goal. North Shore councillor Richard Hills called it “bizarre” and said it had “blindsided” him.

This was far from the first time councillors had watched their own officials torpedoing their policies. The worst culprit is AT, a “council-controlled organisation” designed to operate as an “arm’s-length entity”, which seems to prize that autonomy above all else.  In July 2020, the council approved Te Tāruke-ā-Tāwhiri, a climate plan which calls for Auckland to reduce its transport emissions 64% by 2030. Since then, AT has at best ignored many of that document’s goals, and at worst committed acts of sabotage.

Its most conspicuous bit of climate vandalism is the Regional Land Transport Plan, a 10-year schedule of projects made in conjunction with Waka Kotahi and KiwiRail. The document’s title page shows a young child on a bike. A more honest cover would depict that child about to be mowed down by a distracted driver in a Ford Ranger. The draft plan actually raises emissions by 6% by 2031. Lawyers for Climate Action president Jenny Cooper QC says that’s unlawful, as it doesn’t comply with Te Tāruke-ā-Tāwhiri, several other policies, and general human decency. Her organisation is threatening to take legal action against the council if it approves the plan.

Much of the blame for that goes to Waka Kotahi, thanks to its cheeky dabbles in car-centric disaster projects like the Mill Road highway. But some has to go to AT as well. Its feedback form literally gave people no option but to ask for more cars. That deference to car culture is most evident in its approach to cycling infrastructure. Te Tāruke-ā-Tāwhiri calls for the share of trips being made by bike in Auckland to increase from 0.9% to 7% by 2030, and 9% by 2050. If AT is aware of those goals, it seems to hate them. The RLTP only calls for 2.5% cycling mode share by 2030. Even that’s looking ambitious. The organisation promised 10km of new cycleways last year and built 6km. This year, it promised about 5km. Things aren’t looking good.

The organisation is planning 7km of cycleways next year. At this rate we should reach our climate targets by the year 2150, provided most of the population has died of climate change by then. AT’s refusal to follow policy is visible in its projects across the city. A transport upgrade in Orewa actually adds angled car parks, while relegating cyclists to a wavy shared path in a field. An artist’s impression of an upcoming upgrade in Swanson includes a trapped cyclist staring into the abyss.

In St Heliers, on the most popular bike route in the city, AT has shunned protected cycleways in order to conduct a deranged science experiment on how many cyclists can be injured by car doors on one stretch of road. A “safety upgrade” to the Royal Oak roundabout ensures it’s still a death trap for anyone not driving a truck. The same formula has been applied in Blockhouse Bay. The list goes on. Te Tāruke-ā-Tāwhiri calls for a revolution. AT can barely manage change.

Kate Hawkesby may be hallucinating cycleways everywhere she goes, but they remain stubbornly immaterial. Instead of a safe cycling network, we get PR and gimmicks. In June, AT is hosting an all-day hackathon on whether “new all-weather cycling fashion” or a “compelling rewards scheme” could get people biking at Auckland University. It’s hard to say what the sessions will come up with, but online feedback indicates the primary improvement most cyclists want is to not die during their ride. That hack doesn’t appear on the list of ideas.

There are some exceptions. Karangahape Road is getting safe cycling infrastructure, and it looks like a section of Great North Rd may too. Some of the council’s City Centre Masterplan is being belatedly implemented. But even in projects where the organisation makes progress, it tip-toes its way to change. On May 20, AT announced it was consulting on the Project Wave cycle path linking its Quay Street and Nelson Street cycleways. The project has been in every council planning document for years. AT is asking people whether it should do its job, when it should just do it.

The price for this heady mix of inaction and excruciatingly slow progress isn’t just increased carbon emissions. It’s paid for in the lives of people like Warrick Jones, run over in a section of Lake Road where people have been crying out for safe cycle infrastructure and road calming measures for years, or Michael Sheffield, killed by a truck on a five-lane, cycle infrastructure-free motorway that links the Quay Street and Tamaki Drive cycle paths. Cyclists are roughly 14 times more likely to die than motorists. In 2020, 57% of the people killed on our roads weren’t in a car.

Some councillors say that when they complain to AT, it blames its inertia on not having a “community mandate”. With respect, what the fuck? The whole point of AT is that it’s a step removed from the pressure groups that have warped Auckland’s transport decisions in favour of the change-averse moneyed few for too long. Its job is to implement overarching council plans, and let elected officials deal with the local fallout. Instead it spends time extrapolating its designs from the incoherent things old people yell at its staff in town halls. It continues to let a loud, ill-informed minority overrule both its actual transport experts, and the councillors that are meant to be its bosses. 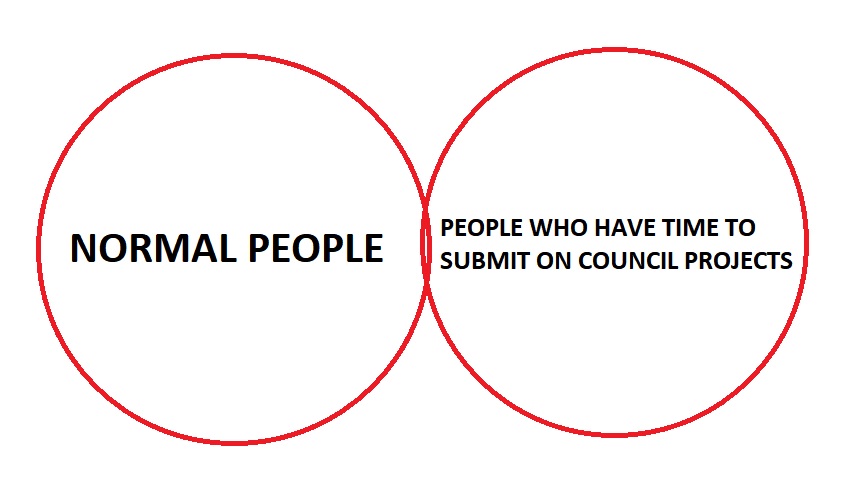 Those councillors aren’t blameless. They could take action to rein in AT, instead of complaining about its decisions on social media. They have the power to demand action from its board, and to fire members if that doesn’t take place.

They should do something. Because John Tamihere was also wrong about AT. He thought the organisation had a radical “anti-car agenda”. The opposite is true. Against the wishes of just about every council policy document, its unelected officials are committing us, project by project, to more years of auto-dependency. That’s obviously bad for cyclists and pedestrians. But it’s also bad for motorists. We’ve tried motorway extensions and road widening projects for decades. Building roads just induces more driving, putting extra cars on the road, which leads to more congestion, which leads back to building more roads. We shouldn’t let our transport officials trap us in that stupid, Sisyphean cycle any longer just because they’re scared of getting yelled at by a ratepayers association. It’s time for AT to give change a chance. If it won’t, Tamihere had another suggestion for what to do: just get rid of the organisation.