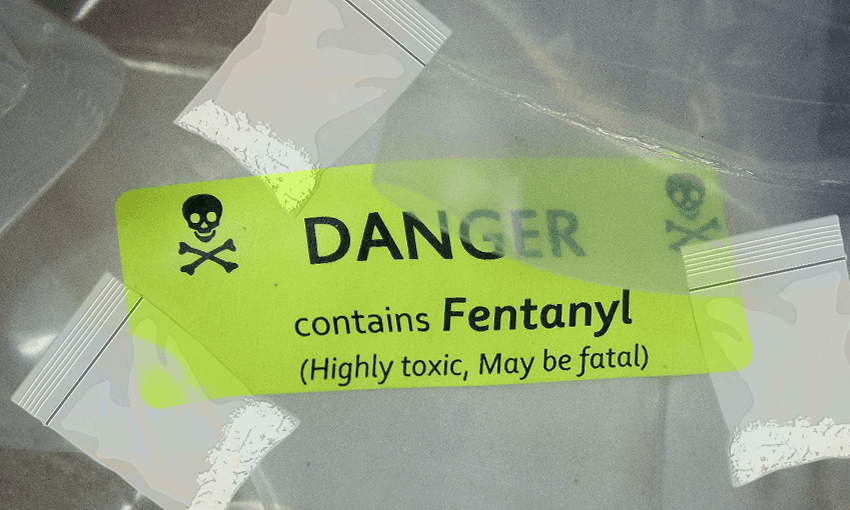 A rash of fentanyl overdoses in the Wairarapa over the weekend show the danger inherent in our do-nothing approach to drug law reform, writes Duncan Greive.

This past Saturday a “mystery drug” that had hospitalised multiple people in the Wairarapa was revealed to be fentanyl – the first known instance of the powdered form of a drug that has rapidly risen in prevalence in the United States being found in Aotearoa. Two of those exposed were found unconscious, and were fortunate to be administered Naloxone, which swiftly turns around opioid overdoses.

This is a deeply concerning development in our drug supply, which until now had somehow evaded fentanyl – a synthetic opioid that has driven an epidemic of deaths in the US. A record 107,000 died of overdoses in the US in 2021, over 60,000 of them from fentanyl. More than a million Americans have died of overdoses since 2000, many initially addicted to legal painkillers like Oxycontin, before being forced to seek illegal drugs through addiction. When fentanyl became widely available, deaths started spiking and show no sign of slowing down.

The Wairarapa victims are said to have taken the drug unintentionally, having bought it under the assumption it was cocaine. This is a widespread occurrence in many other more developed drug cultures. Fentanyl feels like the substance that signals the logical end point of the always futile war on drugs. It’s incredibly potent, and a tiny amount of it – equivalent in scale to a few grains of salt – can be the difference between a high and a lethal overdose.

Why haven’t we seen fentanyl before?

That New Zealand has evaded its reach is essentially an accident. In many ways it’s the perfect drug for a small and distant market – an unobtrusive package could service a whole town. Or kill dozens of people in a weekend. That it hasn’t shown up here is very much a function of our scale and sea borders, but as with everything from Netflix to Costco, the big international suppliers will get around to servicing second-tier markets eventually.

This could be happening right now. Not because any drug user here wants it to – remember, the Wairarapa overdosers thought they were taking something else – but because drug users have no option but to take that risk every time they ingest a substance. They buy from clandestine networks, have very limited ways of checking what is in the products and no recourse if what they are sold is not what they were told it would be. This is down to the criminal penalties associated with drug possession, all built on our harsh 70s legislation, largely unchanged since it was passed at the height of prime minister Muldoon’s draconian influence, and persisting under the kindness doctrine of the current Labour government.

This is the legislated environment that creates the necessary preconditions for the kind of epidemic of overdose deaths seen in the US.

Were New Zealand to have the same number of deaths per head of population as seen in the US last year, we would be burying 1,677 of us. To put that into perspective, it’s more than the total number of deaths from Covid-19 since the start of the pandemic. And because drug overdoses disproportionately impact younger people, it would represent a very different demography of corpses piling up in our morgues.

Is there another route?

In a grim irony, on the same day our first mass fentanyl poisoning was confirmed, the NZ Drug Foundation released a survey of attitudes toward drug law reform in New Zealand. It showed that 61% of us favour treating drug use as a health issue, rather than a criminal one, and 68% support the repeal of the Misuse of Drugs Act to be replaced with something more humane and fit for the 21st century.

The Green Party sent out a statement on the same day, calling for the abandonment of the act. “That this anti-evidence law remains the backbone of the government’s approach to substances is a political calculation,” said spokesperson Chlöe Swarbrick. “We’ve long known that this criminal prohibition not only pushes these problems into the shadows but are also applied unfairly and discriminatorily.”

Contrast the legal status of drugs like cocaine, MDMA, meth, LSD and cannabis with alcohol. The former are illegal, subject to prohibition, with both possession and supply criminalised. Buyers roll the dice on both prosecution and on what they take every time they make a purchase. Alcohol, by contrast, is available everywhere and all the time. Its different varieties are fetishised, its brand names adorn our sports heroes. Yet it kills between 600 and 800 people a year, and is implicated in the deaths of one in five men and one in 10 women in New Zealand. Incidentally, this is orders of magnitude more than the 40 or so drug overdose deaths we have in a typical year.

This is not an argument in favour of prohibition. As we see with our current regime, banning something doesn’t mean people stop taking it. Decriminalisation simply means that possession would not carry with it the risk of imprisonment, and that testing could occur more openly – allowing the beginnings of a measure of control over what is actually being sold in this country.

The alternative is to simply ride on with our current system, and hope for the best. Hope that what is happening in the US doesn’t happen here. For evidence as to why “hope for the best” isn’t a great strategy as far as things happening overseas goes, look at news footage from parliament in February of this year. Realistically, fentanyl was always a when, not an if. And when appears to be now.

That the victims survived is largely down to luck. As the Drug Foundation noted last year, we are “grossly underprepared” for the widespread availability of fentanyl. Naloxone is distributed in a fairly patchwork and arbitrary way. That we have made progress by legalising drug testing is welcome, but insufficient. The mess that was the half-hearted campaign to legalise cannabis in 2020 shows just how little political capital has been expended by our major parties.

What we saw in Wairarapa over the weekend shows this cannot hold – and the survey results suggest this country, which prides itself on being in motion, is ready to move again. This era is one in which it’s entirely natural to want to take something to feel some type of way. That should not mean a sentence to prison, let alone death. So unless we want to end up with the breaking wave upon wave of entirely avoidable tragedy seen in the US, it’s time for this country to leave its drug laws in the 70s and build something fit for the 2020s.