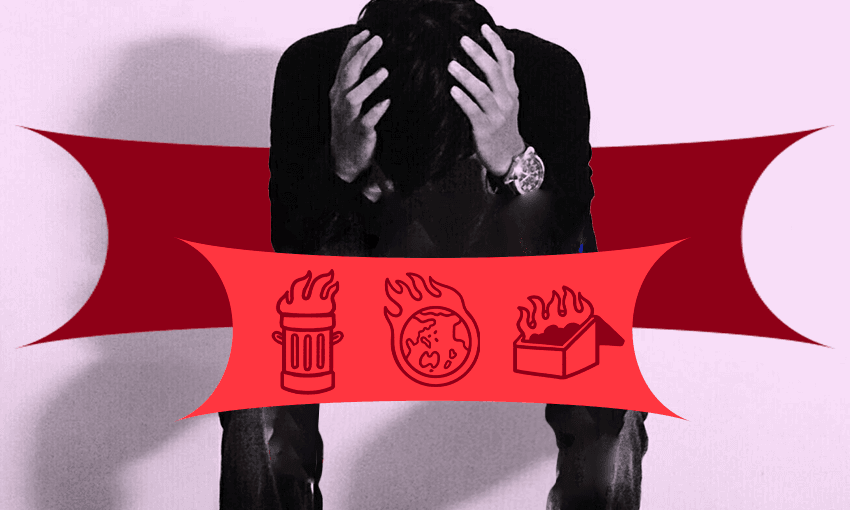 It’s very difficult to get back to normal when everything is different, heaps of it feels worse and finding someone to blame is frustratingly hard, writes The Spinoff’s publisher Duncan Greive.

Cast your mind back: it’s February 2020 and the general vibe is that every year gets progressively worse. Trump is president, climate change is rampant and layers of structural inequities are very front of mind. Our traditional institutions feel in an advanced state of decay (eg traditional media), but the new ones (eg social media) seem somehow even worse. But at least some of us have our health.

A little more than two years on, and we’re supposed to be enjoying a return to “normal” slash “the new normal” (delete them both, each is horrible). What is meant by those wholly trite words is that after two years of living with the constant threat of lockdowns and outbreaks and paying fervent attention to 1pm briefings, positivity rates and vaccination numbers, we are now living lives as they’re likely to be lived into the future.

Of that standing February 2020 reality, all of it holds, with the narrow and blessed exception of Trump having left the White House (though he is currently bookmakers’ pick to reoccupy it in 2024 – cool!). But as we emerge into society, blinking and with some weird new habits, here are some of the things that have changed:

This is the bleak backdrop to life at the present, which is making our attempts to get back to normalcy quite difficult. We’re doing many of the same things we used to, but it hits different. For the most part, Putin aside, there isn’t a clear villain. Things are demonstrably worse across many metrics, but even as we cast about for people to blame, the targets are mostly inadequate. At least during the first two years of the pandemic there was a visceral sense of a battle being fought, which focused the mind on this one big thing. Now we naturally turn our minds to this new reality, and what has fundamentally changed.

Underlying all this is that vertiginous increase in the cost of housing. Remember, the cost and supply of housing was considered a crisis well before the pandemic. Since then it has moved from severely unaffordable to “lol wut?” according to the OECD, and unless you’re a big-time landlord, that just sucks. It breaks a crucial underlying motivator of society: that if you work hard and things break your way, you will be able to buy a home in which you might plausibly raise a family. That fundamental dynamic is kinda broken – why sweat those extra hours if the promotion just means you can get a marginally better rental?

That is a lot to get your head around! That somewhat stable, aspirational thing many of our parents grew up with – it’s mostly vanished, at least in our big cities. To which some will reply, entirely correctly, that for many of us it never was a reality – that structural racism made it vastly more difficult for whole communities to pursue that dream. This is entirely correct, and the acute reckoning with our past that has happened in parallel with the pandemic is necessary and long overdue. It has also been inadequate – though how could it ever have been even close to adequate, given the scale and duration upon which it was built? These are all more reasons for everyone involved to feel bad.

During this period in which we’ve been locked inside and fearful, we have clung to social media as a way of communicating. A whole new platform has gone supernova and eaten attention, while also making all the old platforms feel a bit mildewy and washed (which also feels bad for those stubbornly still using them). Related: some non-trivial section of our fellow population has stopped believing in objective reality, which is quite a bummer and really hard on parliament’s lawn. The volume of content created escalates forever, all of us busily doing volunteer work for massive corporations, which is also quite annoying while also being near-impossible to quit.

Then over the past few weeks, all investment classes seemed to crater at the same time. Some more than others (hi, crypto, another thing that makes many of us feel bad), but all firmly in the deep red. This means that everyone with a KiwiSaver feels vastly poorer. And unlike when this last happened, in March 2020, there is no prospect of the central bankers coming to save us – because they’re the ones causing the pain with sharp escalations in interest rates.

Almost everyone is predicting a recession, with an undertow of rational belief that it’s what we need to address all the weird and painful stuff happening all at once. But recessions are really bad! Some unknown number of us will lose our jobs, homes and businesses, just so the economy can be saved. This is in part every government in the world’s fault, for pumping too much cheap money into the economy. So should we be mad at them? Maybe, but they were genuinely trying to save us all from a pandemic which emerged with no notice.

Then all the people we’re hōhā at are also annoyed themselves. The Gib people are working 24/7 to make more Gib. Supermarkets were heroes that kept us fed seemingly 10 minutes ago, now they’re villains for making too much money (literally the whole point of capitalism!). The left is mad because its support is tanking despite it having got us through the hardest situation since WWII. The right is mad because everything seems to be breaking all at once, and it blames the government.

Workers are mad because they feel poorer and would really like a pay rise that at the very least matches inflation – especially for jobs that are even less fun than they were before the pandemic. Bosses are mad because everything is getting more expensive, but many have no ability to raise prices – and their workforce has been incredibly sick for months on end and doesn’t show up to work as much (for entirely understandable reasons!).

You reading this – you’re probably mad too! It is probably because of some combination of the factors mentioned above. But it might also be at me, because I didn’t mention something you’re mad at. Or because the author is a super-privileged white dude who nonetheless is really struggling to enjoy basically anything right now (this is because everyone measures their relative happiness against prior happiness and if you have experienced decline, it sucks for you!). Or because I emphasised one thing over another, or was too sympathetic to one group over another. Or used the word mad at all!

Basically, unless you own an oil well or heaps of rentals, life is just worse now.

And I don’t know what to do with that. But I think it’s important to acknowledge all this. That there are these two contradictory vibes in the air. Firstly, that we’re supposed to be “enjoying getting back to normal”. Secondly, that nothing at all is normal, and that heaps of stuff objectively sucks.

I don’t have a lovely bow to wrap on this, except to say that it’s OK to feel this way. Honestly, it’s normal. Things really are a lot worse across heaps of metrics than they were two years or so ago. It’s not your fault. My advice to all of us is to at least be chill about feeling this way, and no guilt about not enjoying this moment all that much. If we all dig in and grit our teeth that maybe, just maybe, the world will catch a break and something better will come.

(If you’re reading this, felt something and happen to own an oil well and/or not be quite so afflicted by all this, remember that your friendly local media org is also doing it tough at the moment – so feel free to send what you can our way!)