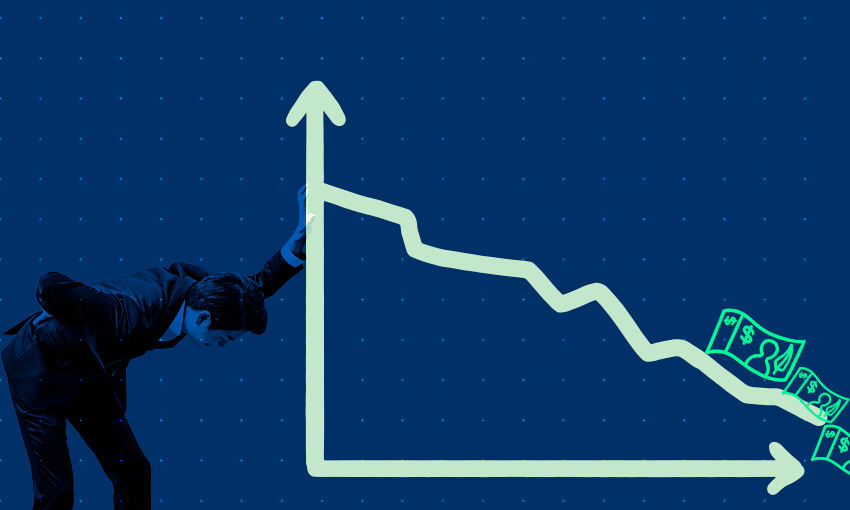 Stocks have dipped across the board in recent weeks, with investors expecting more volatility to come. Felix Walton explains what’s going on.

The first month of 2022 has been a rollercoaster for investors, with steep drops and sharp spikes defining stock markets across the globe.

In the media, economists have balked at shocking lows and cheered for miraculous comebacks. Last week, our NZX market hit an eight-month low – but that’s nothing compared to US markets, which face even bigger swings.

The S&P 500, which tracks the performance of 500 US companies, faced a shocking 7.5% drop from December to the start of last week, before bouncing back with a 1.73% increase by Friday.

While those single-digit percentages aren’t exactly sensational, for an index with a US$42.4 trillion market cap (that’s 12 zeroes, by the way) it’s a brain-meltingly enormous pile of money.

So what’s causing all this volatility?

There are a few things at play here, most prominently the looming threat of increased interest rates in the US.

When the pandemic started in 2020, the Federal Reserve cut rates to a fraction of a percentage as a way to increase spending and boost the economy. This is a common tactic to address deflation, when money is scarce, by reducing the cost of loans.

In fact, the Federal Reserve did the exact same thing after the 2008 financial crisis, which had a rippling effect that helped to stabilise the US dollar’s value by promoting higher spending.

The flip side of this is that, if left long enough, such low interest rates will almost inevitably cause inflation. That’s the issue that the US is facing right now, hitting a 7% inflation rate last month. This means the cost of goods and services is outpacing the value of the dollar, meaning its spending power is dropping fast.

To address this, the Federal Reserve needs to increase rates. It’s not a matter of “if”, it’s a matter of “when”.

This is scary for investors, as higher interest rates will cause a reduction in profits and therefore a reduction in the value of their investment. Even though these rate changes won’t have a material economic impact until at least a year later, the stock market will react much faster as investors race to cash out.

This all came to a head last week, when the Federal Reserve had scheduled its first meeting of the year. Many were expecting this to come with a rate increase announcement, which caused mass panic across the entire business sector.

Ultimately, that announcement never came. Instead, the Federal Reserve signalled its intention to increase rates at its next meeting in March. Given the severity of the situation, this coming increase could be the first of several throughout the year.

Tech is getting the worst of it

Though the entire market is experiencing volatility, it’s the tech sector that is really taking the hits. Amazon’s stock price is down 13.5% from December, while Netflix has tanked by 36% in the past month.

The technology sector in general may have been overvalued over the past year, as low interest rates and a worldwide technology boom have pushed tech companies to the forefront of our attention. Technology is seen as a growth area, and many investors are dissatisfied with how that growth has been forced to slow down.

It doesn’t help that after peaking in the public consciousness last year, cryptocurrency has experienced a massive crash since the start of December. After peaking at NZ$94,395 in November, the price of Bitcoin has plummeted to around $58,000, while other currencies like Ethereum are exhibiting similar losses.

Investors are discovering that technology isn’t a bottomless well of easy money, which has resulted in mass sell-offs.

But that’s only the tip of the iceberg

Investor uncertainty has been pushed even further by the situation in Ukraine. With Russia readying itself for an invasion, traders are fearing the possibility of a war in eastern Europe, though it’s still unclear how hostilities will unfold in future.

In an effort to deter an invasion, US president Joe Biden has threatened harsh sanctions on Russia, which are likely to ripple throughout all of Europe. Many European nations rely on Russian exports of gas and coal, which could be cut off if Russia were to butt heads with the United States.

This is not to mention the sheer cost of waging war, which would have a devastating impact on all nations involved.

This means that, for the next several weeks, volatility is to be expected. But that doesn’t mean things are falling apart.

The stock market is ultimately determined by people trying to predict the future. They’re a superstitious lot, and easily spooked. Though there are a lot of factors that could damage profits, none of these things have actually happened yet.

As the year continues, expect many of these losses to stabilise. If you need to check your Kiwisaver before then, have a drink first.