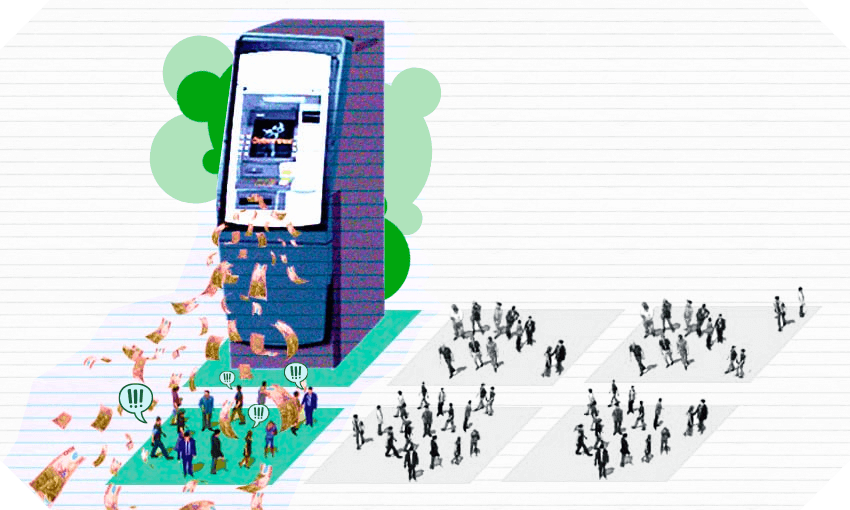 Amid calls for Covid ‘cash handouts’ to end, Bernard Hickey suggests a more useful debate: how can we get the beneficiaries of billions in unearned pandemic-era gains to hand some of it back to taxpayers?

This is an edited version of an article first published on Bernard Hickey’s newsletter The Kākā.

There was a flurry of pointless clickbaitery on Friday that seemed to capture the zeitgeist of how many on both sides of the political divide feel about this next phase of the post-Covid lockdown period. One side believes the Covid “cash handouts” should stop, but doesn’t believe the ones they received counted or should be returned. The other side is increasingly calling for the beneficiaries of unearned Covid-era gains to hand back at least some of their windfall gains to taxpayers at large, to help those hurt most during Covid.

Here’s the latest skirmish. The NZ Herald and Newstalk ZB removed an article on Friday by Newstalk ZB deputy political editor Jason Walls that challenged what he described as $20,000 of NZ Film Commission funding for a short documentary made during the first Covid lockdowns about public scientist Dr Siouxsie Wiles:

“I’m just so sick of everything getting taxpayer money for these projects. Why can’t people just pay out of their own pocket? I just keep seeing these things crop up time and time again, when we have hospitals overwhelmed. Twenty thousand dollars is not tons of money in the grand scheme of things, (but) that sort of stuff keeps adding up.” – Newstalk ZB deputy political editor Jason Walls on air last week, as RNZ’s Colin Peacock reported yesterday

An article summarising Walls’ views was published online afterwards, although removed on Friday after Wiles publicised her unhappiness with it.

“Would you pay $20,000 for a documentary about ‘science superhero’ Dr Siouxsie Wiles? Because you already did,”  the Herald’s story began.

The implication was that $20,000 of taxpayers’ money was “wasted” on publicity for a scientist. As it turned out, the $20,000 referred to was for another unfinished project and the project had actually cost the documentary maker $8,000, with a further $7,685 in funds raised via a Kickstarter campaign from the public.

I’ve just found out Newstalk ZB & the NZ Herald are running pieces that basically attack me. The harm they will cause is immense. They undermine peoples trust in my advice on how to protect our lives & livelihoods from COVID & further embolden those who harass & threaten me 1/n

Aside from the factual issues with the piece, it struck a nerve with Wiles’s supporters. It also struck a particular nerve of mine, regarding NZME’s use of publicly provided funds during and since Covid, and the apparent hypocrisy of some of its commentators about private use of public funds.

I tweeted this on Friday night in response to Wiles’s tweet.

A question for NZME's board: why did it keep the $8.6m of wage subsidies given by taxpayers in the Covid crisis, & then keep it after it was clear the crisis was over & NZME would be profitable? And why did it then give that cash to shareholders? Rather than back to taxpayers? https://t.co/yYepYwLSE8

The owner of NZ Herald and Newstalk ZB, NZME, received $8.6m of wage subsidies, which it has refused to repay (detail here via RNZ). That is on top of $4.3m of public funds from the Public Interest Journalism Fund and other public funds to pay for journalists working for NZME and specific projects over the last two years. The $12.9m in public funding helped stabilise NZME during Covid, but the company has now returned to growing its operating profits and has reduced debt substantially.

In fact, NZME is now in the process of returning $15m in cash to shareholders through share buy-backs and special dividends. It is not the only one. Fletcher Building received $68m in wage subsidy cash during 2020 and has refused to repay it, despite an increasingly robust profit and balance sheet. It paid $140m of cash dividends to shareholders in April this year after reporting solid profit growth and a strong outlook because of a boom in house building and building materials sales. NZME and Fletcher Building are just two among many large and small New Zealand companies that have refused to repay the cash, despite reporting profit growth and higher cash reserves.

Overall, the government gave $20bn in cash to companies during 2020 and 2021 as wage subsidies, but less than $1bn has been returned, which companies were supposed to do if they found they did not need it. Meanwhile, company profits have surged over the last two years, despite a sharp rise in costs and wages because of inflation. Those higher profits are due at least partly to the cash windfalls from Covid, and partly to profit margin expansion during the surge in inflation.

Profits up $25bn after $20bn of cash payments from government

The auditor general has criticised the government’s failure to properly chase up those who incorrectly kept the wage subsidy money. Prime minister Jacinda Ardern and finance minister Grant Robertson have repeatedly refused to call directly on companies to return the cash. The Ministry of Social Development  (MSD), the original distributor of the funds, has made a few prosecutions, but is spending more chasing and prosecuting beneficiaries to repay their $1bn in debt to MSD.

Then there are the unearned gains on assets

The other major interventions of the government during Covid were through the Reserve Bank, which removed loan-to-value ratio (LVR) restrictions, printed $55bn to buy government bonds to lower mortgage rates, and lent $12.7bn cheaply for banks to lend on to home buyers. Those moves were all approved by Robertson. The central bank’s deliberate aim was to make asset owners feel wealthier so they would spend, lend, invest and employ to soften the economic shock of Covid.

It worked, but it also delivered asset-owning households $621bn in increases in net worth to a total of $2.4 trillion between the end of December 2019 and the end of the March quarter of 2022, according to Stats NZ’s National Accounts data.

So Covid policies helped increase the net worth and equity of households and businesses by $824bn in 2020 and 2021 ($621bn for households and $203bn for businesses), including $378bn from the rise in residential land and house values to $1.31tn, caused largely by lower interest rates.

How to refund the Covid windfalls

There are various ways the Covid support could be refunded to taxpayers at large by business and homeowners, including simply repaying the bulk of the $20bn in cash support for businesses. It would require direct requests for repayment from the government, which we have yet to see. CTU economist Craig Renney has also suggested a windfall tax on bank profits, which are currently running at an annual rate of $6.8bn per year, and reflect the big surge in mortgage lending done through the last two years of Covid and cheap funding from the taxpayer-owned Reserve Bank.

The refunds of unearned Covid gains could also be done through a one-off 0.2% tax on the value of all residential-zoned land, which would raise around $20bn.

That combined $40bn of windfall refunds to the government could be used to both increase incomes for the lowest paid and reduce government debt, or alternatively, to invest in infrastructure to allow much greater supply of affordable housing.

I think a debate about the wealthiest returning their near-$1tn in windfall gains from Covid policies is more useful than debating whether $20,000 of public funding for a documentary on a public scientist can be justified, especially when the debater’s employer received $12.9m of taxpayer cash and is paying it all back in cash dividends to its fund-manager owners.

Bernard Hickey’s writing here is supported by thousands of individual subscribers to The Kākā, his subscription email newsletter and podcast. You can support his writing by subscribing, for free or as a paid subscriber.