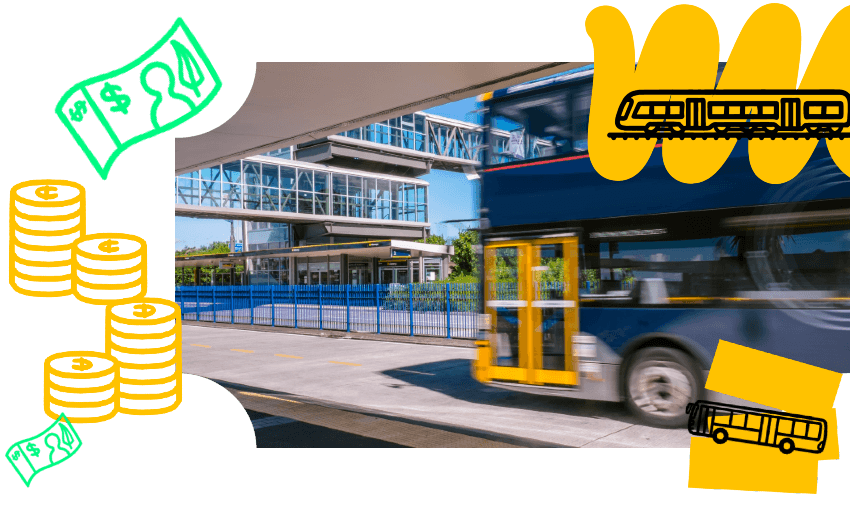 Should Auckland public transport be free?

Half-price public transport has been extended nationwide until January, but Auckland mayoral candidate Efeso Collins wants it to be free in the city by 2024. Is this just an expensive folly, or could it be the solution Tāmaki Makaurau needs?

It’s no secret our existing approach to transport has some issues. Nationally, transport emissions doubled between 1990 and 2018, and in Tāmaki Makaurau they account for 43.6% of the city’s emissions. Air pollution from private vehicles is estimated to cause the premature deaths of 400 people aged over 30 in New Zealand each year. Gridlock jams the city daily. Fuel is only getting more expensive, the burden of which falls disproportionately on the poor: transport poverty causes many families to spend less on food, not pay their rent or drive unregistered or not warranted vehicles.

So what happens if public transport becomes free? Fortunately various cities overseas have implemented fare-free public transport and their experiences point the way to what might happen in Tāmaki Makaurau.

Well, first off bus trips become faster. Buses don’t stay still for so long taking payment or waiting for passengers to tag on at the front of the bus before finding their seats. A Boston trial found free fares reduced this “dwell time” by 20%.

As you would expect, patronage rises. A five-week trial in Tasmania resulted in 15% more passengers. In Boston patronage increased 23%. Estonia’s capital Tallinn introduced city-wide free public transport for its residents in 2013, leading to a 7.5% increase in passenger numbers.

How much patronage grows depends on a variety of factors, including pre-existing levels of public transport use, pre-existing free fares for certain groups, and whether measures to discourage car use are also in place.

Considering those factors in the context of Tāmaki Makaurau suggests that free public transport would result in a significant increase in passenger numbers. Only 14.6% of Aucklanders use public transport to get to work or education each day. Free fares exist only for the elderly and the young. A regional fuel tax is already in place and congestion charging appears to be slowly creeping towards political acceptance.

An increase of 10% in public transport use in Tāmaki Makaurau – a conservative estimate given the circumstances – would result in 27,000 more trips each day. No doubt some of those extra passengers would be walkers or cyclists who just can’t be bothered that day, or people who wouldn’t have travelled at all but for the free fares. But given the very high levels of car use in Auckland, it’s reasonable to predict that plenty of commuters would switch their fuel-hungry cars for free buses or trains.

The benefits of ditching those cars are not hard to predict. Transport emissions would drop. Air pollution would improve. Gridlock would lessen, smoothing the way for buses and the remaining cars on the road. Should Auckland introduce a congestion charge, the impact of these benefits would grow further.

Those who suffer from transport poverty, often pushed to the city’s margins by high rents and gentrification, would find the city and all its jobs are open to them. And the money not spent on fares or petrol? Instead of going to the state or oil companies, it could support other areas of the economy.

While that all sounds pretty good, there are a couple of quite large caveats.

There are concerns about the network’s capacity to handle a sudden spike in demand. Collins clearly thinks it could, stating that he wants a fully free public transport network by July 2024. But if parts of the network are already reaching peak capacity, it could become overwhelmed, potentially turning nascent passengers away from public transport for good. Such a scenario would be particularly hard on bus drivers, who are already subject to high levels of abuse from disgruntled passengers.

Then there’s the million-dollar question: how much will cost? Obviously that depends on many factors, not least of which is how many people switch to public transport. The government set aside $27.1 million in the May budget to extend half-price fares, initially planned for three months, for a further two. They’ve now been extended to January 2023, at a cost of $63.1m. Using the initial budget figure, a crude estimate is $325 million for a year of free public transport nationally, although that doesn’t take into account the capital investment required to improve public transport networks or the likelihood of more passengers. The Herald reported an Auckland Transport estimate that an extra $500 million would be needed annually by 2030 to deliver free public transport across its network.

Whatever the final figure, it’s going to be a lot of money. But of course, as National leader Christopher Luxon learnt earlier this year, we already subsidise public transport. Revenue from fares contributed just 29.5% of Auckland Transport’s operating costs, with much of the remainder coming from a mix of local and central government funding. We wouldn’t just be funding this thing from scratch.

Funding for public transport – both operational and infrastructure – from the National Land Transport Fund was just under $2 billion in the 2020/21 financial year, which doesn’t include specific budget initiatives such as support for the City Rail Link. In that context, funding for free public transport would not necessarily be a huge increase, proportionally, to existing central government support.

Should Aucklanders vote in Collins in October, the government will have some tricky decisions to make. Recent polling in Auckland indicated widespread support for free public transport. With a tight national election expected next year, keeping on good terms with the many voters in our largest city will be near the top of the government’s priority list. On the other hand, it will be reluctant to give more ammunition to those who accuse it of being fast and loose with public money.

Of course, it’s not all about the money. When you consider the potential benefits – fewer emissions, healthier people, reduced transport poverty and a more functional city – free public transport could be one of the most sensible radical ideas yet. If Efeso Collins becomes the next mayor of Tāmaki Makaurau we might just find out.

The author wishes to acknowledge the work of Dr Jenny McArthur, whose excellent report Fare Free public transport – The case for going fare-free in Tāmaki Makaurau and lessons from international case studies informed much of the content of this article.