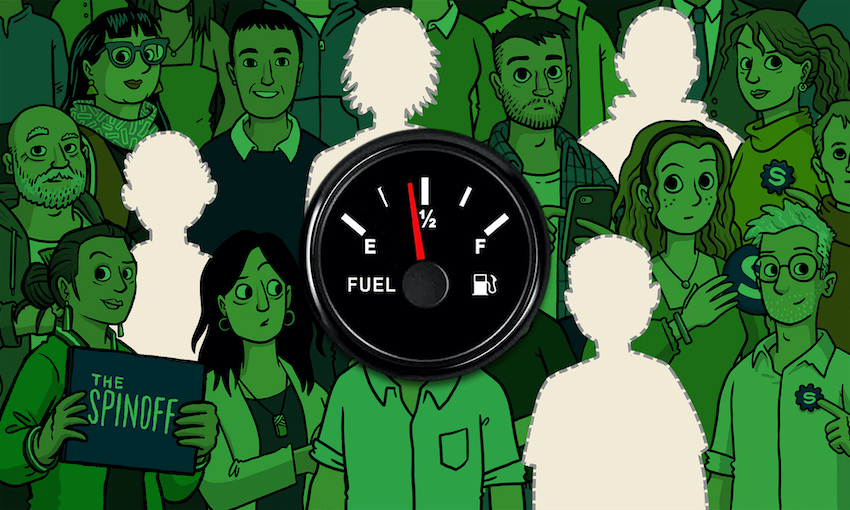 As we head into a truly chilling winter, every little bit could help make the difference. If our work means something to you, please consider donating to keep it sustainable.

I’m Duncan Greive, founder and publisher of The Spinoff, with an important message covering what we see as our role for society – and how you, our audience fit in – as we move into this freaky and (hopefully) exciting new era.

I’m writing to explain the role of members to The Spinoff, and to ask that if you value our work, to please consider donating to help make it sustainable.

The Spinoff has for three years operated a membership programme, which allowed us to remain free of a paywall thanks to generous donations from our audience. I’m writing today because, to put it bluntly, thousands of readers have stopped donating over the past year. The last time we had so few regular donors was March 2020, when we were a much smaller organisation. Since then we have grown to meet the enormous demands of the pandemic, creating work that impacted millions of people all over the world in the process. That was what prompted thousands of you to donate, and if you hadn’t The Spinoff would not have survived. It really is that simple.

Yet while the generosity of our members has led to growth, a number of new roles and much more comprehensive coverage, it’s also meant that without sustained support, it’s impossible for us to maintain our current scale and scope. We simply cannot replace the income that comes from members.

This is in part because we made two decisions right at the start that inform our approach. That we would be free to all, and be a magazine. That we would publish far less and more selectively than the big news sites, and try to have a specific and recognisable voice and approach. That calm, analytical quality – with flashes of humour – that you have grown to know. Even though we have incorporated some elements of news in The Bulletin and live updates, at our core we remain a current affairs magazine.

On one level I understand why our membership has dropped away. There’s a cost-of-living crisis, and inflation has made life hard for many of us. More than that, the urgency of the pandemic kept us glued to our phones, and at times made quality reporting a matter of life and death. As we move into this new era, I think we’re all suffering from a certain malaise – somewhat glad to be moving into a different phase, but also feeling like something specific and indefinable is missing from our lives. It’s totally normal to feel like you don’t need to support your local media organisation at a time like this.

The promise we’re making to you is that The Spinoff is actually better suited to this era than the pandemic itself. We pivoted to becoming a news organisation in March 2020, and learned a bunch of new skills along the way. Of course we will continue to write about Covid-19 and the many profound effects it’s having on society – but our plan now is to return to something more of what made us, which is coverage of culture, politics, business, te ao Māori and more with heart and humour. We have a new editor and a new site, and will do our work across features, essays and opinion pieces, but also podcasts, comics, video and newsletters. We are here to help walk you through this new era, and feel well-suited to being your guide.

But we can’t do it without you. The Spinoff has been cut out of the government’s enormous $100m-plus Covid-19 campaign, one that has been a boon to the big media companies and social media platforms. We returned the wage subsidy, unlike almost every other media organisation. The public interest journalism fund was narrowly targeted and is winding down. The big tech companies are refusing to do what they did in Australia and make meaningful deals with local media. And the recessionary drums continue to beat more loudly by the day, impacting the commercial spend which we rely on to pay the other half of our wages.

Honestly, writing a message like this is not easy, nor natural for a media organisation. In this industry, we try and present an image of ourselves as doing great at all times. But from the start with The Spinoff we’ve tried to be honest about what we’re up to – what we’re seeking to do, and your role in it. We think having thoughtful coverage of this country is good for all of us – but that we don’t all have the same ability to pay for it. Keeping The Spinoff free for all costs money, and it requires both commercial partnerships and a consistent amount in donations from those of our readers who can afford it.

All of which is to say that we need your support more than we ever have right at this very moment. Whether it’s a one-off donation, or ongoing support. Whether it’s a few dollars, or a more substantial amount – every little bit could help make the difference as we head into a truly chilling winter.

Thanks for taking the time to read this, and, if you’re able, for your donation. It means everything to us that people pay money to keep us free, open and independent.

Founder and publisher, The Spinoff