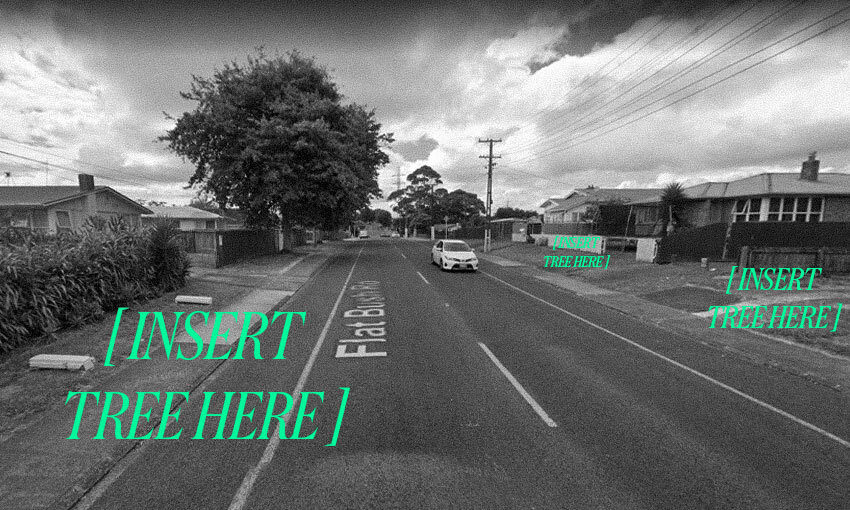 Is it time for council to throw South Auckland some shade?

To many it might be a leafy paradise, but for those in the south of the city, Auckland can seem more like a barren, concrete-covered desert. However, as Justin Latif reports, new council funding may change all that.

Mayor Phil Goff wants to throw some shade on South Auckland. No, he’s not about to slide some criticism into your DMs, rather he wants to see the tree canopy in the area increased.

According to Auckland Council data, the region has the lowest coverage of any area in the city, with Māngere-Ōtāhuhu and Ōtara-Papatoetoe Local Board areas having 8% and 10% respectively. In comparison, the Kaipātiki Local Board area on Auckland’s North Shore has canopy coverage of 30%.

It’s mid-morning when I meet Goff, Manukau ward councillor Alf Filipaina and a bevy of staff at a playground in Māngere East’s Sutton Park. Halfway through our chat, a council officer informs us the temperature has just ticked over 33 degrees, further underlying the purpose of our interview.

Given that 2021 was the hottest year in New Zealand since records have been taken, Goff says increasing the numbers of trees isn’t just about creating a greener aesthetic, but reducing the city’s overall carbon emissions.

“I grew up in this city and the thing that I remember as a student most of all is in the hot summer months, those beautiful trees down Symonds Street and Princes Street, which created a great atmosphere,” he recalls.

“And the trees themselves, through evapotranspiration, also have a cooling effect on the area.”

Goff says that South Auckland’s low tree coverage is largely due to central government not prioritising the issue when it built tens of thousands of state houses during the 1960s and 70s.

“I kind of grew up between Māngere and Ōtara, as I was a Papatoetoe boy and my wife is from Māngere,” he says. “These suburbs were just never greened and the biggest landlord was Housing New Zealand, or Housing Corp as it was then, and it was just never part of the thinking in those days. But times are changing. People expect more and the climate is getting hotter.”

The new policy aims to plant a further 15,000 native trees at a cost of $13.3 million, funded by council’s newly proposed climate action targeted rate. Environment and climate change committee chair Richard Hills says it’s a great achievement to get this extra, climate-focused funding, which also speeds up the electrification of ferries and buses and provides more bus routes.

“I was proud of the $150 million in the 10-year budget as it was a pretty significant step up from where we were, but this package provides about $570 million, so it’s more significant. This package is not just a climate plan but it’s also a significant shift in the transport space.”

He says the policy “will significantly improve air quality and the impact of stormwater” because “when you’ve got no trees, the water just runs straight off [the road or footpath], and straight down the drains and straight into the harbour”.

Manukau ward councillor Alif Filipaina says his region’s tree coverage has been a constant bugbear of his and he’s pleased it’s finally being dealt with.

“I’ve been saying we need to do something for years so it’s great we’re now at a stage that we can get something done.”

Filipaina and Goff envisage the plantings will involve schools and local sport clubs and the trees themselves will be eight to 10 years old when planted, and 1m-1.5m tall natives, so the benefits will be realised sooner.

“Quite often in the past when trees were planted, they haven’t been planted well and they’ve died,” Goff warns. “You can go in and do things in a cheaper, nasty way and find that it doesn’t work at all. Or you can do it thoroughly, professionally, with proper consultation with your community, and you can get it right – and we’re intending to do the latter.”

Gareth Hughes on Jeanette Fitzsimons' life, her political legacy, and the concerns she shared with him about the post-2017 Green Party.
By Toby Manhire
Editor-at-large
13th June, 2022

Kris Faafoi is leaving, Poto Williams is demoted, and Trevor Mallard is leaving the country. What does it all mean, and is it really 'minor'?
By Toby Manhire
Editor-at-large
Opinion
13th June, 2022

A good local board is a diverse local board.
By Toni van Tonder
Guest writer
10th June, 2022

What IS the appropriate response to being gifted a Powderfinger LP?
By Andrew Geddis
Contributing writer
Opinion
9th June, 2022

Accusations of asset theft and racist fear-mongering risk stranding the three waters reform programme, with future generations the ones who will suffer.
By Mike Chatterley
Guest writer