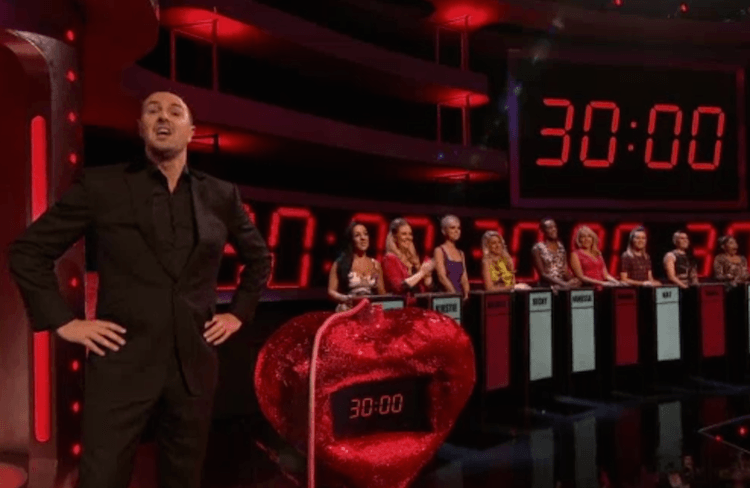 Appointment Viewing: Romantic Elevators, Heart-Shaped Bombs and Love at First Light in Take Me Out

Alex Casey watches TV2’s new show Take Me Out, a chaotic dating competition where one man catches an elevator and thirty women use lights and fire poi to communicate their feelings.

Take Me Out is a fast-paced, lightbulb-based dating show, hosted by world’s most Irish person Paddy McGuinness. His wisecracks pour out crazy fast, almost everything he says is an imperceptible pun of some kind. “It’s the Manuary Sale!” he beams, the roaring canned laughter drowning out any thoughts you might have had about it actually being the end of June.

The sale merchandise that he is referring to is the small gaggle male suitors waiting at the top of the love lift which, by all accounts, is just your bog standard lift. The suitors take their turns to descend, and through a preposterous light-based elimination process, end up with one match to take to the Isle of Fernando’s. They talk about this place like it’s a real place, but I don’t think it’s a real place.

There’s 30 female contestants, by the way. They pour out, all dancing like the drunk person in the club who just heard the song they requested hours ago. Enthused, but unsure of how to best express it. There’s millions of them. “I’ve had 30 jobs”, one boasts for some reason, just as another makes a loud dolphin noise.

You can almost feel their false nails snapping as they claw for attention. Contestant Lucie swiftly takes the spectacle cake. She whips out some sort of homemade fire poi and starts doing a jig to ‘Sex on Fire’. I can handle most stuff, but this is the dictionary definition of ‘a bit much’. Enough introductions girls, it’s time to hit your podiums of partiality. And meet the first suitor.

The love lift descends, and I haven’t been filled with this much elevator-based anticipation since this bit in Silence of the Lambs. He prances out, a jumbo ripped version Jack Tame.

It’s now Jumbo Jack Tame’s job to share some things about himself. As he reveals more and more, the women can choose to turn their love lights off if he isn’t the TVNZ lookalike for them. A woman switches her light off because she only likes chubby men. Jumbo Jack doesn’t seem to mind, he’s far too busy embracing a lovelorn/suitably confused audience member for zilch reason.

After Mr Tame has revealed his deathly fear of rollercoasters, there’s still a bunch of women still massively horned up for him. So he launches his next personality showcase – traversing a giant rope across the studio to diffuse a love bomb that’s counting down. To what? He’s got time to knee Paddy in the balls on the way, so it can’t be that urgent.

The women are still into him after this tremendously pointless display, with only a few love lights switching off. Everyone knows that the number one quality that women look for is the ability to stealthily diffuse an enormous heart-shaped novelty bomb.

It’s down to two women. Jumbo Jack Tame gets the power back now, able to choose his favourite sheila based on the following question. “What would you be if you were a dinner?” Paddy says.

Which contestant would you choose?
a) “A sweet potato because I’m soft, sweet and orange” or
b) “An onion. I’ve got a fun side, a sting, and I’m soft when you cook me”

I’m scared. I think the second woman might ACTUALLY be an onion. Also, wtf is the fun side of an onion? I guess this could be considered a bit of fun. He chooses the sweet orange potato woman, walking over and unceremoniously switching off Madame Onion’s light. The happy couple the head to the lift and off to the Isle of Fernando. Wherever or whatever the hell that is.

The next suitor comes down to the loudest version of ‘Love and Sex and Magic’ I’ve ever heard in my life. He’s an amateur magician called Magic Steve who looks like Sonic the Hedgehog.

All but one of the women switch off their lights immediately. As do I. Did I say light? I meant TV. That’s too much real love for one night.

Elevator enthusiasts, fake bomb enthusiasts and lightbulb technicians. If you like dating shows like The Bachelor, but don’t like the dates and the normal conversations and glaring lack of fire poi – this could be the show for you. It’s that very particular type of trash that only the UK can do so unashamedly well.

Through all the mayhem in having 31 thirsty love sponges on stage, Paddy McGuinness is exceptional host talent. If you love puns that barely make sense and an Irish accent that just won’t quit, he’ll charm you to bits.

It’s too fast, it’s too false, it’s too loud. Watching it feels like being really hungover at a shonky circus.

How should I watch it?

For an immersive experience, why not enjoy it on TVNZ Ondemand in your nearest lift? Or go on a long and futile version to find the fictional Isle of Fernando’s.

Should I get into it?

Tune in for the psycho spectacle and the absolute absurd game show premise, but be warned that by the end you’ll probably be having about as much fun as an onion.

Take Me Out airs on Monday nights at 9.30pm on TV2