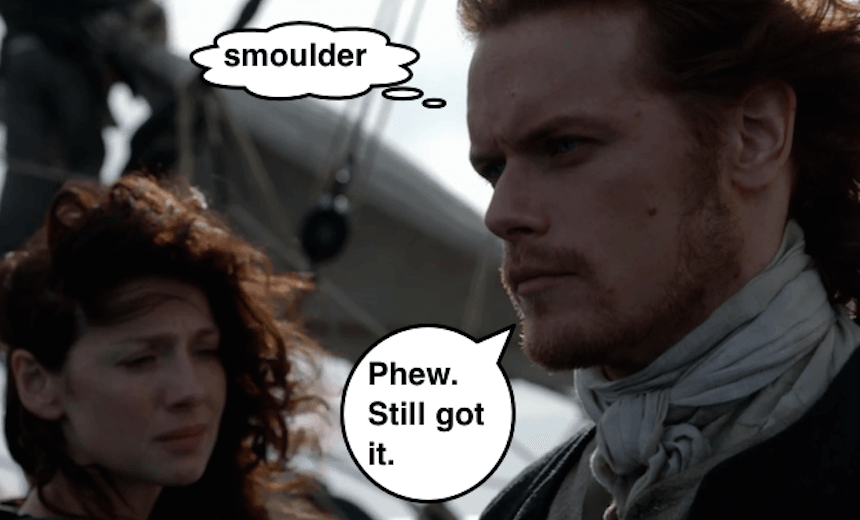 Outlander Recap: Jamie and Claire Have the Last Huzzah in ‘To Ransom a Man’s Soul’

Tara Ward recaps the final episode of Outlander season one, wherein the coos save the day and Jamie and Claire look towards rebuilding and smouldering.

At last glance, Jamie Fraser was trapped in the living hell that was Wentworth Prison – with Black Jack Randall using his tongue to sign his name across Jamie’s back. Thankfully, Claire had another plan up her sleeve. She knew someone who knew some cattle, and the rest was obvious. Or was it?

We begin with one heck of a hullabaloo in the Wentworth courtyard. There’s flutes atootin’, drums abangin’ and rifles cocked aplenty. This was not the sort of abangin’ and acockin’ that I was expecting, given where we last left Jamie. “Huzzah!” the English shout as the Union Jack is raised. Indeed.

Meanwhile, the other Jack at Wentworth greets the dawn with much less pomp and ceremony. Randall saunters about the cell naked, while Jamie lies nearby, dazed, damaged and desperate to die. Black Jack is distracted by a noise outside. I am distracted his full frontal nudity. (Is it wrong that I rewound to watch that bit again? It is? Okay, then it didn’t happen).

Whatever could that noise be? It sounds like…Why, it sounds like a bunch of highland cattle, RUNNING DOWN THE CORRIDOR!

“Huzzah!” cry the hairy coos, as they stampede their way through the prison. I’m sure one was even playing the bagpipes. “Huzzah!” they roar as they trample over Randall, leaving him unconscious beneath a heavy door. “This is for what you did to Jamie Fraser! And this is for eating my brother!”

Murtagh, Ant and Dec bring up the rear of the stampede, searching for Jamie. “We’re getting you out of here,” growls Murtagh, flinging Jamie over his shoulder with ease. Murtagh is a strong, loyal man with a generous heart. A memo to Julie Christie: I think I’ve just found your next Bachelor.

Claire is anxiously waiting, looking fantastic in a pair of high-waisted breeks. Next thing she’ll be riding a bicycle and campaigning for suffrage. Ant or Dec drive them to the safety of a nearby abbey, where Claire is warned that while Jamie’s wounds will heal – his soul remains in turmoil.

Loving this more than a haggis and a wee dram? Click here to go back in time and read the rest of Tara’s Outlander recaps

Claire asks Jamie what Randall did to him. “Too much, and not enough,” Jamie replies. We flashback to discover what happened in that cell, and it’s not pretty. “Dear God,” says BJR to Jamie. “You are a magnificent creature.” Black Jack, that’s what I’ve said in every recap this season. If you weren’t such a reprehensible beast, perhaps we could have been friends.

The flashback rape scene is brutal, unforgiving and horrific. If there was any time I needed a bunch of cattle to burst through the door and trample that bastard Black Jack to death, this was it.

After fixing Jamie’s mangled hand, Claire seeks solitude in the monastery chapel. Father Anselm joins her and offers to hear her confession. This will be a doozy, Father, so you’d best make yourself comfortable. She begins by mentioning her two husbands. Save some good bits until the end, Claire – you don’t want to peak too soon!

Once Claire starts, she’s like the Clyde Dam spillway – everything comes pouring out, including the time travel, Black Jack and Tits McGee. Sheesh, thinks Father Anselm, I only came in here to light the candles.

“How marvellously extraordinary!” says Father Anselm, once Claire has finished. This is a much better reaction than “die you devil witch child,” as per Father Bain. He reassures Claire that this situation is not her fault, and “whatever your sins might be, have faith that they will be forgiven.” Thank God, because I just told my five year-old there was no chocolate brownie left and then I hid in the pantry and ATE THREE GIANT PIECES.

Meanwhile, Jamie sees death as a happy release from his inner torment. Murtagh has a Gaelic man-to-man with Jamie, urging him to fight. “Your hot wife put on a fantastic pair of pants and trained a herd of wild cattle to hunt Randall down and trample him to a snivelling, whimpering puddle of nothingness. That’s what you’ve got to live for, Big Red! Huzzah!”

Murtagh reckons the only way to save Jamie is for someone to step into the darkness with him. Jesus, thinks Claire, I already sorted the cattle and now you want me to save his soul? Do I have to do everything round here?

Claire gives Jamie some tough love in an effort to find his will to live. As Jamie reveals his shame, Claire says she would rather die than live without him. This startles Jamie into reality. “How can you have me like this?” he sobs. “I will have you any way I can, always” Claire replies.

Murtagh encourages Claire to take Jamie to France, where there are both MacKenzies and Frasers to provide shelter. “Oui,” she agrees. Ant and Dec say their goodbyes, making the most of the opportunity for a quick grope. “Huzzah!” Ant or Dec says. “Piss off, the lot of you,” replies Murtagh. I totes love him.

The fresh sea air perks Jamie up no end and he smoulders his way around the boat. Claire and Jamie make idle chit-chat about things to do in France (FYI, the double-decker bus tour of Paris is great). Nek minnit, Claire suggests they try to stop the 1745 uprising. Whoa now, Claire. I like your optimism, but I’m not sure there’s a herd of wild cattle big enough to stop THAT war.

“We can do anything, as long as we’re together,” she persuades Jamie. “That will take some thought,” Jamie’s mouth replies, but his shifty eyes say “Jesus, if I haven’t been through enough this week, now my crazy hot trouser-wearing wench of a wife wants to feckin’ well change the future”.

One more thing: Claire’s pregnant! Jamie is so delighted that his legacy of chiselled cheekbones and tousled hair will be preserved for the world to enjoy forever more, that his shifty eyes practically dart their way out of their sockets.

At last, it’s anchors away! Let us bid au revoir to Cla-mie as they sail off, cheek to cheek, into a sea of romantic clichés. Take good care of Murtagh, and we’ll see you in 2016. Or is that 1745? Or 1967? Or will we see you at all, if you succeed in changing history? Well, whatever. Until next time…huzzah!

Want to fall back through the stones to the very start of it all? Click here to watch the full season of Outlander on Lightbox today.