Covid-19 lockdowns created a never-before-seen scenario for the world’s wildlife – a break from us. But that wasn’t always a positive, as Mirjam Guesgen explains.

With people staying home and travelling less, bird song crescendoed, wild cats suddenly started roaming the streets of Chile and Florida’s loggerhead turtles finally got a chance to lay their eggs in peace. On the face of it, you’d think nature is doing pretty well without us.

Not so for the protected seabirds of one Swedish island. Without tourists flocking to the island, local, once-threatened birds (called common murres) were sent literally running off cliffs, fleeing in the wake of an influx of eagles.

The island example shows that ecosystems are complex and that conservation isn’t just about removing ourselves from the equation – a lesson that could have repercussions for how New Zealand handles its own threatened birds. 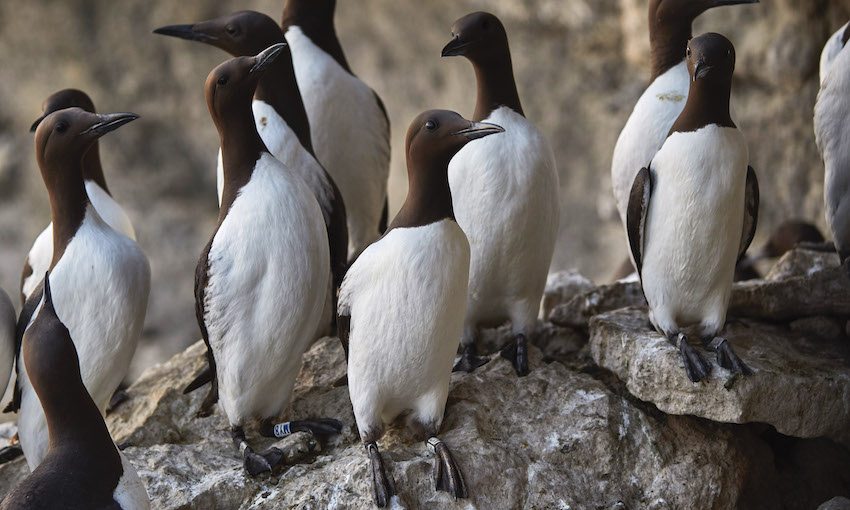 Here’s what was going on. The Swedish island, Stora Karlsö, is a refuge for common murres and the island’s protection allowed the previously dwindling murre numbers to triple. The booming bird population also attracted thousands of tourists to the island each summer.

After Sweden imposed its Covid-19 restrictions at the end of March 2020, tourist numbers to the island plummeted from around 75 people a day to fewer than 10. When the people moved out, local sea eagles moved in.

Without people disturbing them, the eagles were free to swoop aggressively past the murre-dotted cliffs. The murres panicked. They leapt off cliffs, sending their eggs tumbling off the cliffside behind them in the flurry.

“It was quite shocking,” says biologist Jonas Hentati-Sundberg, who was monitoring the birds during lockdown and was curious about what effect the lack of people would have. “You could really hear the sound of thousands of birds leaving at once. It was blind panic.”

Hentati-Sundberg and his colleagues reported that murre disturbances by eagles were happening more often and for longer during lockdown. In a nutshell, the eagles were acting weird.

And the panicked fleeing and egg-tossing that came with it led to a 26% reduction in murre breeding success that season. Who wants to get busy or look after your egg when you have a terrifying neighbour dive-bombing you?

If this pattern continued in years to come, it’s unlikely the murre population could sustain itself, Hentati-Sundberg and others concluded. Tourists were acting as seabird guardians, they say.

It might be counterintuitive that the presence of people was actually good for conservation, but people are as much a part of natural ecosystems as birds are, says New Zealand conservation biologist Kevin Parker.

“I think for a lot of birds, anyway, they’re pretty indifferent about us if they’re getting what they need in terms of food and a safe place to nest.” Could something similar to Sweden happen in New Zealand? Possibly. “The pattern we’re seeing probably is happening in other places in the world,” says Parker.

There are certainly examples here at home of birds picking on other birds. Parker cites native harriers being controlled to stop them nabbing threatened birds and the fact the presence of magpies makes kererū and tūī act shyer.

But conservation is complicated, says Parker, who’s been involved in moving native birds to and from Aotearoa’s island sanctuaries for more than 25 years. “I don’t think I’d extrapolate to say that humans are vital for all seabird colonies. That’s a bit of a stretch.”

Parker also doesn’t shy away from the fact that people have had a pretty negative effect on birds generally, either directly by removing their habitats or indirectly by introducing rats, stoats and other nasties that prey on them.

Both Parker and Hentati-Sundberg wonder too whether the effects of a lack of people on Stora Karlsö will last. The eagles and murres probably spent some time together on the island before people arrived, explains Parker, so the murres might naturally have a way to cope but have slacked off in recent years with the protection from human helpers.

Hentati-Sundberg’s team is now waiting until 2021 to see what will happen. “Will things go back to normal? Or will seabirds get used to the eagles if their numbers stay high?” he ponders. “This is fascinating… you never know what is around the corner!”