Scientists say that 5G is safe, but a small, vocal group of people insist it causes cancer. RNZ’s Susan Strongman speaks to two of the rollout’s most rowdy opponents.

Sue Pockett and Stephanie Honeychurch are puffed up like sparrows waiting for me as I disembark from the ferry on Waiheke Island. It’s a cold, drizzly morning, but they are both smiling as they shake my hand. They say they’re glad I’ve come to speak with them, and they’re happy to be taken seriously. They say that dissenters like themselves are ridiculed by the media as tin-hat wearing conspiracy theorists.

“It’s an easy label,” Honeychurch says. “But that’s bigoted people who don’t look at the research.”

The three of us pile into Pockett’s little white Ford, which she unlocks using the key. She used the remote until recently, when she noticed her thumb joint hurting. Inside the still-parked car, Pockett – who has a PhD in neurophysiology – explains her employment background.

It is, she insists, strictly off the record. Why it’s off the record is also off the record. She won’t be photographed either. (She has short-ish brown-ish hair, crystal brown cat eye glasses, and wears a pale blue cap with a slightly wonky peak.) At present, she is an honorary academic with the University of Auckland’s psychology department. She’s dedicated the last two years of her life to researching the health effects of radiofrequency (RF) radiation.

RF radiation – a type of non-ionising electromagnetic radiation – is near-unavoidable in our daily lives. It’s how TV and radio is broadcast, it’s how wifi and cellphones transmit. It’s GPS and radars and the smart meters attached to the side of our homes. It’s those things on top of Auckland city’s lamp posts that look like upside down coffee cups, and it’s what’s spat out of the cellphone towers that nobody wants in their backyards.

Some people get RF radiation facials, but it’s also how microwave ovens heat things and what your Bluetooth headphones use to connect to your phone. And yes, it’s that button you push to unlock your car – like the one Pockett removed from her keyring. 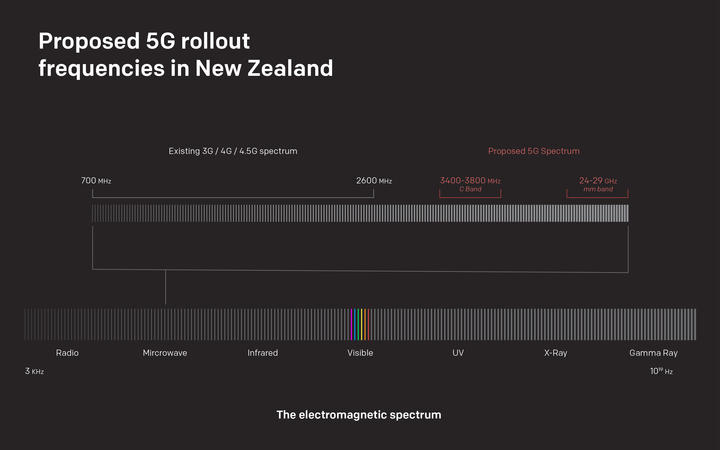 Most people don’t worry about RF radiation, since organisations like the World Health Organisation say we should be okay. But Pocket and Honeychurch do, and they are not alone. There are anti-5G and RF radiation movements around the globe. On Waiheke, the 5G-Free Facebook page created this month has 53 members. Nationwide, one petition to stop the rollout has more than 8000 signatures, while another has 1800.

There’s 5g.org.nz (tagline: “Stop 5G before it stops YOU”,) and an international appeal to stop 5G “on earth and in space”. Last year, the wealthy, predominantly white area of Mill Valley near San Francisco banned the installation of 5G transmitters, despite there being no plans from telcos to do so.

In 2015, an open letter to the UN was signed by several hundred scientists from countries including Armenia, Australia, Brazil, Finland, Iran, Nigeria, New Zealand, Turkey, the United Kingdom and the United States. The letter says that “numerous recent scientific publications have shown that electromagnetic fields affect living organisms at levels well below most international and national guidelines”.

Pockett says at present, RF radiation exposure can be kept to a minimum. She does not wear a tin hat, but she has disabled the wifi in her modem and had her smart meter downgraded. She hasn’t owned a cellphone since the 1980s, when the brick in her handbag wiped the credit from her photocopy card, and she doesn’t live by a cellphone tower.

But she fears that the introduction of 5G to New Zealand will make RF radiation unavoidable, even for her, as cell sites become progressively smaller but more numerous. “There’ll be no escape from 5G,” is how Honeychurch puts it. “It’ll even be in the Antarctic. The whole planet will be blanketed with a substance that is officially unsafe… It’s completely insane.”

They want the 5G rollout – which is scheduled to go live in Auckland’s Wynyard Quarter on 1 July 2020, just in time for the America’s Cup – to stop. They’ve written to, and met with numerous politicians over the years, and have lobbied the Waiheke Local Board, which has written to the council requesting that a precautionary approach towards 5G be adopted until evidence of the effects is “well understood.” (The council has passed the board’s concerns on to Communications Minister Kris Faafoi, who would not be interviewed for this article.)

But Pockett and Honeychurch say no one in power is listening to them. 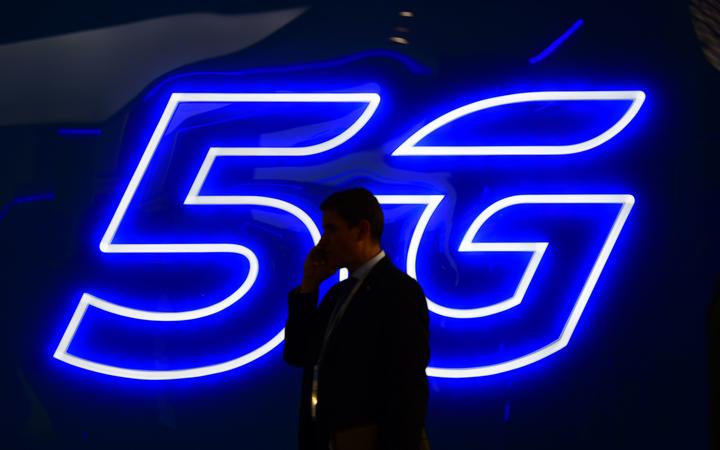 A man speaks on the phone next to a 5G hotspot sign displayed at the Mobile World Congress in Barcelona in February. Photo: AFP

Non-ionising RF radiation has been classified as “possibly carcinogenic to humans” by the WHO, alongside a diverse list of things including kava, lead, ginkgo, petrol, Asian pickled vegetables and carpentry. This means there could be some risk, so a close eye should be kept on any link to cancer being found.

A large number of studies into potential health risks of RF radiation from cellphones have been done in the last 20 years, and the WHO says no evidence of harm has been found. This has satisfied New Zealand’s Ministry of Health, which is responsible for setting RF radiation exposure limits here.

Pockett and Honeychurch sit at the other end of the spectrum. They say the exposure limits that are used in New Zealand and most other countries are too high. (“Like setting the driving speed at 1000kmh.”) They have taken me up the hill to a cafe in Oneroa, where they share their grave concerns. (Pockett doesn’t usually go to cafes, she says, seconds before she whips an electrosmog meter out of her pocket to measure the radiation emitted from my iPhone, while loudly exclaiming, “Whoa!”)

The pair believe RF radiation should be definitively classified as a carcinogen, alongside substances like asbestos, alcohol, the pill and ionising radiation like UV, X and gamma rays. We are joined by their friend Susi Newborn, who believes the breast cancer she is recovering from was caused by her habit of keeping her phone in her bra. (“That was the wages of your sin,” Pockett tells her.)

Pockett says there is a multitude of science to counter what the WHO says, and that RF radiation indeed does cause cancer and other health problems. “It’s undoubtable now. It’s indubitable. It’s very clear. They should be group one carcinogens… This really is a disaster in the making. I predict that in a few years we’ll see an epidemic of dementia starting in middle age… It’s a mess. It really is a mess.”

How valid are their concerns?

In the late 1990s, due to the increasing use of mobile phones, the Interphone study was commissioned by the WHO to look for links between cellphone use and cancer. The study, across 12 countries, included a New Zealand contingent led by University of Auckland professor of epidemiology and biostatistics Alistair Woodward. The conclusion, Woodward says, was that there was no definitive evidence of a link between cancer and cellphone use.

Since Interphone concluded nearly 10 years ago, the professor has kept a close eye on the science – particularly anything showing an increase in cancers that might be caused by cellphones. He says there’s been nothing. “It’s now 20 years or more since cell phones began to be used very widely. And that’s long enough, we think, for a problem to emerge if there is a problem.”

Honeychurch is not buying it though. “It’s bullshit science to try and obscure the issue whilst ignoring peer-reviewed research.” Pockett rolls her eyes and shakes her head when Interphone is mentioned.

She believes there’s been a concerted disinformation campaign by the communications industry, whereby scientists are contracted to replicate and discredit studies that show RF radiation causing harm. She’s written a paper about it. “It’s pretty clear that most of the papers saying there’s no harm are funded by the industry.”

Pockett also believes the WHO can’t be trusted, and nor can ICNIRP – the international body charged with advice and guidance on non-ionising radiation. “The WHO is supposed to be taking care of the health of everybody in the world, and it’s been captured by these lunatic corporations, and it’s just… It’s ruining the planet. It really is.”

“Industry apologists,” Honeychurch adds, “people like Martin Gledhill, will say that the weight of evidence shows that there’s no harm. And it’s true – there are many hundreds of studies that don’t show any harm. But when you look at them, they’re usually funded by the industry itself.”

When, the following day, I ask Martin Gledhill, a Christchurch-based scientist who measures electromagnetic fields for a living, if he is an industry apologist, he sighs audibly. “Well, the simple answer is no. I base whatever I say on what the research says, not what a telecommunications company might want me to say. In fact, a telecommunications company has never come to me and said, ‘Martin, please. Could you say this?'”

And regarding the WHO and ICNIRP? “For all the times I’ve heard those sorts of statements made, I’ve never seen any good evidence to support them.”

The conflict of interest question “is a really important one,” Woodward says. “It’s necessary to bring it up all the time, because we do approach these things with particular expectations and presumptions.”

Using examples of asbestos and tobacco, he says there’s a long history in environmental health of conflicts of interest that were not declared and may well have influenced the sorts of conclusions that were drawn from studies. But he doesn’t think it’s fair to say the same about the WHO. “With the Interphone study [the WHO] took considerable pains to identify conflicts of interest and to report them where they existed… I don’t think that conflict has significantly perturbed the direction of the research or the conclusions that have been drawn from it.”

As long as Pockett and Honeyfield believe their health and the health of others is at risk, they refuse to be reassured by organisations like ICNIRP, the WHO and the Ministry of Health. Pockett, who has published two papers on the risks of RF radiation in the last 12 months (the first ran in the New Zealand Medical Journal in December last year), says that over the last two years she’s spent most of her time thinking about it. Before that, she wrote several papers and a book on the nature of consciousness. Why RF radiation now?

“Until now, yes it’s been a problem and people have been complaining for years and years about having cell towers erected next to their houses, and the industry has been saying ‘Oh, no, they won’t cook you, so it’s perfectly all right,’ but now they’re talking about putting transmitters on every lamp post… So, you won’t even be able to grumble and sell your house and move when a cell tower goes up next to it, because there will be cell towers everywhere,” she says.

And if the 5G rollout goes ahead as scheduled?

“Well, blow that for a joke. I don’t give my consent to being irradiated.”

This story originally ran on RNZ and is republished with permission