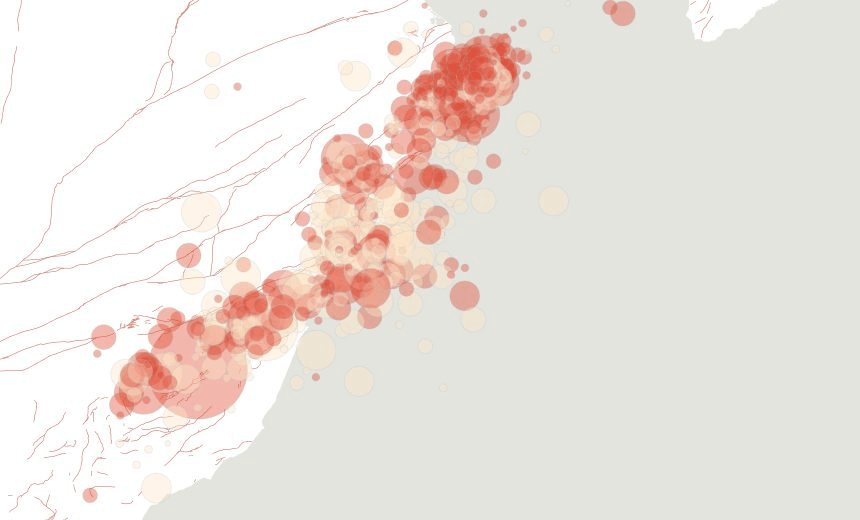 878 quakes in 24 hours: how New Zealand shook in the wake of the monster Kaikoura eqnz

By Chris McDowall
Contributing writer
Made possible by

Geonet recorded 878 events in the 24 hours after the monster 7.5-magnitude shock, more than 300 of them 4-magnitude or greater. Here Chris McDowall plots the quakes on an animated map.

This animation shows all the earthquake events recorded by GeoNet’s monitoring network between Palmerston North and Christchurch on Monday, November 14.

The big quake was 16km deep with a magnitude of 7.5 and struck at 12.02am. This was followed by hundreds of aftershocks. Including a cluster of three 6+ quakes in the first hour.

The dark lines on the map represent major faults.

Circles are coloured according to quake depth. The darkest circles occurred less than 20km from the surface. The palest circles represent events 60 km or deeper.

More on the Kaikoura quake and its aftermath …

‘There are more earthquakes to come’: NZ’s geology experts on what we know and the chances of another big one

Naomi Arnold: ‘I was scared as hell. I thought that was it, as the quake’s death rattle built and built and wouldn’t stop’

Five tips to help your child after an earthquake