Nearly 42,000 years ago, the Earth got flipped turned upside down. It caused total chaos. And it might happen again soon. Mirjam Guesgen explains.

Seemingly randomly throughout time, the Earth’s magnetic poles flip – magnetic north swaps places with the magnetic south. Up until now, scientists weren’t really sure what that meant for the planet’s environment or climate, or thought it had little effect. But a paper published today in the journal Science turns that idea on its head too.

According to the study’s authors, including researchers from the University of Auckland, University of Waikato, Landcare Research, NIWA and the Gondwana Tree-Ring Laboratory, the flip devastated the Earth’s atmosphere and depleted the ozone layer. They think those changes may have been behind the extinction of really large animals and Neanderthal humans, as well as the advent of human cave art and the first sunscreen.

And there’s speculation that another magnetic field flip is imminent.

The Earth has flip-flopped some 100 times that scientists know about. One of the most recent flips, the Laschamps Excursion, is thought to have occurred about 41,000 years ago but the exact date is sketchy.

This new Science study worked out a more precise date for the excursion using an ancient kauri tree from Ngāwhā in Northland that was alive at the time. “If you date things really accurately… suddenly it starts lining up with fairly major recorded changes,” says lead author on the study Alan Cooper.

Cooper explains that as the poles flip, the magnetic field shielding the Earth collapses. That lets in huge amounts of ionising radiation (think Chernobyl), which creates carbon-14 in the atmosphere. Trees suck up carbon dioxide from the air, which is “recorded in the wood”, he says. By looking at how much carbon is in the tree’s rings each year, Cooper and colleagues could work out when those carbon-14 levels peaked and therefore when the poles flipped.

This study estimated that the reversal was gearing up around 42,350 years ago and the ionisation peaked during the pole flip at around 41,800 years ago.

The study went one step further. Using those dates, the team of researchers simulated the global climate at the time using an atmospheric chemistry model.

That model didn’t paint a pretty picture. The Earth was bombarded with galactic cosmic rays, causing the ozone layer to wither away. Without the protective ozone layer, heat became concentrated in different layers of the atmosphere, warming the planet in some places and bringing freezing blasts of cold air and wind to others. 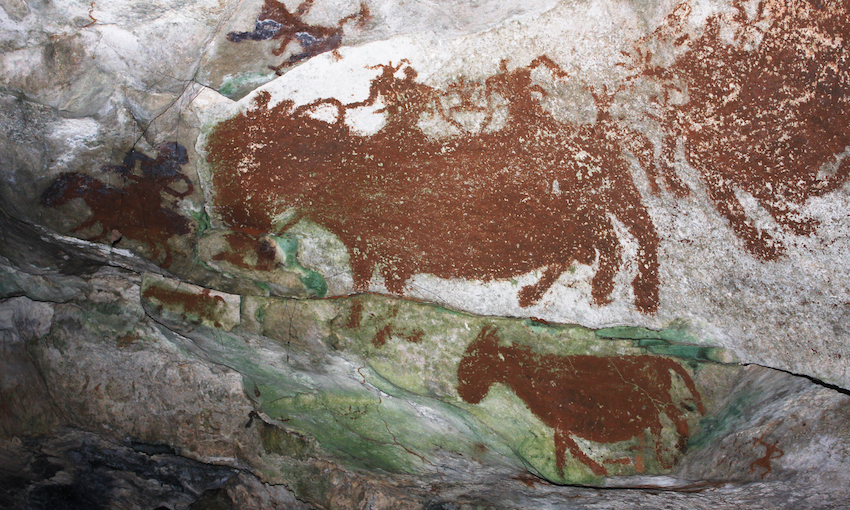 Ancient humans may have taken to caves to shield themselves from incoming UV rays (Photo: Getty Images)

They think the Arctic may have been hit with one of those cold blasts, growing the ice sheets, which in turn amplified the cooling further by reflecting light and heat away. And that may have been a trigger for an Earth-wide cold snap.

On the plus side, all those changes to the magnetic field may have made for some stunning auroras all over the world – making nights almost as bright as day at some times.

The researchers think those drastic shifts in climate could explain other big events that all happened around 42,000 years ago, such as the extinction of megafauna (really big animals) and Neanderthals. Previously, scientists had put these extinctions down to hunting by indigenous peoples or competition with other humans.

Climactic changes brought on by the Earth flip might even explain seemingly unrelated events like the advent of cave art. Ancient humans may have taken to caves to shield themselves from incoming UV rays or they may have developed one of the first sunscreens from red ochre.

“The climate goes AWOL and it has real impacts all over the world,” says Cooper. The team have dubbed this massive socio-environmental event The Adam’s Event, after Hitchhiker’s Guide to the Galaxy’s reference to the number 42. “What’s going to be really interesting is if scientists start looking at what else is there to see at 42.”

But not everyone is convinced there’s enough evidence to link everything – the mass extinctions, a burst of cave art and sunscreen – to the Laschamps Excursion. “It’s a neat study but there’s a lot of coincidence and a computer model,” says University of Otago paleomagnetist Christian Ohneiser.

Ohneiser, who wasn’t involved in the study, points out that some of the examples the study cites of what happened during The Adam’s Event also happened at other, non-flipped times. For example, the large growth of some of New Zealand’s glaciers, which the paper attributes to cooler temperatures, happened both before and after the flip too.

He says the methods for finding the date of the excursion are sound but that drawing conclusions about The Adam’s Event based on a climate model is a bit of a stretch. “Models provide insight and they help you understand processes, but a lot of what they’ve done here hangs off a model.”

The Science study is not the first time scientists have suggested that the Laschamps Excursion was behind major changes in biology and behaviour. And it may not be the last big flip event either. The magnetic north pole has been tracked wandering closer to Siberia. Ohneiser at least is not too concerned. “If you look at the fossil record, animals and creatures [in the past] have survived all that.”