At the forefront of the race for a coronavirus vaccine are researchers at Oxford University, who are working ‘with great care and due haste’. Six months ago, several hundred volunteers began participation in a clinical trial of the vaccine. Among them was UK-based NZ journalist Richard Adams.

I can’t talk now, I told the caller, because I’m about to go into a hospital. Since it was April 2020, telling anyone that you were at a hospital required more explanation than usual, so I told him: I was about to be injected with the new Covid-19 vaccine being developed by Oxford University.

Oxford’s vaccine trial had started four days earlier, when the first two human subjects were injected and filmed and broadcast across the world. Two days later, two more were injected. And two days after that, there was me, lost in the carpark of the Churchill hospital.

“You’re very brave,” my caller said. But up until then, bravery had nothing to do with it. To be honest, I signed up more in fear of boredom than anything else.

The Oxford vaccine trial launched with little publicity, because it began so early, at the height of international panic but before the reality of the long and debilitating nature of the Sars-CoV-2 virus had emerged. I only heard about the vaccine trial through my colleague, Hannah Devlin, the Guardian’s science correspondent.

For anyone who lives in Oxford and is feeling brave: the first UK vaccine trial is now recruiting, expected to begin within weeks https://t.co/JYFMSs88Ik

“For anyone who lives in Oxford and is feeling brave: the first UK vaccine trial is now recruiting,” she tweeted on March 27. Lockdown in the UK had begun the week before. All but essential staff were working from home. Schools and universities had emptied, conferences and exams were cancelled, meaning that, as the Guardian’s education editor, I (temporarily) had not much to do.

So I followed the link on Hannah’s tweet, expecting a grand scheme. But this was very local: volunteers had to live near Oxford, be aged between 18 and 55, and healthy. And not have had Covid-19. So I filled in an online form with the usual stuff. Medical history. Allergies. Contact details. No, I’d never taken part in a paid medical trial before – wait, we get paid?

“Volunteers will be required to make multiple visits over several months and must commit to remaining in Oxford for that time …” Well, I wasn’t going anywhere, and neither was anyone else. The railway line to London runs close to my house, and entire inter-city trains – normally carrying hundreds of commuters at rush hour – were going by with hardly a soul on board.

But then things moved quickly: the next day an email invited me to a screening. When was I available? I looked at an empty calendar and replied: anytime. An hour later another email arrived telling me to come the next day, for two and a half hours. And in another sign of seriousness, there would be free carparking, an unheard of event in Oxford. Help protect the world from a health crisis, and get free parking, too. Photo: Richard Adams.

By this point in April, the centre of Oxford was deserted. The students and tourists had gone, the hotels, museums, colleges and restaurants all closed. Without any traffic the drive across the city took just minutes, meaning I arrived very early. The carparks were all but empty anyway, Oxford’s hospitals having cancelled appointments and barred visitors. Ambulances were the only things on the road, and the few people around were fully gowned and visored.

But not at the the Centre for Clinical Vaccinology and Tropical Medicine, where screening was to take place. Outside were some nervous young interns with lists of names. No masks or gowns for them, or us, or even hand sanitiser, unsurprising given the severe national shortage in England at the time.

I was given a sticker with the number 5 on it and taken to see a socially distanced video of Adrian Hill, the director of Oxford’s Jenner Institute, explaining what was happening. There were then legal documents to be signed disclaiming any liability on the part of the University of Oxford for eternity, and a form for bank details. So we did get paid. 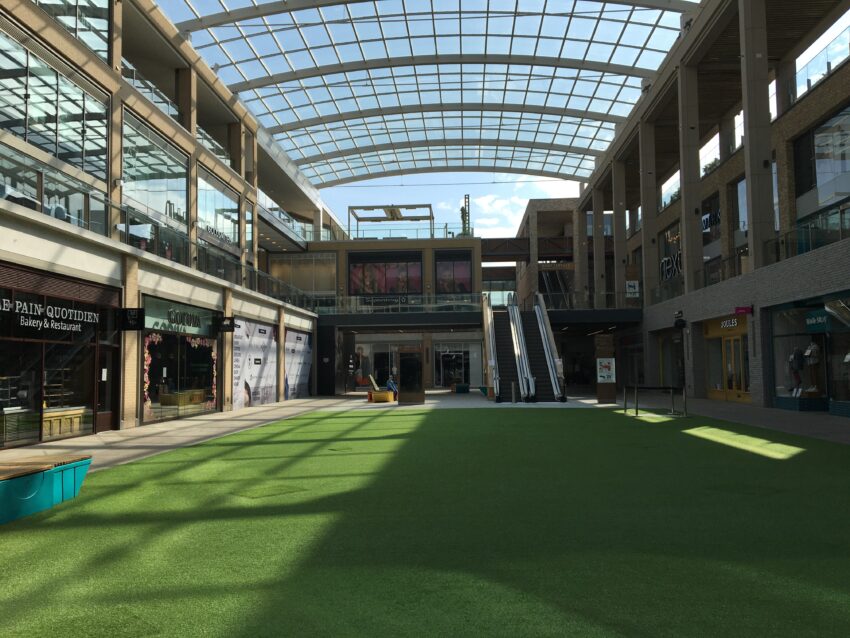 Then there were interviews, physical examinations, tests and more tests, including blood tests, the first of many, increasingly painfully. But I didn’t know that then, thankfully. That day around 700 people in the UK died from Covid-related causes.

Some phone calls followed with questions – I’d been to Italy in February, where had I gone exactly? – and finally another email inviting me to be vaccinated, on Day 0 in group one of phase one of the trial.

Perhaps because things had moved so quickly I hadn’t really thought about the dangers until that carpark phone call on Day 0. It was a university vice-chancellor. “You’re very brave,” he said, “I couldn’t do it.” I laughed it off, saying that after all the things I’d written about the University of Oxford it only seemed fair they should have a shot at killing me. But for the first time I felt properly nervous. Adrian Hill had explained that because this was the first human trial, and the usual testing had been sped-up, there could be unexpected side-effects. And in some earlier cases, animals injected with experimental Sars vaccines had more severe symptoms when they were later infected than those that hadn’t been vaccinated.

I remembered that I’d posted a link to the trial sign-up on the local parents WhatsApp group, which was full of eager messages from parents wanting to support the NHS. No one replied.

But this was a randomised controlled trail – meaning that 50% of the volunteers would receive the officially titled ChAdOx1 nCoV-19 vaccine, the other half would get an unrelated meningitis vaccine, and no one would know who got which until the trial ends in six months. And Sarah Gilbert, Oxford’s professor of vaccinology, had told journalists she was 80% confident of success. So I figured that a 50% chance of an 80% chance was pretty good odds.

Now the interns were gone, replaced by security guards outside the clinic. Inside I glimpsed Professor Gilbert, who’d been in the media since the first injections four days earlier. A doctor took me off for more tests. “Your blood pressure is very high,” she said. I admitted being nervous. Don’t worry, she said, they’ve injected five chimpanzees with the vaccine and four of them are fine.

Despite the high blood pressure, finding my veins proved difficult until a passing paediatrician helped me fill up the six vials of blood required. Meanwhile nurses cursed the flimsy aprons they had to wear, which ripped too easily. “There are meant for hairdressers,” one said in disgust.

Then after more blood came the vaccine itself, which looked and felt like a flu jab. I was ushered off to an observation room for an hour, “just in case”. Then more tests, and another zip home through the empty streets. I felt fine but tired, I told the follow-up phone call that evening, and started filling in a web diary every day for a month to come. 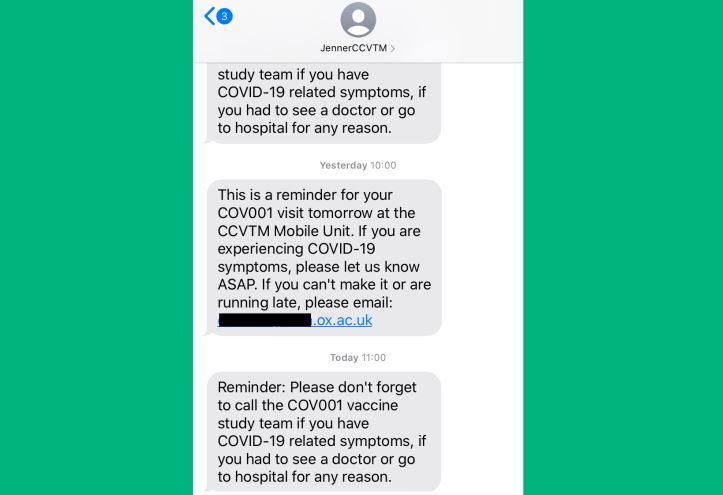 The next day I felt very tired indeed but there was none of the swelling or redness at the injection site that we had been warned to watch for, and by day three when I returned for more tests, everything seemed back to normal.

Except for my veins, which refused to give up their blood without a struggle. The same happened again on day seven and day 14, by which point my arms had seen more needles in three weeks than the rest of my life put together. One nurse said my vein went flat as soon as the needle went in, so nothing came out. Another doctor said my vein jumped about, causing some very painful attempts to pin it down.

So I learned that some people are much better at taking blood than others. And I learned that before a blood test it helps to eat lots of food and drink lots of fluids – coffee is not so good but tea is fine. Also, I’d be a rubbish heroin addict.

Then things slowed down, the diary became a depressing weekly record of lockdown life. “How many times did you go to the pub/club/theatre this week?” – zero didn’t even come close to the truth. Every sore throat or runny nose in my household had to be recorded, followed by “outcome of illness”: recovered or died.

Each visit to the CCTVM saw it grow and become more professional. The flapping paper signs with directions were replaced with laminated logos. A vast mobile building was unfolded on one edge of the car park, and became the new centre for testing. The building was normally trucked around to music festivals like Glastonbury, a nurse told me, but they had all been cancelled. 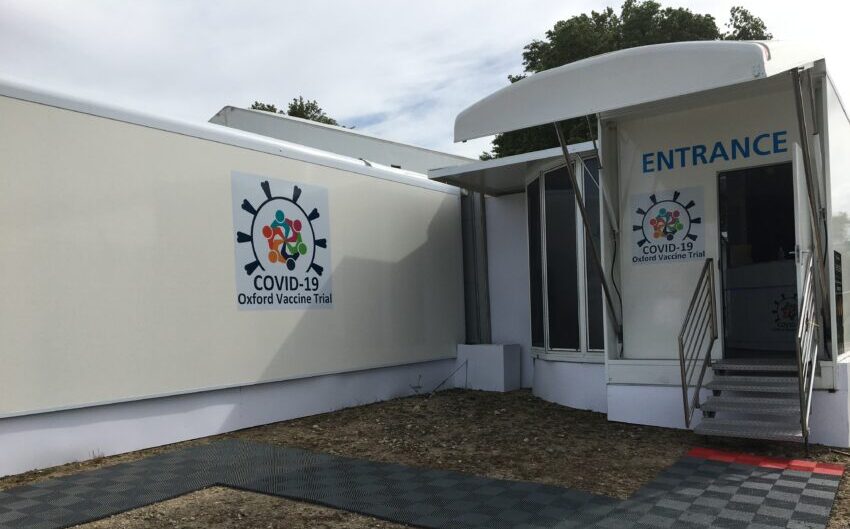 As summer passed, the trial expanded from Oxford to other cities and countries. People like Boris Johnson have buoyantly talked up its chances. The US government bought hundreds of millions of doses in advance. Newspapers wrote articles about “the race for the vaccine” as if it was an inevitable success.

Those articles were usually illustrated by scientists in gleaming labs, and maybe there were some, but from outside it wasn’t obvious. The Jenner Institute building itself is modern. But around it on the sprawling hospital campus are derelict buildings, smashed glass, collapsing roofs, broken furniture. The staff carpark is dirt and gravel, dusty in summer and muddy the other three seasons. The hopes of the world and billions of dollars might be resting on it, but within sight of the centre are abandoned offices with blinds poking out of broken windows – another side of the UK’s  health system exposed by this pandemic.

Soon I’ll be making a final visit for the Day 182 tests, when the trial ends. It doesn’t seem like six months have passed since Day 0. Maybe that’s because as I write this, Oxfordshire has recorded 100 new infections in a day, Oxford’s hospitals seen their first Covid-related death since mid-summer, and most of the UK and Europe are being locked down again. I still don’t feel brave.