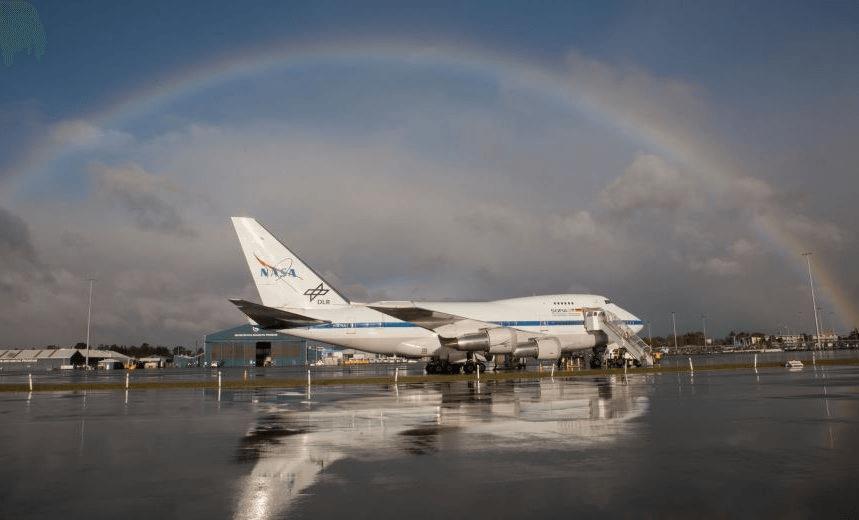 No ordinary star-gazing: my ride aboard the Stratospheric Observatory

When astrophysicist Jordan Alexander was given the chance to travel on the Stratospheric Observatory For Infrared Astronomy, he leapt at it.

It was as if I’d become trapped in a cold, noisy, enormous, and super hi-tech elevator, filled with row upon row of technical equipment – including a telescope. The elevator was a 747 aircraft, converted into a flying astronomical observatory, and I was on-board for a 10-hour adventure together with 30 experts from all walks of life.

No ordinary long-haul flight, this was SOFIA, the Stratospheric Observatory For Infrared Astronomy. An observatory built into a wide-bodied jumbo jet, its showpiece is a 2.5-metre-diameter optical telescope that peers through the veils of interstellar dust, which block visible light, to discover what lies hidden out there.

SOFIA, a partnership between Nasa and the German Aerospace Centre, studies cosmic objects, including asteroids in our solar system, nearby planetary systems similar to our own, supernovae, our galactic center, and extragalactic objects with massive black holes. While in New Zealand this winter, it is the largest optical telescope in the country; the next largest being the 1.8 meter telescope at the Mount John Observatory located by Lake Tekapo, South Island.

I had leapt at the chance to join the flight as a guest of the US embassy. Our flightpath took us within 1000km of the Antarctic ice shelf near Oates Bank, Buell Penninsula and the Anare Mountains. We came within 300km of the Antarctic Circle, that region where the sun never sets in summer, nor rises in winter.

The mission began with a briefing at the US National Science Foundation Antarctic Program Base in Christchurch. We underwent three hours of welcoming, flight over-viewing, safety training and mission briefing, before we finally boarded SOFIA’s 747 jet which lifted off in the early evening.

I was struck by just how carefully choreographed the flight and science crews amid a frantic 10 hours. They were constantly moving, constantly collaborating, analysing data in real-time, making decisions on-the-fly, all focused on their particular tasks yet all collaborating to maximize detections of cosmic emissions from molecules, atoms and ions. This includes carbon and oxygen and excited multi-atom molecules including carbon monoxide.

It has been said that “God made beer because he loves us and wants us to be happy”.  Well, it turns out that those working in infrared astronomy, like SOFIA scientists, have discovered many of the chemical ingredients of beer in space, including massive quantities of the nine-atom molecule ethanol. Another curious find is Buckminsterfullerenes, one of the largest molecules discovered in space, containing 60 atoms and shaped like a soccer ball (only a billionth of a metre in size).

The conversations with the other guests on board, including the American ambassador and the transport minister Simon Bridges, were riveting. One was Alexia Hilbertidou, a sharp 18-year-old who founded GirlBoss – “to inspire New Zealand girls to become change makers of the future through STEM (Science, Technology, Engineering, and Mathematics) fields.”

She is a rising star, who inspires any crowd lucky-enough to hear her call for gender-challenging transformations in science within New Zealand society.

Shouting above the roar of the minimally insulated SOFIA jet, Chris Duggan, founder of House of Science, shared with me how she brings hands-on scientific explorations to New Zealand secondary schools. She accomplishes this through the development and distribution of science kit for young people to facilitate their exploration through direct engagement.

Dr Peter Crabtree’s background in the history, philosophy and psychology of science is the kind of intellect one rarely comes across in the world of practicing scientists. It is easy to find ourselves overly focused on meeting quotas called for by PBRF (NZ Performance Base Research Funding), where fabulously clever people attempt to engineer, commodify, corporatise, and optimise science.

To me, that is not, however, the essence of science. Science is about curiosity driven by novelty, breaking with convention, and asking questions like, “but how could it possibly be that way!?” No pioneer ever progressed by adhering unerringly to the rules; science progresses by those who break rules. Once something comes to be understood in some novel way that helps people see connections between ideas/objects/processes that were not recognized before, it then ceases to be science. Instead, such a breakthrough often moves into the realm of engineering, where great things are then engineered. Examples of this include modern electronics based on semi-conductor technology.

The end, however, is now in sight for this technology, and a new frontier is opening called quantum computing, which leverages the very failures of this aging technology as it attempts to engineer ever smaller transistors (logic gates) with increasing problems..

My own study explores the physics of giant (Rydberg) atoms in the cosmos, where the average density of matter between stars is a spacious 1 atom per cubic centimeter. We at AUT’s Institute for Radio Astronomy and Space Research have collected and analyzed spectroscopic data from the great nebula in Orion using AUT’s radio telescopes in Warkworth and the Australia Telescope Compact Array. Our findings have solved a puzzle in the field of radio recombination lines published by a Canadian astrophysics group nearly two decades ago.

Our findings also inform the rapidly expanding field of quantum computing, where groups of laser-manipulated Rydberg atoms are now being finessed into logic gates, the bedrock of modern computers. Such solutions will revolutionize, for example, how we build next-generation transportation systems, hunt for planets and life on other planets, and simulate life and intelligence as we know it and as we can imagine it.

About eight hours into the SOFIA flight, the flight crew suddenly told us to return to our seats and buckle-up. There was growing concern by the pilots that the weather conditions around Christchurch, were deteriorating and they were considering re-routing to Auckland.

I got chatting with Simon Bridges, as we huddled in that cold and noisy scientific steel tube travelling at 80 per cent the speed of sound. He began by asking me where I was from. Henderson Valley, West Auckland, I said. He chuckled – he is originally from West Auckland and my accent is a dead giveaway that I am not exactly a born Westie.

We shared how our childhoods were both spent exploring the bush, he in the wild West Coast of the Waitakare Ranges, at Bethels, Piha and KareKare and me at 9,000ft in the high mountain desert of the Sangre de Cristos of Northern New Mexico, near the town of Taos, named after the local Taos Pueblo Indians-part of the Southern Rocky Mountains in the United States.

We talked about religion: we were alike in feeling a spiritual dimension – though not in the sense of organised religion, in my case. The more I explore the cosmos scientifically, I told him, the more I wonder, “but how can it possibly be that way!?”, “how did we even get here”, and “where is everybody else”?

We landed at 4am into a deep fog. Shuffling, bleary eyed but imbued with wonder, like coming out of night club into the dawn, we took our final pictures of the magnificent aircraft and made our way off the NSF Antarctic Program Base onto Orchard Street, as if we had fallen out of space.

Jordan Alexander is lecturer in Physics and Astronomy at AUT