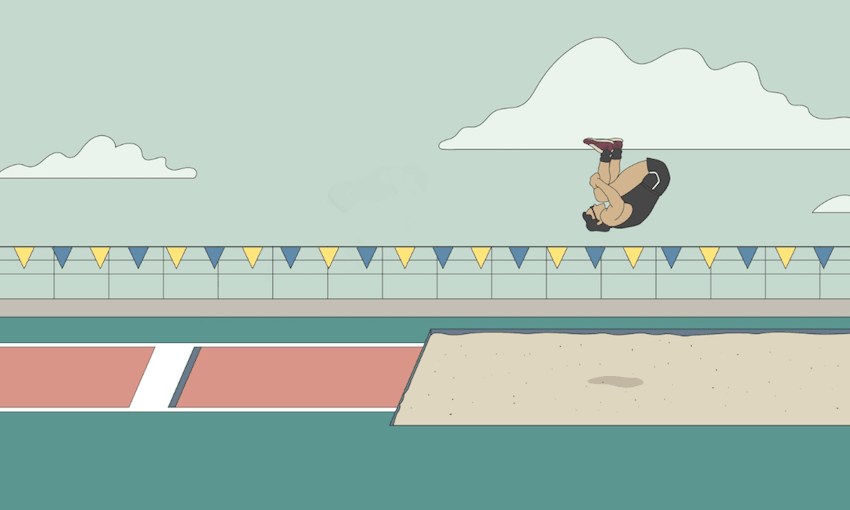 Bring back the Delamere flip

Tuariki Delamere’s sensational long jump technique could have been a game changer, writes track and field historian Grant Birkinshaw. He’s calling for the ban to be revoked.

At a college track and field championships meet in 1974, a New Zealand long jumper representing Washington State University did something that had never been done with any sort of success in competition before – a somersault. As explored in a recent episode of Scratched, it was one of the few times the technique was used in competition before being officially banned in the sport, and because the long jumper – Tuariki Delamere – didn’t land it, the jump wasn’t counted.

Running and jumping were a “contest” of life or death between the hunter and hunted in the early Pleistocene era, around two million years ago.

Footprints found by paleoanthropologists at Ileret in Kenya have been able to calculate that homo erectus were about 1.6m tall, weighed around 53kg and had a top speed of 6.5 metres per second. That’s very fast considering today’s top athletes are lucky to travel at 10 metres per second. With that speed and inherent strength, it’s estimated they could easily jump over a five metre stream or ditch, out of fear of being chased, or in pursuit of game.

The long jump was a feature event at the ancient Greek Olympics from 776-550 BC. The ancient Olympics were a highly spiritual occasion to pay homage to the god of all gods, Zeus. The Greeks carried 1.5-2kg stones called “halteres”. The jump commenced from a standing or two-step approach. The halteres were thrust upwards to give added mass forwards, then greater momentum was added when the stones were jettisoned behind them. There are no accurate records of distances achieved. The Greeks’ use of halteres had a similar centre of mass advantages to the Delamere flip.

Greek soldiers were also taught to long jump to enable them to leap across ditches and trenches during warfare.

In recorded history, there have only been three main long jump techniques over the past 2,800 years.

All of the above techniques add little distance to the jump once the athlete has taken off. It has been calculated by physicists such as Dr Jim Hay and Geoff Dyson that the flip would add between 10% and 15% to an athlete’s performance. In theory, an 8 metre long jumper would be capable of exceeding the current world record with a 9.12 metre performance.

Not only does it look sensational, it works. The physics are conducive as the rotational forces are harnessed by the athlete, instead of having to be counteracted.

Interestingly, there is another New Zealand connection. Dr Jim Hay was born in Waipukurau and gained his PhD from the University of Iowa in 1965. Dr Hay was to become a world-renowned scholar in biomechanics, particularly in track and field. He authored 144 published papers, and authored or edited 10 books.

The history of the flip

As with any innovation, the recognition goes to the person to bring it to world attention. Debbie Brill of Canada did a high jump “flop”, but it was Dick Fosbury who captured the world’s attention and so it is named the Fosbury Flop.

French, American and German athletes have tried to claim the “flip” as their innovation, but no one can remember their names.

Tom Ecker, the renowned American coach and author, stated that during the summer of 1970 when he was writing his book, Track and Field Dynamics, it suddenly occurred to him that a somersault would have great advantage in overcoming the forward rotational forces that a long jumper experienced. Excitedly, he took his discovery to athletes in Iceland, Sweden and Denmark, where he was advising their Olympic teams.

Ecker’s version was a somersault with an aerial twist on the descent, so that the athlete landed on their feet, facing back towards the direction they had taken off from. No wonder it didn’t take off. This is where theory versus reality breaks down. As Tom Tellez, the great coach of Carl Lewis, said: “Scientists and coaches don’t invent the best techniques; great athletes discover them.”

During June 1973, Keith Clements, a long jumper from the University of Illinois, suggested to Dave Neilson, a gymnast and pole vaulter, that he should incorporate a somersault into the long jump. Neilson did so as, being gymnastically trained, it was an easy transition. The Illinois track coach mentioned this to Tom Ecker who came and videoed Neilson, thus cementing Ecker’s claim on his “discovery”. However, Nielsen’s technique was closer to Delamere’s than Ecker’s. Neilson didn’t progress past the practice field, and only managed a modest 6.85 metres with it.

Delamere had heard of the Scandinavian experiment, so tried it. With limited practice, his version was achieved in full view of the world’s media at one of the most prestigious events in the United States – the Los Angeles Pacific Eight Conference in the Los Angeles Coliseum, venue of the 1932 Olympics. The commentator at the event, who was speechless probably for the first time, was none other than OJ Simpson.

A video of Delamere’s somersault that was taken at the University of California Los Angeles isn’t without a little intrigue. It was reputedly filmed by Russian agents at UCLA stadium where Delamere was practising. The Russians had secretly been experimenting with the technique with view to surprising the world at the 1976 Olympics in Montreal, Canada. They abandoned their plans upon discovering that it was a technique known to the western world.

Following Delamere’s performance at the Los Angeles Pacific Eight Conference, the International Association of Athletics Federations banned the technique within a matter of months. They considered it dangerous, yet without any evidence. Others believed it was banned because it simply didn’t look like a long jump.

Since seeing the Scratched video, track and field fans from around the world have become excited about it, and experts have written extolling its potential.

The goal of fans of the Delamere flip now is to have the 46-year-old World Athletics Rule 185-30.1.3 banning the technique revoked. It will liven up the spectacle and the event, and hopefully lead to greater performances. It will need an element of gymnastic coaching on rubber mats until perfected. After all, gymnasts have been doing somersaults for years. The test of the technical advantages will be in the doing. Not all athletes will adapt to it, nor should everyone. That’s OK, but at least they should be given the chance to experiment with the technique.