Along with New Zealand and a handful of other places across Asia-Pacific, Taiwan was until recently seen as a paragon of Covid preparedness. Now a community outbreak is spreading across the island – just as a squabble over the supply of vaccine erupts, writes New Zealander Ron Hanson from Taipei.


It was the world’s most stringent Covid defence. Despite being located a metaphorical stone’s throw away from the original epicentre, with frequent direct flights to Wuhan at the time of the pandemic’s outset, Taiwan had made it almost a year and a half with the barest of social restrictions and only a handful of deaths. The economy was booming and the international press coverage was glowing.

Now, suddenly, Taiwan is engulfed in an island-wide outbreak as its government and people are put to the test. So what went wrong and what are the lessons for New Zealand in Taiwan’s mistakes?

Within Taiwan’s success lay the seeds of its undoing. While the world grappled with Covid-19, Taiwan had so effectively kept out the virus that, like New Zealand, its people were already enjoying a post-pandemic lifestyle. Concerts were packed, bars were brimming with patrons and crowds thronged at Taiwan’s legendary religious festivals. But the trouble was that the pandemic hadn’t ended. When the border was finally breached, the virus found fresh virgin territory and a population that had let down its guard. Taiwan had kept up vigilance for so long, but sure enough, complacency had crept in. The facts of the border failure are becoming well known. The Novetol airport hotel, where China Airlines pilots and aircrew quarantine, had broken the rules by housing quarantining pilots, flight crew and domestic tourists in the same building. Crucially, on April 15, Taiwan relaxed its quarantine rules for unvaccinated pilots and aircrew. The quarantine period was reduced from five to three days.

Almost like clockwork, by the end of April we were reading reports of an alarming number of pilots who were testing positive for the highly infectious UK variant after they had finished quarantine. And then we started to learn of the locations they had visited. When we learned in early May that a Covid-positive pilot and flight attendant had broken the rules of their self-health monitoring period by visiting a sports bar, we knew we might have some trouble on our hands. Mask-wearing had been mandated in most public indoor settings, but the places where people didn’t wear masks were restaurants, night clubs, and bars. Naturally one can’t wear a mask while they eat and drink. And then the virus made it into the hostess clubs of Wanhua, Taipei’s oldest district. Euphemistically known as “tea houses” or colloquially as “grandpa shops”, these are establishments where middle-aged women serve a typically older clientele. The degree to which these businesses provide sexual services reportedly varies. Regardless, one can be sure that not a lot of social distancing was going on. And critically, patrons of these establishments are reluctant to co-operate with the authorities. Contact tracers are dealing with a list of people who have tested positive but left false contact details.

And then there is the issue of vaccines. Due to its geopolitical situation and the ongoing vaccine crunch, Taiwan has struggled to obtain the vaccines it needs. In February, health minister and director of the Central Epidemic Command Centre Chen Shih-Chung alleged that Taiwan’s deal with BioNTech, the company that partnered with Pfizer to produce the vaccine currently being rolled out in New Zealand, had been scuttled due to political pressure. According to Chen, this was after the contract had been finalised and Taiwan had already signed. Following Chen’s allegation, BioNTech quickly issued a statement saying that it was committed to providing Taiwan with the vaccine, but no deal has materialised. Last week, president Tsai Ing-Wen directly accused Beijing of interfering in Taiwan’s vaccine purchases. Beijing, of course, denies the claim. It offers to help by providing Taiwan with free Chinese-made vaccines, while simultaneously bombarding the island with fake news and disinformation in what local experts are referring to as a “pressure test”. Fosun Pharma, the Shanghai-based company that distributes BioNTech to the greater China region, recently said it is willing to supply “Taiwan compatriots” with the vaccine. But Taiwan insists on dealing directly with BioNTech, citing safety, political and legal risks.

Prior to the outbreak only around 300,000 doses of AstraZeneca had been obtained. And after the steady stream of scare stories in the media about AZ, and with other governments suspending its use, people here were reluctant to take it. Taiwan was safe. Why not wait for a different vaccine to arrive, or Taiwan’s own vaccine candidates to come to fruition?

Taiwan didn’t have enough doses to protect its frontline workers, and what little was here was in danger of expiring. With the recent outbreak, vaccine hesitancy has been dealt a decisive blow. But the failure to use those initial shipments in a timely fashion looks foolish in retrospect. 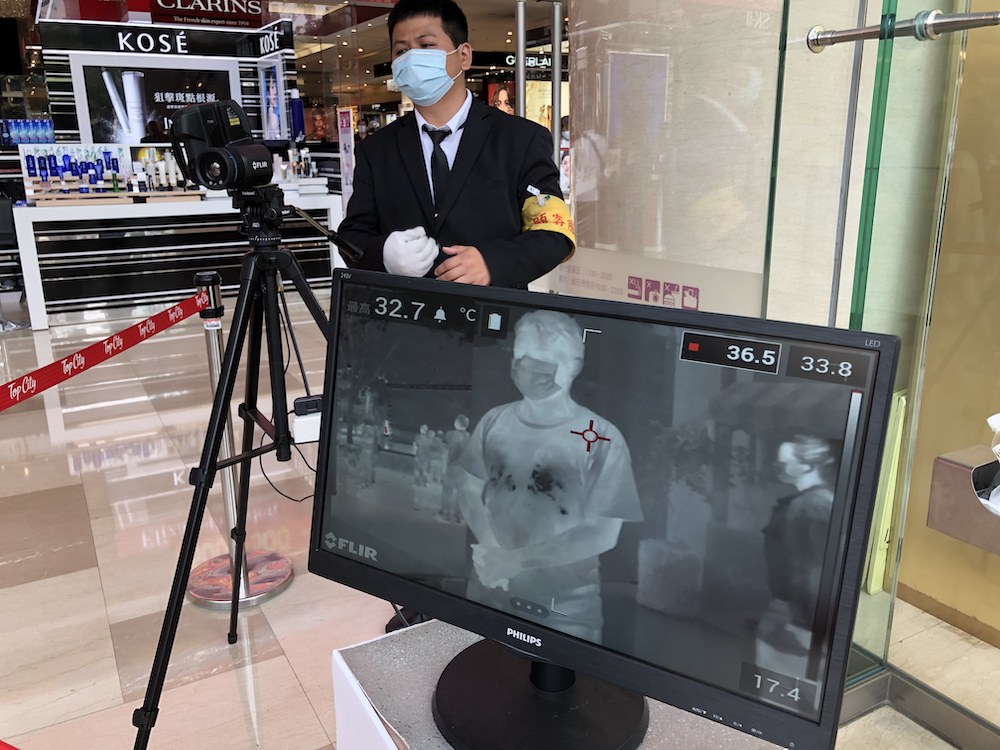 So here we are in the thick of it, a surreal phenomenon we’d seen unfold elsewhere through the media. In Taiwan, it feels like the pandemic has just begun. The government is now scrambling to increase its testing capacity. Given how diligently it prepared for this pandemic in the preceding years, it’s disappointing to see how little the government appears to have utilised the past year to prepare for this contingency. Taiwan was light years ahead of the game at the beginning of this pandemic, but now we’ve got some catching up to do.

Taiwan’s greatest asset, however, has always been its public. The citizen response has been phenomenal. After all the stereotypes of submissive obedience, it turns out that the public doesn’t need to be told what to do. In many ways this is a citizen-led response, with the Taiwanese people outpacing the government, keeping one step ahead. For example, Taipei recently banned indoor dining, but even before that many businesses were voluntarily closing or refusing to allow dining in. The restaurants were empty as people chose to order deliveries or take out. The government thus far appears unwilling to enter a full lockdown. What we’re seeing instead is being referred to as a “voluntary lockdown”.

The power of this shouldn’t be underestimated. At the beginning of the pandemic, Taiwan achieved elimination without a lockdown. This was despite there being 10 community cases with unknown origins. It was a phenomenal achievement that depended on the determination and ingenuity of the public. But now we’re dealing with a highly infectious new variant and widespread community transmission. Are we even pursuing elimination now? Or are we moving into a strategy of suppression and mitigation while we wait for vaccines? So as I write, the number of international Covid success stories has dwindled. What should New Zealanders take away from this? I hope it’s not a feeling of exceptionalism. Human folly is a universal experience and in the course of the pandemic it’s bound to rear its head. To be sure, New Zealand has huge advantages. Chief among them are low population density and an effective approach of snap lockdowns. It’s also had some luck.

Throughout the pandemic most pilots and air crew of international flights who are based in New Zealand have been completely exempt from quarantine. This is despite repeated warnings from epidemiologists and internal documents raising concerns by aircrew and staff about the risk the policy poses to colleagues and the public. As pilots and flight crews get vaccinated, the risk decreases but is still present. There is reportedly still a significant amount of vaccine hesitancy among these key workers.

If the Taiwan experience shows anything, it’s that there is a constant need to reassess the response, look for holes and weaknesses, and plan for contingencies. What happens if the current approach suddenly doesn’t work? I also hope New Zealanders can look to the Taiwanese public for inspiration. They are my heroes in the current moment.

And of course, get vaccinated as soon as possible.

This piece was originally written for the Asia Media Centre.

Amid all NZ’s Covid back-patting, let’s not forget the country that did it first