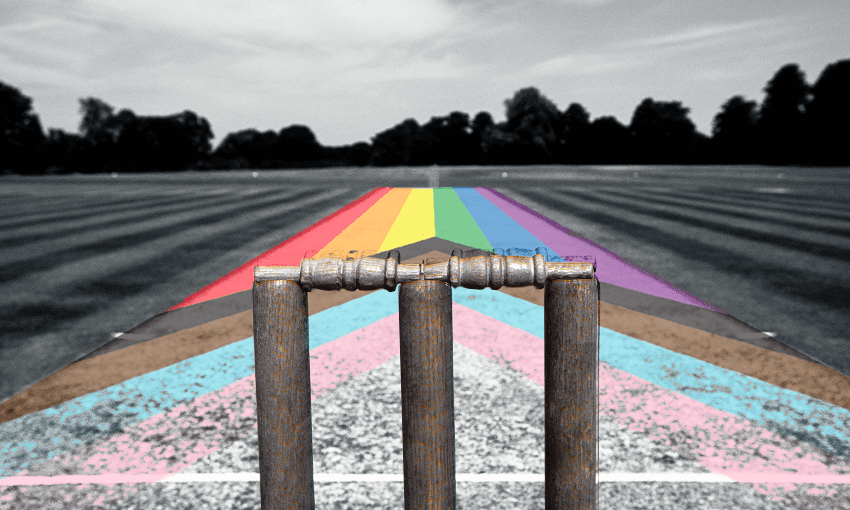 Many athletes are queer, but sporting bodies have much to learn when it comes to supporting them, writes Alice Soper.

Much is made of the hypothetical watershed moment in sport, where we get to point to our first out queer athlete in a big brand men’s team and consider the rainbow officially ticked. Then, and only then, will homophobia and transphobia be conquered and we will hoist the rainbow flag to flutter in the breeze of a new tomorrow. Today, former Black Cap Heath Davis did just that, an undeniably massive step for men’s sport in Aotearoa.

Long ago, however, that rainbow flag had been woven into the fabric of another part of our sporting community. Queer wāhine athletes have been so normalised across so many codes that it’s not unusual to see partners and wives end up playing alongside each other.

Shaylee Tipiwai and Te Maari MacGregor are one such couple. The two met while playing rugby at high school and then went on to play provincially together for the Hawke’s Bay Tui.

“I was introduced to the rugby scene at high school when it was all female,” Tipiwai, 30, recalls. “And being in third form and playing in the only girls team at the school, there were already a number of gay people.” They soon became mates, and Tipiwai met MacGregor, who she’d eventually marry.

“I wouldn’t classify myself as a lesbian,” says MacGregor. “I’m just happy with who I’m with. But being around women who were just honest – with themselves, each other and who they were – made it easier to be free to be who you are and free to love who you love.”

From day one in their chosen sport, the rainbow was there. The sport shaped by the community that chose to play it. However, women’s sport in Aotearoa and around the globe is experiencing a moment of exponential growth. As the playing base evolves, the implicit inclusivity of women’s sports now reckons with how to hold on to those values.

Cat Myhill is pansexual and plays hockey in Wellington. She remembers chat about “a queer hockey club in Wellington and it had a few teams within it”. But until this year, Myhill has been, to her knowledge, the only “out” player in her teams.

For the most part though, that hasn’t had a negative effect on Myhill’s playing experience. “My only instance of ‘queer nerves’ was last year,” she remembers. “During a BYO one of the seniors went around the table and asked each player individually if they had a boyfriend.” Adding to the stress, Myhill happened to be sitting next to the person interrogating everyone which meant she was the very last person to be asked.

Myhill disclosed she had a girlfriend and thankfully nobody flinched. The senior player later apologised in private for having put her on the spot and they continued on with their evening. “Within all that though I do want to acknowledge that this could have gone down differently and it easily could have affected someone negatively.”

Research suggests that women in male-prevalent sports, regardless of their sexuality, are often assumed to be lesbians and experience discrimination as a result. There is often very little by way of written policy regarding rainbow athletes in sports environments which can lead to management making decisions for players without discussion.

“When we played together, if we travelled with the team they’d just put us together as roommates,” Tipiwai recalls. “But I didn’t actually want to room with my wife. It wasn’t about going away to spend time with each other, it was more about focusing on the team.”

MacGregor agreed. “I played in 2003 and there was like 10 years [of Hawke’s Bay provincial women’s rugby] before me, so they’ve had a lot of time to write something up.”

This lack of competency in supporting LGBTQIA+ athletes was something identified as part of the Black Ferns culture and environment review. Despite MacGregor describing rugby as “super gay, rainbow as”, the review found there to be “limited comfort and education around supporting rainbow players”.

Caitlin Eves is a cis woman who loves women and cricket. She played through the age grades in Christchurch and now sits on her local club committee as well as the Cricket Wellington female reference group. Despite being involved in the development of inclusion policies in her work in the public service, this isn’t a conversation she has brought into her chosen sport.

Eves is the perfect champion for such a cause, with experience in establishing a queer sport space. While living in Canada, she joined a rainbow dodgeball league and brought this sport, along with its inclusive practices, back with her to Wellington.

“I need to give credit to the Canada league because I stole some stuff from them and then changed it to make it more kiwi.” Eves confesses. “I used that and I also was very intentional at the start of each season in actually talking to everybody and saying up front that this is an inclusive space.”

More support would be required from the sport’s governing body, were Eves to take up the cause and see these principles incorporated into the local cricket community. Without leadership at the top, Eve’s believes it would be hard for any initiatives to gain traction.

“It shouldn’t be on me just because I’m the lone woman or the lone queer person happy to fight for the queer people on the committee,” Eves says. ”The amount of times I have to fight for things and explain why what they’re doing isn’t quite right for the woman’s side of the club. That’s already a lot of energy.”

Now is the time though, with change coming locally on the back of new domestic requirements for women’s cricket. Clubs will need to meet certain targets around the number of women on the board to qualify as Premier and Eves sees this as an opportunity to take further steps with the addition of other diversity requirements.

Queer athletes have stepped out and now they need their sports to step up. The collective wish is to see their governing bodies frontfoot more of these conversations and initiatives. Like all those that love sport, these athletes understand the importance of leaving the jersey better than you found it. For them, that means ensuring that all athletes feel safe to play the sports they love.

“It’s been great being under the radar… what would bringing attention to us mean?” MacGregor asks. “It will be a positive attention but then there’s always going to be that negative side and that’s where I worry, not for myself but others. I just have to make sure everyone is safe.”

So before any rainbow rounds or jerseys, before any ambassadors are appointed, before any plans are put in place, sports need to do what a number of its rainbow athletes have already done. Understand itself and whether or not it is safe yet to come out.