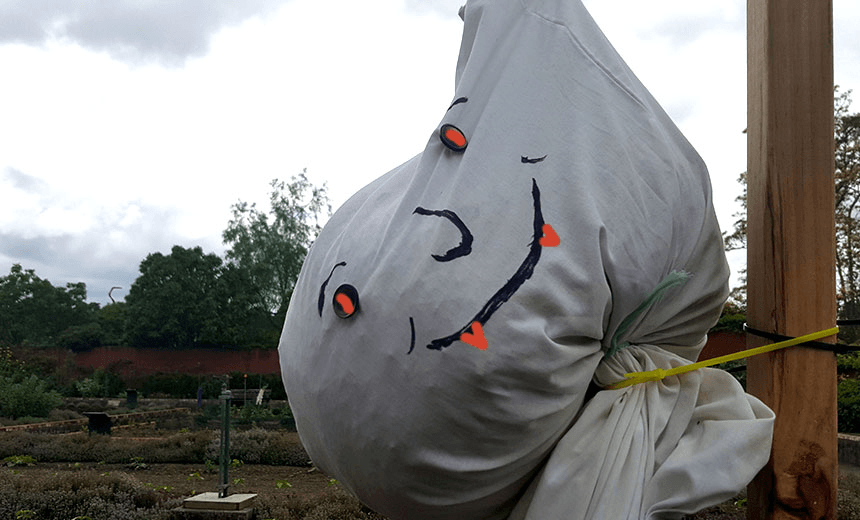 The Spinoff reviews New Zealand #48: the scarecrows of Hamilton Gardens

We review the entire country and culture of New Zealand, one thing at a time. Today, José Barbosa suffers pure horror in the form of Hamilton Gardens’ trauma-inducing scarecrows.

Hamilton gets ribbed a lot, but the city has at least two things going for it: 1) the mighty Waikato River (why was the city built looking away from the river?) and 2) the glorious Hamilton Gardens.

Built on the site of what used to be a landfill, the Gardens are an oasis. Appropriately enough, the Gardens are a series of themed gardens such as the Tudor Garden, the Italian Renaissance Garden and Te Parapara, apparently New Zealand’s only traditional Māori productive garden.

It was during a recent peaceful constitutional through the ‘Kitchen Garden’ that the serenity of the place was shattered by a collection of scarecrows. I was unnerved and even distressed by the grisly parade of nightmares and felt a need to warn others.

Sure Mr Twigs seems like a chill guy, he has the air of a friendly east coast biodynamic farmer, but FFS the guy has twigs for hands. Also look at his vacant stare. The look in his eyes says “some truckers chopped off my hands and jammed sticks in the bleeding stumps and now I travel the earth dropping bits of twigs everywhere and unable to operate Sodastreams.” Horrific.

Legacy mediums always give me the shits, but that is a lot of CDs without covers. I’m white with fear.

Sure, looks innocent enough, but as has recently been discovered, Thomas the Tank Engine was really propaganda for emotional and political conformity. Currently weeping for our children’s minds.

This is exactly how I imagine my face to look when when the sun explodes.

It’s the engorged pelvic area and it’s the mysterious head hiding behind the cardboard Batman mask. But mostly it’s the posture suggesting this b-boy is about to pop the robot on your ass.

This stayed with me for a long time.

Verdict: A ongoing gallery of nightmares. Escape is only possible via spiritual and physical death.

Good or bad: OK, real talk: the annual Scarecrow Festival at the Gardens is really cool and kids from local schools make some awesome ‘crows. It’s just that some are a bit scary for a 38 year old digital media content creator, OK? Definitely good.