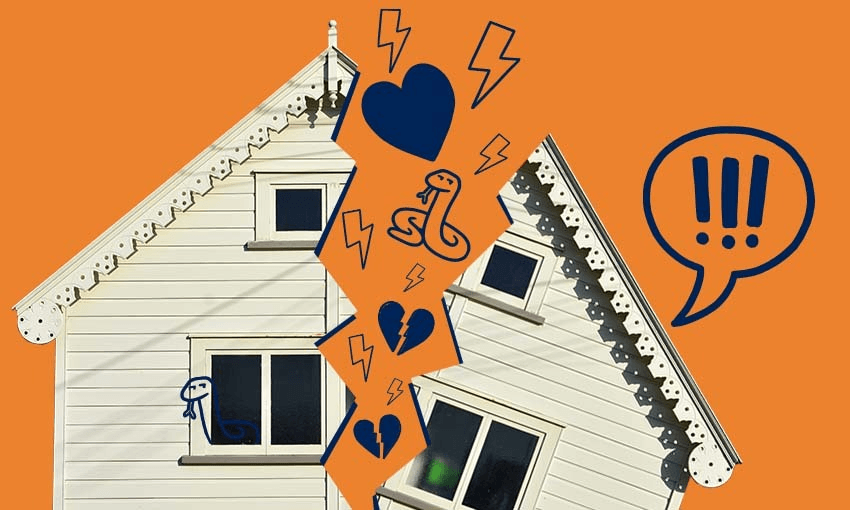 The psychology of locking down with your flatmates

What does spending over three months with the same group of random people do to a person? Naomii Seah investigates.

It’s been 107 days since the beginning of Auckland’s lockdown.

For a lot of people, that means 107 days working from home, 107 days spent mostly inside, and 107 days with the same people. Given all that time spent with others, many are finding their relationships changing – for better or worse.

“Disasters can act as a relationship accelerator,” says Dr Jessica Maxwell, a lecturer in social psychology at the University of Auckland.

Maxwell focuses on intimate-partner relationships, but notes that much of her research also applies to close relationships in general, like flatmates who’ve spent more than three months in lockdown together. “Some people might be headed for issues faster, but the opposite is happening as well… [the pandemic] really has been able to bring people closer together.”

That was true for Sarah and Logan*, who perhaps got a bit too close over lockdown. Sarah tells me they’d “always been closer” than their other flatmates, but she’d chalked it up to “banter”. During this most recent lockdown, Sarah and Logan spent increasing amounts of time together, watching movies and making dinners. They ended up sleeping together around two months in.

And they’re not alone, according to Maxwell, who says flatmates sleeping together “doesn’t surprise me in the least”. Practically, she tells me, it seems “logical” for flatmates to become intimate, both for bubble safety reasons, and because there’s some evidence that “people are looking for traits of security in a romantic partner more than before”.

“It makes sense too,” says Maxwell, because “sex is a natural mood booster… Everyone is feeling a little bit lonely right now. Sex could be a great sense of release, and [provide] a boosted mood.”

But Maxwell cautions that sleeping with a flatmate may only provide those benefits if you’re on the same page. That is, communication of expectations: whether the situation is monogamous or not, and a discussion about health risks once lockdown begins easing. Remember when Maxwell said disasters can also accelerate relationships in the wrong direction?

That was also true for Sarah and Logan, who didn’t have those essential communications. Logan ended up making moves on another flatmate, which made Sarah feel as if her “living security was lost”. The flatmate Logan hit on later moved out.

But the relational implications of lockdown aren’t just limited to sexual partners. Sarah noted that apart from the drama with Logan, the others in her flat have become closer as a unit. The same has happened in my own flat.

“We’ve all opened up during lockdown,” said Devika, my flatmate. “Yeah,” added Deb, “we’ve all cried at the kitchen table.”

That’s because although we’d all supported each other, and that made the time more tolerable – even, at times, enjoyable – no one was immune to the difficulties of lockdown. Anxieties were triggered, moods could be low, and all of us were struggling with the isolation from family and other friends.

The negative impacts of lockdown on mental health and wellbeing are well-documented. One national study found “8% of people experienced clinically significant increases [in depressive symptoms]” over the lockdown period. And that’s just “clinically significant” cases, where symptoms interfere with everyday function.

“Lockdown and Covid – especially the most recent lockdown – is a big stressor,” says Maxwell. That statement in itself is pretty self-evident. But what’s more surprising is how those around you can heighten (or lower) the impact. “Stressful contacts can really exacerbate and underline vulnerabilities,” says Maxwell.

That means if you have depressive or anxious tendencies, the pandemic context is likely to amplify those issues. If you live in an isolating environment, or with negative social contacts, that will likely also trigger unhealthy behaviours.

On the flip side, having healthy relationships can act as a “buffer” for stress. This can have huge positive impacts for health and wellbeing, with one study finding that strong social relationships can decrease mortality risk by 50%. For context, that’s the same effect on mortality as quitting smoking.

Like Sarah and Logan, many of us have experienced both sides.

Lily* grew both closer and apart from those around her. “The four of us [flatmates] only seeing each other brought us together,” she said, “but it also meant that when there was tension, we couldn’t leave and see other people to take our minds off things”. At the halfway point, there was a falling out. Lily said she believes they could’ve overcome their challenges had the lockdown not been in place. And although restrictions are easing, she thinks it may be “too late for us to make things better”.

That doesn’t surprise Maxwell, who notes that the lockdown environment is likely to create “disillusionment” with those you live with. But at a time when the support of others is most needed, what steps can we take to improve the wellbeing of ourselves, and those around us?

“We know providing support [to others] is taxing,” says Maxwell. “When our resources are already drained, it’s that much more effort to give proper support.”

That’s why looking after yourself, and acknowledging and working through your own emotions may be the best thing you can do for those around you. Maxwell emphasises the importance of “emotional regulation” – namely, expressing emotion in healthy ways, or trying to reappraise them by finding different ways of looking at the situation. At the same time, Maxwell warns against emotional suppression, as recent research demonstrates that suppressing emotions “exacerbates distress and reduces cognitive performance and self-control” as well as undermining mental health.

Maxwell acknowledges that it can be uncomfortable to communicate one’s feelings, but stresses it’s “worth it in the long run”, especially if there’s an issue that’s particularly important to you. “It’s OK to be a bit negative and direct” in these circumstances, says Maxwell, “you’re much better off actually just raising it. People are more likely to change if you communicate how serious an issue is [to you].”

She also gave some tips on how to ensure these conversations don’t spiral into arguments. “It sounds cheesy,” she laughs, “but it’s back to those ‘I’ statements.” That is, using ‘I’ statements to express your personal emotions, which can help prevent communication from feeling like an attack. Maxwell also stresses that communication should be focused on the behaviour, and not the person. Keep it to one specific instance, she says, because “the worst thing to do is throw in everything but the kitchen sink.”

Although it can be hard, communication is important for healthy relationships, which in turn is important for wellbeing. Maxwell notes that “people sometimes are trying so hard to keep the peace that they don’t raise concerns, and then they’re stewing on them”.

And that can result in the sort of environment that makes lockdown harder than it already is. “I know some flats who barely talk to each other,” said Deb, my own flatmate. “They’re at such odds that it’s just a passive aggressive state of being. It would be really harmful.”

For our flat, lockdown precipitated communication. I asked my flatmates why that might be, and Sherry summed it up best.

“If we didn’t rely on each other, and support each other,” she said, “we’d lose it.”