After her landlord dug up her prized garden, Zhang Wang was despondent. Then the help started pouring in. Oliver Lewis paid a visit to the Christchurch pensioner’s flat.

As a girl growing up in the Chinese countryside, Zhang Wang, the Christchurch pensioner who became an unlikely media sensation after her housing provider ripped up her cherished garden, experienced “much hardship”. She saw people starve and her own parents, poor farmers eking out a living from the soil, lost two children to malnutrition. When Wang was 9, a snake sunk its teeth into her finger while she was gathering grass for the family cow. Death by snakebite was common in her hometown, the octogenarian says. But Wang lived. Her uncle, who happened to be nearby, used his string belt as a tourniquet, stemming the flow of poison to stop it reaching her heart.

“God looked after me,” she says. Decades later, her finger is still disfigured.

Wang, a spritely 80-year-old with a bob of silver hair, has always valued the land. “She thinks if there’s good land to farm and you don’t farm then it’s wasted,” her daughter, Vicky Hamilton, says. The melodious, chiming sound of the two women speaking Mandarin fills the small flat in Addington, where Wang has lived since 2011. Hamilton, who met her husband after moving to New Zealand in 1995 to study, is here to translate. Wang followed in 1998 to help look after her new granddaughter. Even in Hangzhou, the huge city near Shanghai where she used to live before moving overseas, Wang had a garden. Gesturing upwards, she chuckles: it was on the roof of her seventh-storey apartment. To grow her pumpkins and beans, the incessant gardener had to shift large quantities of earth skywards. “Everywhere I live, I must have some place to dig,” she says. “I must dig.”

Wang is standing in the ruins, her mouth wide open in anguish like the figure in the Edvard Munch painting The Scream. Shortly before the photo was taken, the 80-year-old had called her daughter. “Hurry up and come,” she said. “They are destroying my garden.” When Hamilton arrived, Wang was pleading with the digger driver. “I cry: ‘Stop! Stop!’, but nothing,” she says. The devout Christian moved into her social housing unit a decade ago and immediately started clearing rubbish and transforming the backyard into a bountiful garden. Ōtautahi Community Housing Trust (ŌCHT), the organisation that runs the property, was clearly impressed – it gave her an award. The little flat, one of many in a series of low, brick buildings, stands out. There are trellises for beans, and the soil near the stairs leading up to the front door is all planted out. But the real masterpiece was out back, near the clothesline. Wang was away when the digger arrived. She had a hospital appointment that morning to get her hearing aids and ears checked, then she went shopping. When she got back, large parts of her creation had been turned to dirt. When The Spinoff visits in mid-June, the outline of the destroyed garden is still visible. Wang salvaged what she could. Inside the house is part of a Chinese yam, its white flesh exposed where it was sliced by the bucket of the digger. ŌCHT and Wang agreed in December 2019 and again in July 2020 that she would reduce the size of her garden, to contain it within an agreed area, but nothing really happened and no one told her a digger was coming. ŌCHT blamed it on a communication error. After a public backlash, the trust apologised profusely, installing raised planter boxes, providing soil and remediating the land as part of its apology. Some parts of the garden survived, including a 12-metre strip along the back fence full of daikon radish, silverbeet, coriander and a lone aloe vera plant. Today, a long strip of tape hangs limply from the fence: a warning for people not to trample the bare ground. It looks like a crime scene.

Inside her flat, Wang has boxes and boxes of dried corn and shelled runner beans. She shows The Spinoff a photo of her garden in its summer splendour, when the corn was growing tall in proud rows. “She’s always in the garden,” Vicky says. “She’s in the garden, at church, or at her group.” Since 2004, Wang has run the Chinese Joyful Club, a church-affiliated group for over 60s. They meet twice a week for dancing, singing and prayer. Ducking into her kitchen, Wang retrieves a machine she uses to grind corn to make into food for joyful club meetings. Club members come to her, too. About four years ago, a neighbour who was moving out asked Wang to continue their garden. Wang filled the space, against the far fence from her house, with Chinese herbs: 14 varieties of plants used to make traditional medicines. Before the digger came, her elderly friends would come by to collect plants to soak their feet with, to eat, or to soothe aches and pains. 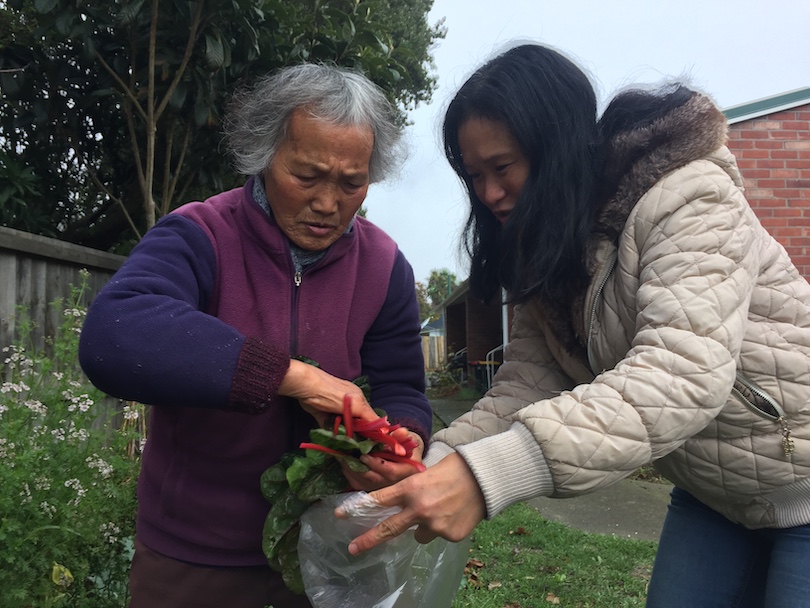 Zhang Wang harvesting greens to give to the writer with help from her daughter, Vicky Hamilton (Photo: Oliver Lewis)

Wang was born in 1941, eight years before Chairman Mao proclaimed the birth of the People’s Republic of China from the top of the Tiananmen Square gate. In the years to come, her life was shaped by the tectonic forces and changes unleashed by communism. Collectivisation of the countryside meant that, by 1955, Wang no longer had to look after the family cow. Instead, she went to boarding school, an hour’s walk from her hometown. To support herself and pay the school fees, the hardworking youth spent her holidays shifting dirt every day. Between 1960 and 1965, Wang studied civil engineering in Tangshan. After university, she moved to Beijing, where she spent the next several years designing coal-fired power plants. Her job took her all over China and abroad to Albania and Vietnam. After a career change and yet another move, Wang ended up in Hangzhou, where she returned to designing the power plants needed to to electrify the rapidly industrialising nation.

Throughout her long career, Wang always supported her family. During the decade-long tumult of the Cultural Revolution, a kind of nationwide mania intended to purge any opposition to Mao and his communist ideals, her brother was deemed a class enemy and lost his job. Wang went on to support his seven children, as well as her parents, for close to three decades. “She likes to share and give,” Hamilton says. “She’s always thinking about others first.” 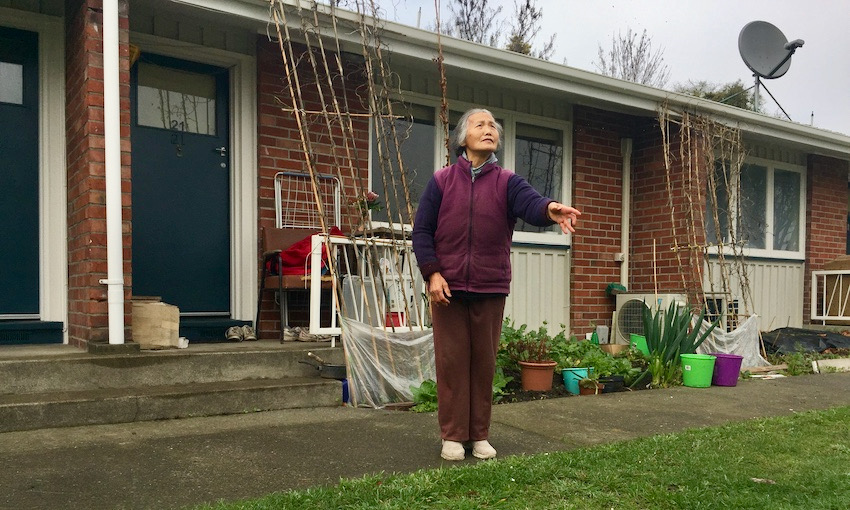 Not long after I arrive, Wang hurries to get a pair of scissors. Returning to her beloved garden, she bends down to cut some silverbeet, a picture of industriousness in her purple polar fleece on a cool Christchurch morning. I leave with a bag full of leafy greens, spring onions and a fleshy white daikon radish. Her neighbours get this kind of treatment on a regular basis. Wang even helped one person, a few flats down from her, set up their own little garden. And she doesn’t just give me vegetables. An hour into the interview, Wang stands up abruptly and disappears into the kitchen. It turns out I’m staying for lunch: a delicious spread of vegetarian dishes made with fresh produce from the garden. I tell Wang she’s a great cook. She says she’s terrible. It’s not true.

In the week after her garden was destroyed, supposedly because it was too big and too close to the clothesline, Wang was so upset Hamilton worried she would have a “heart attack”. But after her story was picked up by the media, the 80-year-old was buoyed by all the ensuing support. It was incredible, Hamilton says. More than 5,000 people signed a petition demanding ŌHCT reinstate Wang’s garden, a Givealittle raised $1,500 and people from around the country posted seeds and sent their best wishes. One North Islander even offered Wang a new place to live with access to a garden. How did all the attention make her feel? “Sorry,” Wang says. “She’s sorry that she’s disturbing other people,” Hamilton explains. Outside, birds are eating the bread Wang scattered for them earlier. 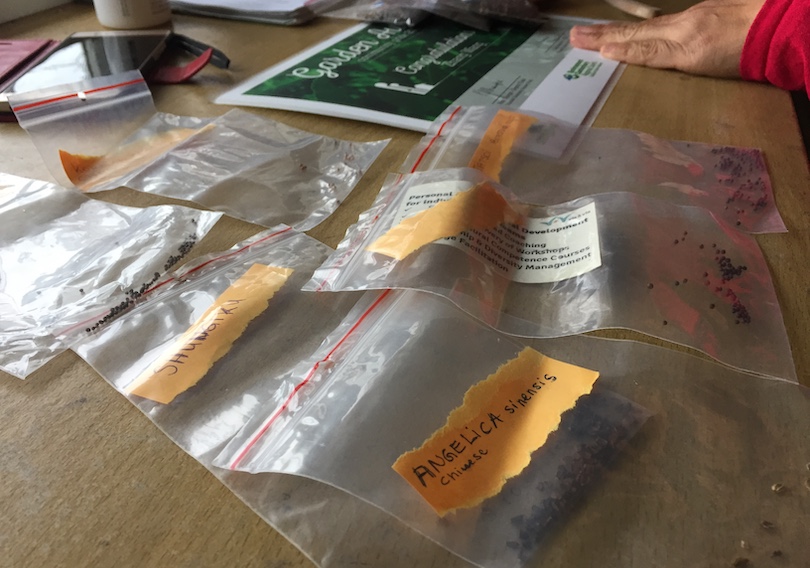 Seeds of the rare plants Wang lost when her garden was destroyed, gifted to her by supporters (Photo: Oliver Lewis)

Sorry or not, the support is still coming. The day before our visit, Wang cooked dumplings for volunteers from Addington Farm, a local charitable trust. They came with fertiliser for the new garden and helped plant bok choy in the planter boxes. Later that day, Wang had another visitor: Jacky Braid. The North Island woman was in town to drop off a card and donations from New Zealand Twitter users. After reading about the incident, Braid sourced a list of all the special plants Wang had lost. Using Twitter, she put the word out and worked with other people to find replacements. In an email to The Spinoff, Braid described Hamilton and her mother as “the most lovely and generous people”. Like most visitors, she didn’t leave empty-handed. Wang gave Braid four daikon radishes and a shopping bag full of walnuts to take away. She was so loaded up she had to buy an extra bag for the flight.

As I leave, similarly burdened with vegetables, Wang and Hamilton stand on the steps waving goodbye. Wang is indomitable, still joyful after a lifetime of hard work. The characters for Zhangxiang, her full given name, loosely translate to sweet-smelling camphor tree. Why? Because her parents wanted her to grow up strong and resilient – a tree with its roots buried deep in the earth. Wang hasn’t disappointed them. It may take years for her mother to fully restore what she lost, Hamilton says, but she will. Out of the destruction of her garden, Wang has made new friends. She is deeply thankful, the 80-year-old says.

“People are so good.”