The art world is being bombarded with something called ‘non-fungible tokens’. We asked artist and crypto expert Simon Denny to help us explain what they are.

At first glimpse, a gif of Nyan Cat is nothing special. It’s a bit cute, a bit nostalgic. So why did one sell for US$450,000? The worlds of cryptocurrency and art have one big thing in common: they’re really hard to understand. And in NFTs, like that outlandishly priced gif, they’ve come together to form an expensive, exciting glimpse of a future that is almost incomprehensible – but not quite!

New Zealand artist and public speaker Simon Denny has just landed in New York to open an exhibition. He’s also taking a lot of phone calls now that NFTs have gone mainstream; he’s been making artwork about crypto since 2015. With a little help from him, we break down what an NFT is, and whether you should be getting involved.

What is an NFT?

It stands for “non-fungible token”. “Fungible” means two things are interchangeable. For example, a $10 note is fungible. If you have two $10 notes, they’re basically the same. It doesn’t matter which one you use. Art is not fungible; one Ralph Hotere painting is not interchangeable with another.

Most cryptocurrencies are fungible tokens; one Bitcoin is worth the same as any other Bitcoin. Non-fungible tokens, then, are crypto tokens that are, basically, digital art; they’re stand-alone pieces. Totally non-interchangeable.

NFTs can be almost anything. There are videos, still images, and even music – Kings of Leon have announced their next album will be an NFT. “You can embed any file type, I think, into an NFT structure,” says Denny. “If I wanted to make an NFT today, I have a range of spaces to choose from.”

Do I need Ethereum to buy an NFT?

Ethereum is a cryptocurrency, similar to Bitcoin, and it’s what most NFT platforms use as money. You can download browser extensions like Dapper or Metamask and add Ethereum to it with your credit card. Some marketplaces like Nifty Gateway and MakersPlace accept credit card payments, but you’ll need a wallet address (which come with extensions like Metamask) to receive your NFT.

If you want to learn more about the blockchain technology underlying Ethereum, I recommend this video:

Who is buying NFTs?

Yeah, spending US$450,000 on a gif is pretty ridiculous. But Nyan Cat is a historic part of internet culture. “Art has always been about communities,” says Denny. “It’s about certain people with money signalling value – the way they buy art is to gesture affinity and display a certain wealth and savvy.

“In a way, with this new wealth that’s emerged in a crypto context, it’s the same thing but in a different social milieu, and also with different values in terms of what’s interesting in art.”

The art valued by digital collectors isn’t necessarily Warhol or Monet or Klimt. They’re more likely to veer toward graphic art and drop culture; NBA Topshots, which releases NFT “drops” of small videos of moments from NBA games, is so popular it isn’t allowing any new sign-ups.

“The type of person that might have crypto wealth could be a person that is maybe familiar with collectibles, and really values that mode of cultural expression,” says Denny.

Who is making NFTs?

They’re often connected to developer or blockchain communities, if not actively working in them, but graphic artists and digital painters are naturally aligned with this kind of world. Auckland-based digital artist Richard Parry has turned some of his previous work into NFTs; they’re deconstructed Gameboys. A perfect pitch for the internet native audience. He made more than 11ETH (NZ$24,000) selling them in one day.

“I have no idea who bought my art,” he says. “They own a ETH wallet of over $900,000 and seem to be flipping NFTs for quite a fair income.” The fast-paced world of NFT creation is new and bizarre to him, but he’s all in. “I intend to roll with this gold rush until it ends or I end.”

You don’t need to be a professional artist to make an NFT. I made this one. It’s not very good, but if I can do it – you can. 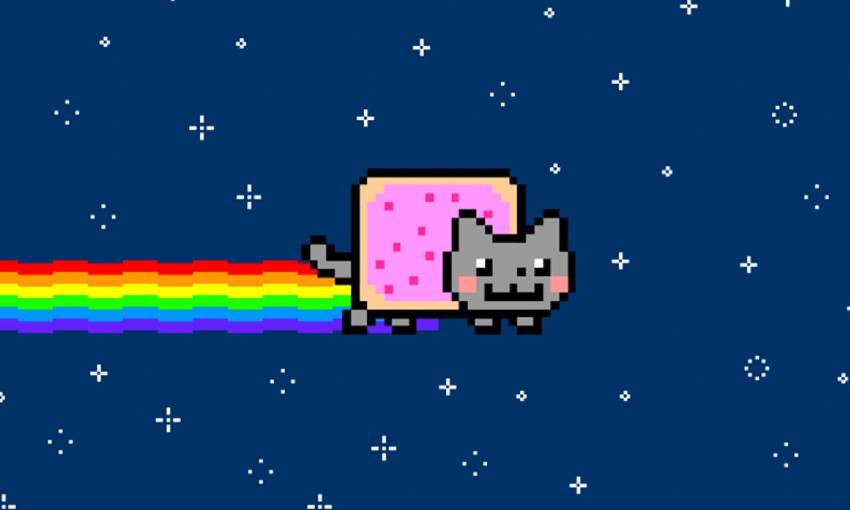 Yes. The ecosystem that supports them is based around decentralisation, a concept Denny describes as being a core part of “something that is maybe a ‘hyper-capitalism’”.

“[Decentralisation is] recently coming out of a particular history of Silicon Valley ideology, maybe from the mid-century on and the beginning of the internet,” he says. “It’s crossed over with hippie culture and the idea of being self-sustaining and being your own individual governing unit.”

The world of crypto is explicitly concerned with redesigning money, and NFTs are no exception. “There’s an existing money system – the so-called ‘fiat’ system,” says Denny. “Bitcoin comes with a bunch of technical and political claims that push back on that.

“Some would say it’s on the right-wing side of even mainstream economics.”

Despite this, some traditionally left-wing communities – like artists and musicians – have embraced it as a tool. “It’s pitched as something that pushes back on elites, but in other ways it can be seen as another ponzi scheme that serves people who get in first and people already at the top,” says Denny.

Are NFTs/Bitcoin bad for the environment?

“It’s power hungry, to a tune you would not believe,” says Denny. “To keep one NFT up, in theory, takes the entire electricity of a European citizen for a month. There’s really intense energy costs with [Ethereum technology].” Ethereum, Bitcoin and other currencies that use a mechanism called “proof of work” are those most responsible for crypto’s most egregious environmental costs.

He points out the crypto community stance on this is that trust has a cost. Using cryptocurrency and NFTs comes with a totally transparent ledger (the blockchain), whereas the fiat system is seen by crypto enthusiuasts as murky and unaccountable. The cost of crypto is measurable. How could you measure the cost of the financial world? “It’s a very ethereal metric to grasp for,” says Denny.

Ethereum has a big community around it, which is what gives NFTs such a good platform – the environmental drawbacks likely won’t disappear soon, but neither will Ethereum. “Because it has this major use space, and there’s other stuff built on top of it, it’s likely to stay around.”

Are NFTs the future?

Imagine coming home from a long day in the data mines and relaxing on your smart futon, the walls flickering with large televisions in frames displaying your NFTs. One is titled “Real Girlfriend”, and she cost 5ETH.

“There will be a crypto-native social web one day, where likes are money,” says Denny. “That’s likelythe world we’re heading towards.”

Is it inevitable? “It’s not,” he says. “But there’s this idea of hyperstition that’s popular in crypto: repeating something enough makes it true.”