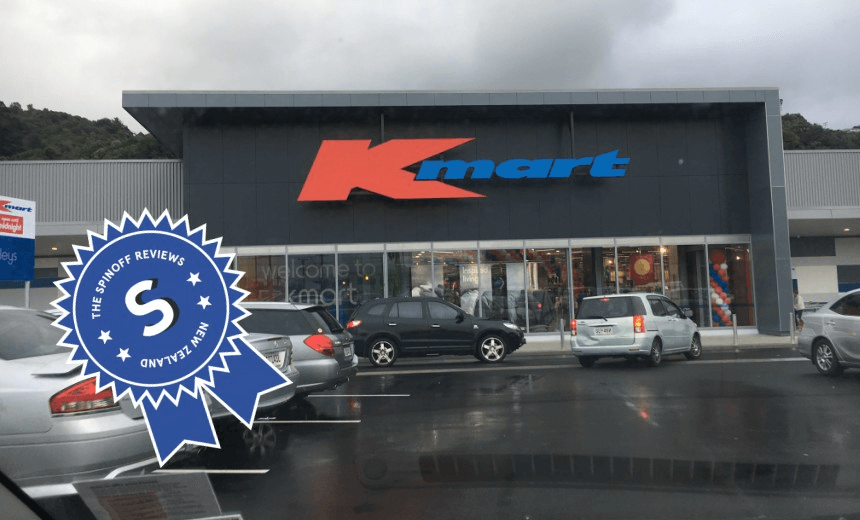 We review the entire country and culture of New Zealand, one thing at a time. Today: Madeleine Chapman makes a pilgrimage to the frenzy-sparking new Kmart in the Hutt.

The staff at the newly opened Kmart in Petone wave green pool noodles in the air to signal an available checkout. It’s funny, it’s genius, and it’s exactly what’s needed because no one can see through the crowds of shoppers waiting to buy things they never knew they needed.

Petone Kmart has caused the greater Wellington region to lose its collective mind. Customers camped out the night before it opened, police had to monitor traffic heading into the carpark, someone definitely got injured. The traffic in Petone has never been as bad as it was on Monday, a public holiday and the worst day to visit a mega store. The giant Warehouse and Briscoes stores were within sight and yet a distant memory for the hundreds of shoppers thirsty for a DARE TO #DREAM light box.

I was sceptical. It is, after all, just another Kmart. There’s already one in Porirua. How great could it be? It was pretty bloody great. Despite the traffic heading towards it, the actual parking lot was huge and had more than enough parks. They correctly estimated that everyone would lose their shit and all go at once. The entrance was packed with people who maybe didn’t realise there was more to the store than just one aisle. It was chaos, but somehow it was organised chaos.

In the sleepwear section, a teenager was on the phone describing every slipper on the shelf. “There’s hot pink with white spots, a light green with hearts….yeah they’re all really fluffy.” She’d been sent on a mission and was taking it very seriously.

My sister and I didn’t have anything we needed but pretty soon we were picking out pyjamas (“it’s too cold now”), and blankets (“for the car”), before realising we’d need to come back again when we had five hours to browse. I was already running late for a meeting (never shop at Kmart if you’re in a hurry) so we joined the massive checkout line just to buy a chocolate bar. I didn’t need to buy it but I wanted to judge the wait time in peak customer traffic. Well, colour me impressed because, thanks to those hilarious pool noodles, that line moved faster than I’ve ever moved in my life.

On the way out, a worker was checking receipts. As we approached her, I held out my Time Out. She took one look at my measly purchase and didn’t even bother, dismissing me like the lousy excuse for a Kmart shopper I am.

As we drove away from the affordable haven in Petone, my sister and I discussed all the things we just had to get on our next trip out. Yes, it’s just a Kmart. Yes, there’s already one in Porirua. But I now appreciate that a Kmart within a shopping mall is really only half a Kmart. Petone has the real thing now and I only hope that they change their sign to a backlit lightbox with black lettering.