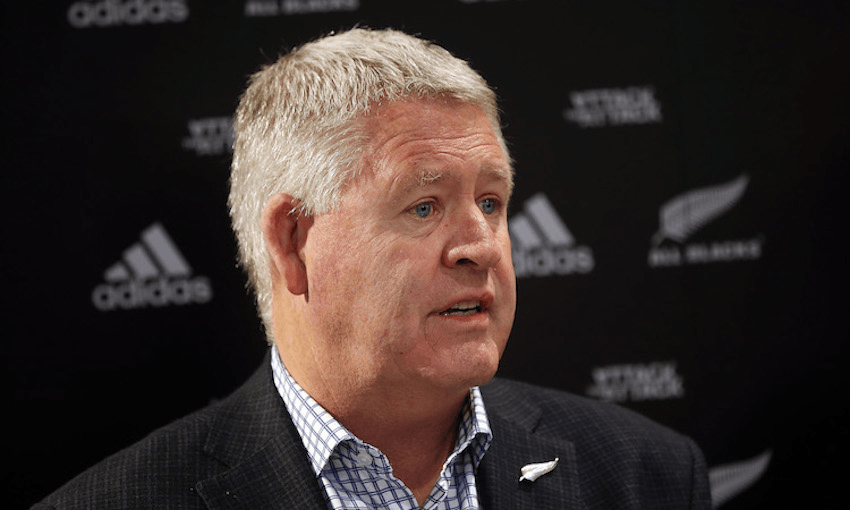 Steve Tew is leaving NZ Rugby. Here’s a novel suggestion for his replacement

Times have changed, writes veteran sports journalist Trevor McKewen, and so should rugby.

Steve Tew was a man for the ages in rugby. But that age is over.

Tew’s quarter century of rugby administration is marked by strong success by the All Blacks. When it came to the shop window, he was the perfect administrator for a particularly challenging time.

But rugby is no longer just about the All Blacks. Concussion, inherent sexism, testosterone-charged boardrooms and schoolboy poaching are just some of the problems lingering skin deep in our national code.

Tew has also shown the good sense to get out now and can rightfully take solace in the many good things he has achieved, most notably keeping foreign poachers at bay from our best horse meat. It may be that he is tired of running around putting fingers and thumbs in dykes now. Because that is very much how it has felt in recent years as New Zealand Rugby struggles to defy the inevitable.

Now is the time for change. Next year NZ Rugby will have a new CEO, new All Blacks coach and a new national skipper. It will be quite a brains trust swap once Tew, Steve Hansen and Kieran Reid depart.

And who replaces Tew may well be the most important decision rugby in this country has made since Kerry Packer and Rupert Murdoch turned the code upside down in 1995 scrapping over broadcast rights (and ironically funding the beginning of Tew’s rugby administration career as the first CEO of the Crusaders in Super Rugby).

Tew provided some hints of the challenges that lie ahead in his valedictory of sorts at NZ Rugby HQ on Wednesday when he announced his intention to stand down after 12 years as CEO.

He spoke of rugby’s need to adapt its content to a millennial-minded audience who consume and purchase in different ways to the baby boomers who have been the lifeblood of the sport since Tew has been there.

And the challenge of remaining relevant to a society where the physicality of 100 kilogram plus men hurtling themselves at each other, and the ramifications of that, is being increasingly analysed.

Dare I say it, but could it be time for the first woman CEO of New Zealand Rugby?

There is a strong argument to say that time is here.

Tew was very adept at working the masculinity of rugby to the betterment of NZ Rugby and the All Blacks. He was as comfortable in the All Blacks dressing room as he was in World Rugby’s board room. His ability to adapt and know how the overwhelmingly male bastions of rugby worked contributed to his lengthy tenure.

But now is the time for a softer hand.

Rugby has not moved as fast as it should to adapt to a changing New Zealand. Part of that problem is the dominance of men in rugby boardrooms, starting with NZ Rugby where only one of the 11 board members is a female.

Sports minister Grant Robertson recently put national sporting organisations on notice that they could expect government funding to be withheld if they failed to have 40% female representation on their boards by the end of 2021.

NZ Rugby clearly has some work to do in that measure. But appointing a female CEO would be a good start.

There is a solid contender should NZ Rugby’s Board want to look for one.

Dame Therese Walsh is currently the chair of the TVNZ Board. She has worked in a senior capacity at NZ Rugby previously, joining the organisation not long after Tew in 2001. As chief operating officer, she quickly won the respect and confidence of colleagues and eventually became central to New Zealand’s successful 2011 World Cup hosting rights.

Following that high point, Dame Therese was approached to run the New Zealand end of the 2015 Cricket World Cup hosted by Australia and New Zealand where she did another sterling job.

The long apprenticeship at the sports coalface makes Walsh an ideal candidate to replace Tew, should she be interested.

Her board experience in leading TVNZ at a challenged time for the media industry will have added an acute understanding of content and broadcasting results.

A savvy and steady hand to negotiate the next broadcasting agreement, presenting a friendly face to women and one willing to listen is arguably what NZ Rugby needs the most right now.