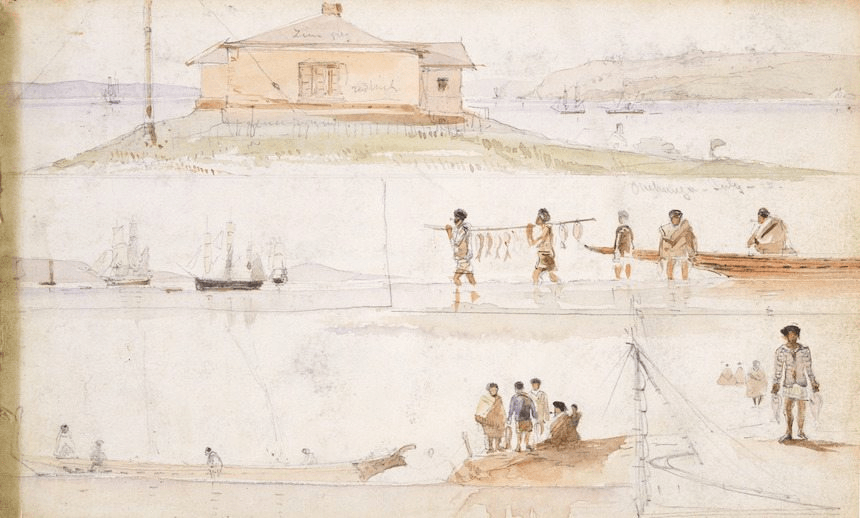 Through their bases at Onehunga, Māngere and elsewhere, the Waikato iwi had ready access to the Auckland market for their produce in the pre-Waikato War period. These sketches depict trading activities at Onehunga. Reference: Alexander Turnbull Library, B-045-001, watercolour by Edward Arthur Williams

‘The great war for NZ broke out less than 50 km from Queen St’: Vincent O’Malley on the Waikato War and the making of Auckland

Through their bases at Onehunga, Māngere and elsewhere, the Waikato iwi had ready access to the Auckland market for their produce in the pre-Waikato War period. These sketches depict trading activities at Onehunga. Reference: Alexander Turnbull Library, B-045-001, watercolour by Edward Arthur Williams

In The Great War for New Zealand, historian Vincent O’Malley tells the story of the Waikato War of the 1860s – how it set back Māori-Pākehā relations by generations and changed the course of New Zealand history for good. Here, in an original essay for The Spinoff, he explains how the war helped create modern Auckland.

In 1845 the small township of Auckland (population 3635) faced an existential crisis. War raged in the north and it was rumoured that the assistance of the powerful Tainui tribes had been sought for an attack on the settlement. A nightmare scenario for the town’s residents was the prospect of a simultaneous assault from the north and south, with Ngāpuhi and Tainui combining to virtually assure Auckland’s destruction.

Yet when a delegation came south to solicit assistance from paramount Tainui rangatira Te Wherowhero, the response was emphatic. “You must fight me if you come on to Auckland; for these Europeans are under my protection,” he told them. In Māori terms, Te Wherowhero made the position even clearer, referring to Auckland as the hem of his cloak and in this way placing the settlement under his personal tapu. An attack on Auckland would be an attack on him.

Reinforcing this point, in August 1845 the government built a cottage for Te Wherowhero within Auckland Domain, close to where the museum currently stands. It was one of several residences the chief had across the Tāmaki region. A year earlier the Tainui tribes (population 18,400) had hosted a massive hākari (feast) on their Remuera estate, attended by over 3400 Māori guests and more than 1000 Europeans. There could be no more telling reminder of the immense power and prestige of Waikato-Tainui at this time.

In the mid-1830s Te Wherowhero had personally escorted the various tribes back to Tāmaki after more than a decade spent taking refuge in Waikato during the height of the ‘musket wars’. After 1840 his role as guardian of the peace was extended to the settlers in the new town of Auckland. They were largely dependent on his protection and knew it.

By 1849 this role had been formalised when over 120 Tainui men and their families were allocated lands at Māngere in return for regular military duties in protecting Auckland (precisely the same terms on which military pensioners from the British Army had been granted lands at Howick and elsewhere). The Waikato tribes had a long association with the Manukau Harbour especially and Māngere became the centre of a flourishing Tainui settlement.

But Tainui’s role was not limited to defending the people of Auckland. In 1844 the Southern Cross newspaper commented that “the present European population…would have been literally starved out of the country but for the extraordinary exertions made by the aboriginal inhabitants to supply them with cheap provisions”. Years later, the same newspaper (which eventually merged with the New Zealand Herald) would vehemently call for the Tainui tribes to be attacked and their lands stripped from them. But at a time when settlers were entirely dependent on the tribes for their survival, it could happily describe Māori as “the greatest benefit and the greatest blessing we have in New Zealand”.

Tainui and other iwi developed a thriving economy based on feeding the settlers of Auckland. By the 1850s flour mills were dotted across the Waikato landscape and produce was being exported as far as the goldfields of California and Victoria. Māori were New Zealand’s leading export earners and key contributors to government coffers. Tainui were at the forefront of these developments and most observers in the early 1850s would have found it almost inconceivable that less than a decade later they would stand accused of plotting the imminent massacre of Auckland’s residents.

Those allegations were not only entirely unfounded but also illogical. Destroying the key outlet for their produce would have been suicidal for Tainui. Their wealth and therefore power depended to a large degree on Auckland’s ongoing wellbeing. But how had it even come to pass that they might be accused of such a thing?

For one thing, as settler numbers grew their reliance upon Māori lessened (at the same time that demand for Māori land increased). Lurking Victorian assumptions of racial superiority over ‘native’ peoples began to come to the fore. Great rangatira complained of being racially abused whenever they visited Pākehā townships like Auckland, in contrast to the great hospitality that even lowly Europeans continued to receive from Māori. In 1858 Europeans in New Zealand outnumbered Māori for the first time. And while Pākehā were happy for Māori to feed and defend them, they were not prepared to share the governance of the colony with the chiefs. In 1852 a new constitution for the colony established a parliament (and provincial assemblies) from which Māori were effectively excluded because the right to vote was based on European forms of land tenure.

The Kīngitanga (King movement) was one of the ways in which Māori responded. Despite initial reluctance, in 1858 an elderly Te Wherowhero (now called Pōtatau Te Wherowhero) was raised up as the first king. Some Europeans welcomed this development, seeing it as a positive reform that would improve social order and governance within Māori communities. Others chose to brand it as a challenge to the Crown’s authority. That was a difficult position to sustain given that Queen Victoria was described as “a fence for us all…Maoris and Pakehas” by Wiremu Tamihana (known as the ‘kingmaker’ by Europeans for his role in anointing the new king). Nevertheless, that the Kīngitanga could not be allowed to stand became official Crown policy, paving the way for the invasion of its Waikato heartland in July 1863.

In this way, the ‘great war for New Zealand’ broke out less than 50 kilometres from Queen Street. European men within Auckland aged between 16 and 55 were conscripted for military service (MPs, lunatics and priests were exempted). Others volunteered. Meanwhile, Māori within the township were placed under a nightly curfew and those deemed ‘friendly’ issued with arm badges to protect them from assault by settlers. Shopkeepers found the presence of more than 12,000 imperial troops a huge boon for business. Some observers, including some of the troops, began to suspect that the war was being prolonged for their benefit.

Auckland’s future as a major site of commerce was secured and with it the seeds sown for the North Island’s eventual dominance over the south. In the days immediately prior to the war, the Tainui residents of Māngere and other settlements in South Auckland had been forcibly evicted from their homes. Their lands were subsequently confiscated, houses and property looted or destroyed, horses and cattle seized by settlers for sale in Auckland. Generations of Tainui were condemned to lives of poverty and landlessness, while the fertile confiscated lands of Waikato enriched a handful of Auckland speculators (some of whom, like Thomas Russell and Frederick Whitaker, were members of the government at the time of the invasion). These lands would eventually form the basis of a lucrative dairy industry from which Māori were mostly sidelined.

The Waikato War helped transform Auckland into what it is today. It also marked the point at which the Treaty of Waitangi was cast aside for the next century or more. Māori aspirations for mutual prosperity and partnership went out the window at the same time. An era of unbridled Pākehā hegemony was ushered in instead. But before that time, Tainui (along with Ngāti Whātua and other iwi) had contributed hugely to the development of Auckland. That is a story, like the wider history of the Waikato War and the other conflicts fought on these shores, that is little known or understood today outside the iwi concerned. An invisible history that is everywhere. If we only looked.

Vincent O’Malley is the author of The Great War for New Zealand, published by Bridget Williams Books and longlisted for the Royal Society of New Zealand Award for General Non-Fiction at the 2017 Ockham New Zealand Book Awards.

The Spinoff has one copy of Vincent O’Malley’s The Great War for New Zealand (Bridget Williams Books, $80) to give away. To enter the draw, email your name and delivery address to info@thespinoff.co.nz. Entries close at midday on December 12.