Welcome to The Spinoff’s live updates for December 5. Get in touch at info@thespinoff.co.nz

The sunny news of zero new cases in New Zealand finds its tragic contrast in ongoing reports around the world. In Brazil, for example, the latest officially reported tally recorded 43,209 new cases and 664 deaths in one day.

The United States suffered its most fatal day of Covid-19 yet on Wednesday, with 2,885 people reported to have died of the coronavirus. Friday meanwhile saw a record number of new cases – 228,407 – and 2,568 deaths, according to Reuters. Donald Trump is currently holding a rally, which will almost certainly be further spreading the deadly virus, in Georgia.

The below is via Johns Hopkins University. It’s excuse enough to roll out the Morris Zero gif …

11.00am: Ardern meeting families and victims in Christchurch

The prime minister, Jacinda Ardern, has this morning been meeting with Christchurch mosque shooting victims and their families ahead of the public release of the Royal Commission report, Stuff reports.

“Ardern arrived shortly after 10am this morning at the Ngā Hau E Whā National Marae, Christchurch and was welcomed along with a group of MPs. They are attending a hui with those directly affected by the terror shootings. Following the hui she will address media, however she will not speak about the contents of the inquiry.”

Advance copies of the 792-page Royal Commission report into the Christchurch mosque attacks of 2019 has today been provided to families of victims, RNZ reports. The report, with significant passages redacted, is expected to be tabled in parliament on Tuesday, 20 months after the inquiry began.

Anjum Rahman wrote for the Spinoff last week about the value of the inquiry, but also its shortcomings, here.

For many years, commentators have asked, usually at moments when there’s not much else to talk about, whether or not the Greens might open the door to working with the National Party. The answer usually has been “nah”, or “doubt it”, or “don’t be silly”, but this morning at the Newshub Nation Christmas Party the two parties signally laid the groundwork for future political marriage through the medium of song. Specifically, a Wham! song. National’s Doctor Deputy Shane Reti on electric guitar strummed like Angus Young while the Green co-leader Marama Davidson and new MP Teanau Tuiono sang their hearts out, and sometimes they were even the right words. 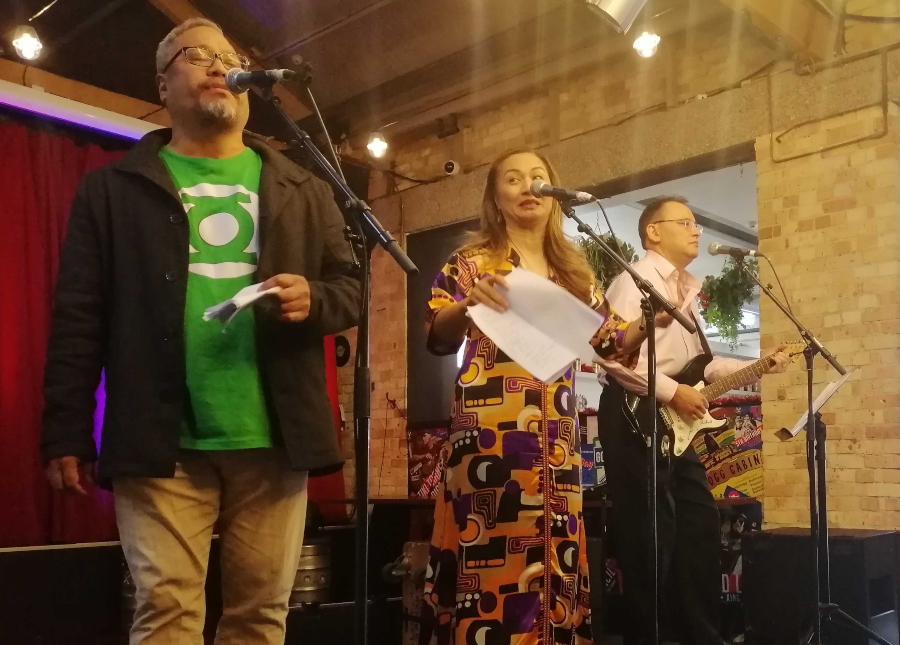 In other news lines from this morning’s event: You can watch it here.

If you live in or are passing through Auckland this summer, top of the to-do list will be a visit to Auckland Art Gallery Toi o Tāmaki to see Toi Tū Toi Ora: Contemporary Māori Art. The scale is amazing: seven decades of Māori art, 300 works, 111 artists. Opening today and running to May 9, it’s the gallery’s biggest ever show, and an incredible undertaking by curator Nigel Borell, whose friends and supporters showed their admiration by sporting NB stickers at last night’s opening.

I saw about a quarter, if that, of it last night, and I’m looking forward very much to the rest. What I did see was stunningly good. A newly commissioned, towering installation by Mata Aho Collective and Maureen Lander was especially mind-blowing: exhilarating, affecting, surprising.

We’ll have a write-up of the exhibition and an interview with Borell on the Spinoff next week from the one and only Leonie Hayden. But do go check it out if you can. It feels momentous. The Ministry of Health has reported nine new cases of Covid-19 in New Zealand, all in managed isolation. One is a historical case.

Here are the details on the new active cases, per the ministry release:

“Once again, the varied origins of these cases is a clear reminder that as Covid-19 continues to batter countries and jurisdictions around the globe, mandatory isolation and testing will continue to be of critical importance as high numbers of New Zealanders return home before the holiday period,” is the message from the ministry. “The Ministry of Health again wants to thank all staff at the managed isolation and quarantine facilities for their efforts in keeping New Zealand safe.”

And so say all of us.

The head of the World Health Organisation has delivered a message of hope as vaccines begin to near roll-out, saying the world “can begin to dream about the end of the pandemic”. It came with a blunt warning, however, to the rich world, who must not “trample” on poor nations “in the stampede for vaccines”.

Speaking at a UN  General Assembly session on Covid-19, Tedros Adhanom Ghebreyesus commended “inspiring acts of compassion and self-sacrifice, breathtaking feats of science and innovation, and heartwarming demonstrations of solidarity”, but noted also “disturbing signs of self-interest, blame-shifting and divisions”.

Without naming any countries, Tedros noted that parts of the world were facing a grave upsurge in cases, pointing to the vulnerability of places where “science is drowned out by conspiracy theories, where solidarity is undermined by division, where sacrifice is substituted with self interest, the virus thrives, the virus spreads”.