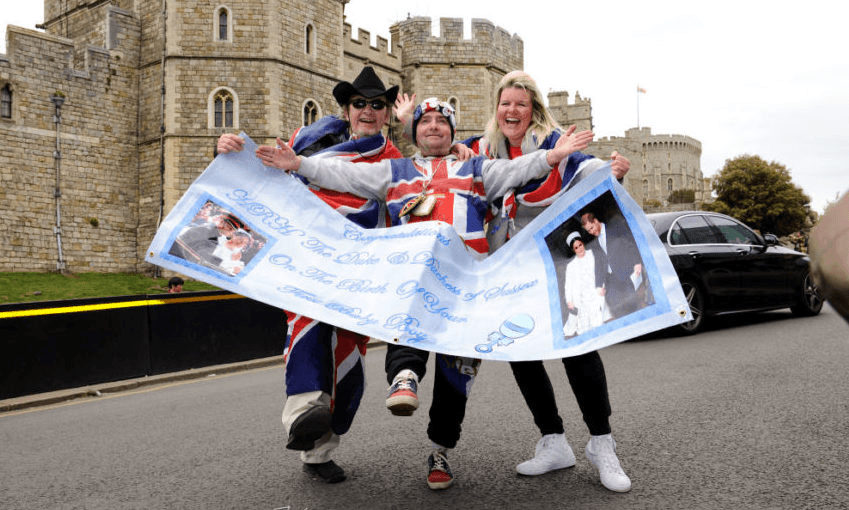 Some people expressing their enthusiasm about a baby. (Photo by GOR/Getty Images)

Some people expressing their enthusiasm about a baby. (Photo by GOR/Getty Images)

Meghan and Harry have welcomed a new human into the world. And the UK media could hardly be happier, reports Elle Hunt from London.

Greetings from London where – you may have heard – a baby has been born. At 5.26am local time on Monday, the duchess formerly known as Meghan Markle gave birth to a baby boy – as announced, in the modern royal family way, with a tasteful post on Instagram.

And not a moment too soon, I say. Certain sections of the British media have been quite literally running on empty ever since the Duchess of Sussex’s due date was narrowed down to “late April, or possibly early May”.

Last Thursday, the Express newspaper alleged that there had been a “royal baby SHOCK”, suggesting that said royal baby had in fact been born weeks ago, and concealed ever since – perhaps just wishful thinking, because then it would have all been over.

Late on Sunday night the London Evening Standard was publishing hourly updates of “Royal baby news live”, determinedly disregarding the fact that there was no news. One representative update: “A royal source told ET that ‘Megan looks absolutely radiant’ and is “looking forward to the birth2 [sic]. She also apparently enjoying [sic] a “love-filled time” in Frogmore Cottage.” (Obviously the pace of the developing story did not allow for subediting.)

It is undeniably hard to wring words out of an as-yet-unborn baby, in the same way that it is hard to be “a little bit pregnant” – there’s just very little room for ambiguity. My favourite contributions to the dialogue were those hoping that the baby would be born on International Star Wars Day, May the Fourth (Be With You) – or May 5, the anniversary of Meghan Markle’s now-defunct lifestyle blog, The Tig (“another momentous day”).

The trouble is, even now that Baby Sussex is finally here, and the “notice of birth” has gone on display on the forecourt of Buckingham Palace like a menu outside a touristy restaurant, there is still not much to say. After the official announcement on Monday afternoon, the BBC struggled to maintain momentum on its live coverage, just as it had six years ago with the long wait for the Duke and Duchess of Cambridge and the birth of Prince George.

This time, however, there was to be no stand-up on the steps of St Mary’s. We know no name (TBD, apparently), no details of the birth (at home? In water? Or – could it be inferred from Harry’s awestruck tone in the presser – with great difficulty?). Just a sex, a weight, a time, and a list of titles said to be “delighted with the news”.

That’s nowhere near enough to satisfy the public, or at least the tabloids. Some commentators had responded to the news that Meghan would not be making a post-birth public appearance to parade her newborn baby in front of them as though it were a personal affront, not a deviation from a relatively recent tradition.

But monarchists are particularly sensitive about any deviations from tradition right now. As the recent, often thinly veiled (and vaguely sourced) reports of Harry and William’s separating households go to show, the royal family is changing in ways that many conservatives (and also racists) are not comfortable with – and Meghan makes a convenient scapegoat for all of them. Consider the high crossover between hard-Brexiters and the conspiracy theorists who argued vociferously online that she was never pregnant, for reasons known only to themselves but that don’t denote rich social lives.

As Afua Hirsch recently wrote in the Guardian, Meghan’s arrival in the royal family “invented a new media genre of dog-whistle-mixed-race-princess-bashing: the pushy American who has the nerve to put her baby bump front and centre (seriously – where else does one put one’s baby bump?), who has the chutzpah to exercise choice over who delivers her child, and who stubbornly refuses to fit in with royal convention and protocol”.

That Meghan has singled herself out as a threat by wearing dark nail polish, closing car doors by herself, and choosing her own gynaecologists says more about royal convention and protocol than it does about her. But even though her baby, as seventh in line to the throne, is unlikely to ever be crowned king, like his mother he embodies that shift towards unthinkable modernity – towards green juices and yoga practice and announcing births on Instagram instead of printed out and displayed on a golden board.

This intense, unsustained scrutiny over Baby Sussex – what new-age rituals he was undeniably born of, how “unusual” a name his parents will push the poor Queen to sign off on – is in part an attempt to tell the future of “the Firm”, and by extension that of Brexit-torn Britain.

Yes, it’s a lot to put on a baby. But the live bloggers will find something to say. They always do.