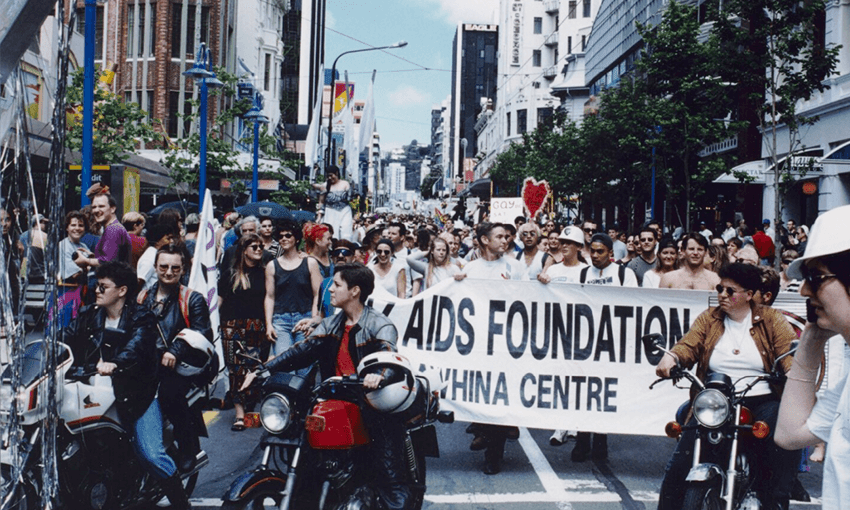 As infection rates decline, the New Zealand Aids Foundation is looking ahead under a new name that celebrates one of its co-founders.

The year is 1983. Consensual sex between men remains a crime punishable by imprisonment, and law reform is still another three years away. The first cases of Aids in Aotearoa are being reported, two years after the virus was identified in the US for the first time. It’s initially described as “gay cancer”, a reflection of the ensuing moral panic as presenting patients tend to be gay men, and sections of society continue to stigmatise and torment queer people. As the illness morphs into a public health crisis, and as more and more people die, Aids will eventually come to be understood as the result of HIV, a virus that attacks and weakens people’s immune systems. To date, no cure exists.

Auckland-born Bruce Burnett was one of the earliest pioneers of New Zealand’s response to HIV. A former hospitality owner who studied cuisine in Europe, Burnett moved to the US in 1982 while in his 20s and spent time volunteering at a San Francisco non-profit providing peer support and guidance to people affected by HIV/Aids and other life-threatening conditions. While in the US, he was diagnosed with Aids-related complex, a term used in the early years of the epidemic to describe people living with HIV who had only mild symptoms. He returned home in November 1983 with swollen lymph glands and persistent intestinal infection. Consequently, he flung himself into HIV prevention – with the help of others. Clinics were set up, volunteer counsellors were trained, leaflets were written and disseminated, misinformation was challenged, funding was sourced, and a nationwide support organisation was established for those living with and affected by HIV/Aids.

A pioneering campaigner, a change-maker, and ultimately a life-saver is how Robyn Mihaere describes her brother. “It’s hard to comprehend how brave he was to publicly reveal he was living with HIV at a time when those living with the disease were shunned and persecuted, and homosexuality, sex work and needle possession were all still illegal,” Mihaere says. Burnett died from Aids-related illness in 1985, aged 30, but not before signing a document that secured the first round of government funding for what would soon become the New Zealand Aids Foundation (NZAF).

Burnett’s legacy has now been immortalised, with the NZAF this week changing its name to the Burnett Foundation Aotearoa. It’s a “big deal” for an organisation that has kept Aids in its name for 37 years, says new chief executive Joe Rich. The foundation heard feedback that Aids was losing relevance as the organisation addresses different needs, and any name change had to honour “the sheer bravery and the incredible work that was done in the early days, where it was really a crisis in every sense of the word”, Rich says. “It was a real fight for people to survive, to create the social environment where we could even talk about gay men having safe sex.”

Volunteers in the early days would support people living with HIV by going into their homes and helping them with tasks they could no longer do themselves, Rich says. Forty years on, Burnett Foundation is helping them flourish. Rodrigo Olin, part of the foundation’s services and outreach team, has been living with HIV for nearly 20 years. First diagnosed in his birth country of Mexico, Olin had to wait until his immune system was compromised enough to access antiretroviral treatment. Within weeks of receiving medical care, however, he reduced the amount of HIV in his blood (viral load) to undetectable levels. People living with HIV cannot sexually transmit the virus if they are being treated and can maintain an undetectable viral load for at least six months – a status known as “undetectable equals untransmissible” or “U=U”.

While Olin has been fortunate to have met people for whom his status has made no difference to their relationship, he has also encountered outdated attitudes – even from those within the MSM (men who have sex with men) community, in describing themselves as “clean” when it comes to being “free” of HIV or sexually transmitted infections. Stigma has also come from official sources. On immigrating to Aotearoa a decade ago, and in a long-term relationship with a New Zealander, Olin couldn’t apply for a permanent residency visa because Immigration New Zealand deemed HIV a medical condition likely to impose significant health costs on the country. That condition was only removed in October 2021, although visa applicants are still required to test for HIV if they intend to stay longer than a year. Still, across the past 20 years, much has changed for the better, says Olin. He feels empowered knowing he cannot transmit the virus and he can expect to live as long a life as someone who doesn’t live with HIV. “The change has mostly come in how I perceive myself, not like a toxic agent walking around the streets, but more like a regular person,” he says.

The name change comes at a time when infection rates are the lowest they’ve been in 20 years. The reported number of New Zealanders diagnosed with HIV in 2021 – 112 people – is the lowest since 2001, according to the University of Otago’s Aids Epidemiology Group, which is responsible for monitoring the epidemic in Aotearoa. Its latest data shows MSM continue to be the most affected by the virus, making up nearly two-thirds of total infections. Locally acquired HIV infections for the MSM community peaked at 97 in 2016. Since then, though, MSM infections have fallen 70% to 29 in 2021. Sixteen people were last year diagnosed with Aids, of whom seven were MSM and seven were heterosexual men and women. No one reportedly died of Aids-related illness in 2021.

HIV, short for human immunodeficiency virus, is a kind of retrovirus that invades the genetic material of our cells, attacking immune systems and working to kill off healthy cells. It’s transmissible only through unprotected vaginal or anal sex, breastfeeding, sharing needles and/or via blood. Aids (Acquired immune deficiency syndrome) is a more advanced form of HIV, caused by contracting “opportunistic infections” that occur more often or more severely in people whose immune systems have been weakened so much by HIV that they can’t fight the illnesses off. Through medical advancements and scientific breakthroughs, both viruses are preventable, although HIV remains in people’s bodies for life. People living with HIV and receiving treatment live long, healthy lives, and may never develop Aids. There’s no cure for HIV, though an American research team this year reported it had possibly “cured” the infection in a woman for the first time using a cutting-edge stem cell transplant method that had enabled her to enter remission.

The declining HIV rate in Aotearoa can be attributed to a “combination prevention” response that advocates condom and lubricant use, regular testing for HIV and other STIs, rapid linkage to clinical care, and the importance of U=U and drugs such as PrEP, or pre-exposure prophylaxis, a pill that can reduce the likelihood of developing HIV from sex or injection drug use by up to 99%. Prevention is working, says Dr Peter Saxton, part of the Aids Epidemiology Group and the inaugural NZAF fellow in the school of population health at Auckland University. “All of those new tools means we can really start to squeeze HIV transmission and stop it circulating in our community.”

The challenge ahead is scaling the response to ensure “comprehensive” prevention reaches “small pockets of unmet need”, otherwise communities such as takatāpui, Pasifika, immigrants and MSM living in rural towns or away from the major urban centres are at risk of being left behind, Saxton says. “We know in Aotearoa that not everyone has access to good clinical care and it’s patterned by inequities.” Keeping the response connected to the communities most affected by the virus “requires organisations to be seen to be peer-led and of [the] community.”

NZAF may have a new name in tribute to the legacy that Bruce Burnett and countless of his peers left behind. But preventing HIV/Aids will remain at the Burnett Foundation’s core, says Rich, its new CEO. “We’re not going away.”