Instagram was once a place for holiday snaps and influencers’ brunch pics. These days, accounts galore are dedicated to drug dealing – and they’re advertising to the masses.

Dealing drugs online is not new. The dark web has been a hive of illicit content for years: hosting child pornography, as a marketplace for illegal drugs, and just as a place to disconnect from the mainstream.

But it takes a little technical know-how to dial in, some work to buy the cryptocurrencies and a bit of effort to find a faceless drug dealer. These days, you can simply log on to Instagram and be invited to make a purchase.

I discovered this directly, while mindlessly swiping through Instagram stories. Up popped up a sponsored advertisement that looked a little different from the others. There on my screen was an advertisement from the account de_coke231, with a picture of a large rock of cocaine and contact details for purchase.

But there’s no doubt a lot of people are looking to use the platform as a drug marketplace. In the last three months of 2020, 1.4 million pieces of drug-related content were removed, 96% of it being deleted before it was viewed or user-reported to the company, an Instagram spokesperson said.

But that leaves more than 50,000 posts that slipped past the filters. And it doesn’t account for the posts that might never be detected, or reported, at all.

I put a call out to my 600-something followers to see if anyone in my friend group had seen drugs being sold on the platform. By the end of the day, I had a handful of accounts purportedly selling drugs.

But first I decided to contact the seller whose ad had got past the automated system. Using their encrypted messenger username, I shot off a message asking for a price list to clarify their occupation. The sponsored post and the writer’s response to it

I’m no online buyer of drugs, but the chances of me forking over the $6,950 asking price for 20 grams of cocaine via untraceable bitcoin is very slim. I explained I was a journalist and wanted to hear more about selling drugs on social media. He wasn’t having it. I gave him a day and got back to him. I got in touch with some of the other accounts friends had sent me.

The first I spoke to was John*. He said he was from the United States. He deals cocaine, crack and MDMA. He was sporting a brand-spanking-new Instagram account, no picture and had a dodgy website link in his bio. We spoke via Wickr Me, an encrypted app for messaging.

Me: Hey man, I’m writing an article on selling drugs online. I’ve written for Vice and a few other places. Seems pretty genius to be selling on IG. Would you be down to talk about your work?

Me: Awesome thank you. I’m really keen to know why you decided to market stuff on IG. Why did you go there?

Seller: IG just like most social media sites is a market place for a variety of products and you can find communities of everything, drugs included.

Me: Yeah and I guess it’s super easy and low risk making an account. Do they get shut down often?

Seller: Accounts get shut often and it’s low risk in that you can hardly be traced.

Me: How did you get into selling in the first place? It would be nice to add a personal aspect rather than just a story on drugs.

Seller: I was born and raised in Baltimore and got in contact with a lot of users as a child. Coming from a poor family and the absence of my parents got me adopted to the streets. I got introduced to a local drug lord and started pushing weed when I was like 14yrs. As time went I was able to save some of my money and before 20 had gone solo. Went into the dark web and the rest is history.

Me: Oh wow, I’m writing to you from all the way down in New Zealand. Do you send drugs around the world or just the US?

Seller: Pretty much worldwide just a bit difficult in some places especially the middle east.

Me: Thanks for the info man, it’s super interesting.

That’s right, I shamelessly plugged my brief stint writing for Vice. Drug dealers love it. I figured it was a better punt than an independent local site from New Zealand. Anyway. My chat with John felt weak and the story wasn’t complete. 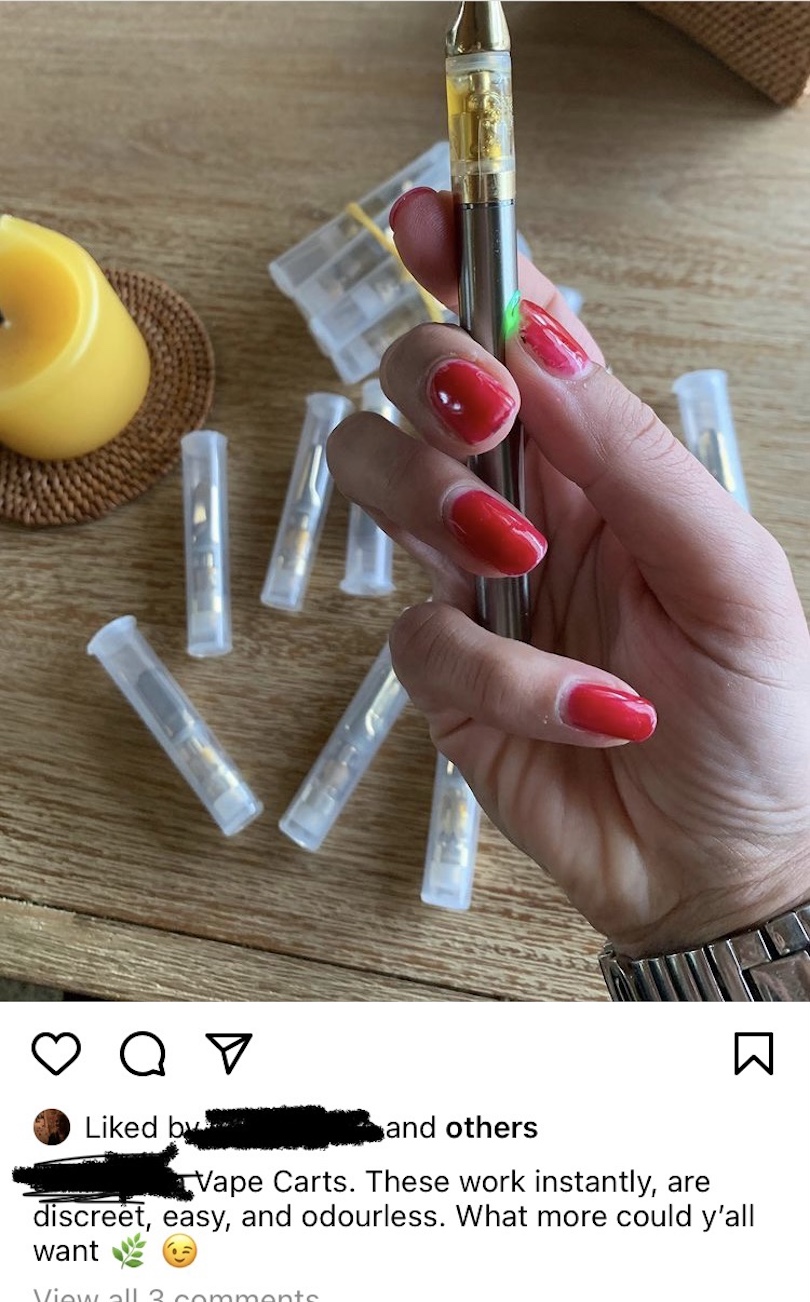 That’s when a friend passed on details for Julia*, who deals from her personal account here in New Zealand. She sells weed chocolate, CBD products, vape pens and oils.

Rather than a faceless dealer, she described herself as an activist. An advocate who would advise and sell marijuana. All through Instagram.

Julia had been through the New Zealand health system and came out more broken than fixed, she said. Marijuana had helped. We spoke for almost an hour on the phone about her story and how she came to start medicating others. “I understand what it feels like to suffer,” she said.

Julia has dealt with health issues for years. She was given round after round of medication that depressed her and took away her energy, while her health continued to deteriorate, she told me.

For Julia, cannabis helped where the solutions put to her didn’t. After she recovered, people began to ask her for advice. And for product.

Selling on Instagram made sense because that’s where her community is, Julia said. She was aware of the risks. “It’s at the back of my mind, you know, I’m cautious about the things I post.”

But, she said, “I don’t want to be controlled by fear. I try not to overthink things too much, but at the same time, I know if they wanted to make an example of me then I know they could.”

Instead of selling straight weed, Julia specialises in edibles, CBD products and vape pens. “I don’t want a criminal record and [to have to] deal with the justice system. But at the same time, it’s not fair that people like me are being made to feel like criminals. The criminals are the ones that prosecute people for minor offences, potentially ruining their lives given them a record for the rest of their lives,” she said.

If drugs are accessible to anyone with an internet connection, and increasingly, anyone with a social media account, is it time for a rethink of our drug laws?

While the referendum on legalising cannabis was narrowly defeated at the last election, that should not be taken as an edict to do nothing, said NZ Drug Foundation executive director Sarah Helm. The Green Party MP and yes campaigner Chlöe Swarbrick thinks politicians and policies are always one step behind the tech.

“What we see time and again is politicians chasing technological innovation,” she said.

“The Misuse of Drugs Act 1975 was created at a point and time when we didn’t have the internet, let alone the dark web, and you’ve seen all sorts of troubles arise with the grappling of synthetic substances in particular.”

Online as offline, a punitive response only exacerbated the problem, she said. “If we are seeking to remove these people from these platforms then we end up with another massive problem, which is pushing people further and further underground where there aren’t safety measures in place.”