The temporary halt on travel from India to New Zealand is unprecedented. But so is the state of Covid-19 in India, writes Siouxsie Wiles.

As of Sunday, April 11, travellers from India are prohibited from entering Aotearoa New Zealand. The ban is temporary and due to be lifted at the end of April. It’s the first time New Zealand has stopped citizens or residents from returning during this pandemic. So why haven’t we imposed this on other countries or earlier in the pandemic?

What’s going on in India with Covid-19?

According to the Johns Hopkins Covid Tracker, India is third behind the US and Brazil for number of confirmed Covid-19 cases, with over 13 million since the pandemic began. Worryingly, they are currently experiencing the highest number of confirmed new daily cases anywhere in the world. Because of India’s vast population – at 1.38 billion people they make up almost one in five of the world population – case numbers are still relatively low on a per capita basis, but the increase over the last month has been a near vertical line. That rise is largely driven by an increase in cases in the western peninsular state of Maharashtra. Maharashtra is the second most populous state in India and home to the city of Mumbai, considered to be the financial, commercial, and entertainment capital of India. The state is already under a weekend curfew, but it sounds like more restrictions may be on the way. 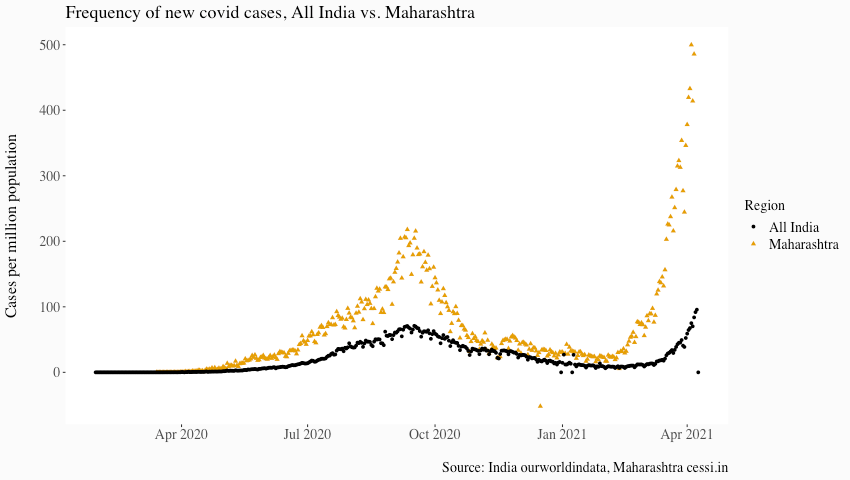 What’s driving the increase in cases in India?

Genomic sequencing has been slow to get off the ground in India but in December the Indian SARS-CoV-2 Consortium on Genomics (INSACOG) was established. The consortium’s goal is to sequence 5% of all positive test samples in India. That will help to track the spread of the more infectious variants as well as pickup any potentially new variants of concern. To date, the consortium has only sequenced a fraction of that 5%, in part because of difficulties with getting samples but also because the government has put restrictions in place that stop government labs being able to buy plastics and reagents from outside of India.

According to a recent statement, INSACOG has sequenced just over 10,000 positive samples and amongst them identified 771 known variants of concern. Just over 30 was the B.1.351 variant first identified in South Africa, and one sample was of the P.1 variant first identified in Brazil. The overwhelming majority though, were the more infectious B1.1.7. variant first identified in the UK. Evidence is building that not only is B.1.1.7 more infectious, it also results in more severe illness. A recent UK study of low-risk patients found that people infected with B.1.1.7 were between 32% and 104% more likely to die than people infected with the older variants of the virus. INSACOG also found a worrying new variant in 15-20% of the samples they sequenced from Maharashtra. It has the E484Q and L452R mutations that have already been shown to increase the ability of the virus to bind to host cells and to escape from antibodies.

From India to New Zealand

The recent exponential rise in India’s daily Covid-19 mirrors the proportion of people returning to New Zealand from India testing positive for the virus. From the data provided in the Ministry of Health’s briefings, over the last month, there have been about 150 people test positive for Covid-19 in managed isolation and quarantine (MIQ). More than 100 of these have arrived from India. 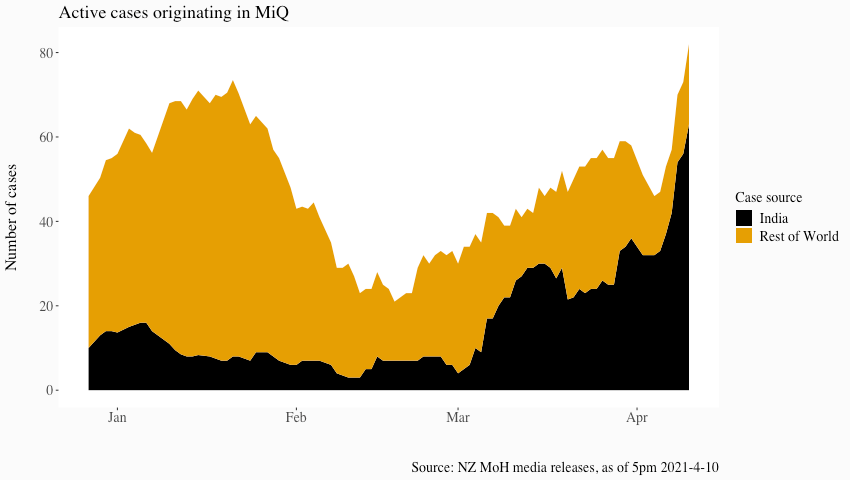 I can see how this increase in cases will be alarming our government and those working on our pandemic response. India’s current exponential rise in cases reflects transmission of the virus over the last one to two weeks. That means we can expect India’s daily cases to continue to rise for the next few weeks even if they impose a strict lockdown now. Here the concern will be whether we have the capacity to adequately isolate and care for the increasing numbers of people we can expect to arrive incubating the virus.

One of the questions people will probably be asking is why we didn’t impose similar restrictions when the UK and US were experiencing their big waves back in January. After all, at its peak, the US was experiencing about 250,000 new cases a day, well above what India is currently experiencing. One of the measures we can use to compare travellers coming from different countries is the positivity rate. This is the percentage of people who arrive and then test positive for the virus.

According to the provisional travel data from StatsNZ, at the beginning of the year more people were returning to New Zealand from the US and UK than from India. Despite this, the positivity rate for all three countries was around 5% and within our quarantine capacity. Since then, the positivity rate for travellers from the UK and US has dropped, but from India it’s been rising and is now at over 10%. As India’s case count continues to rise exponentially, it’s not unreasonable to think imagine that the positivity rate will also continue to increase. Given we normally have several hundred people arriving from India every week, this is how we could end up overwhelming our current capacity to isolate and care for everyone arriving with the virus. But what about pre-departure testing?

I’ve always been fairly vocal in my view that the 72-hour pre-departure test isn’t the defence people seem to think it is. As I’ve explained before, a negative PCR test is just an indication that at that point in time someone doesn’t have sufficient levels of the virus to be detected. They could easily be within the incubation period or become infected in the time between being tested and getting on their plane. Not to mention at various points on their travels, especially when that travel takes in multiple stops like it does from India.

Could it be that the requirement for a pre-departure test may be why some of our returnees have caught Covid-19? Was going to get tested where they were exposed to the virus? I hope health officials are talking to recent returnees to see if this might be the case.

While the government grapples with how to allow people to return safely, I don’t think we should be yelling at our diaspora that they should have come home sooner. Citizens and permanent residents have the right to return to New Zealand. It isn’t a trivial matter to move your life from one country to another even when there isn’t a pandemic. I’m sure most people didn’t anticipate that more than a year down the track things would be so out of control. If only more countries had chosen to take the elimination path. Then we wouldn’t be in this mess.

Thanks to Mike Plank (@MichaelPlankNZ) and David Hood (@ThoughtfulNZ) for wrangling the numbers and providing the graphs.