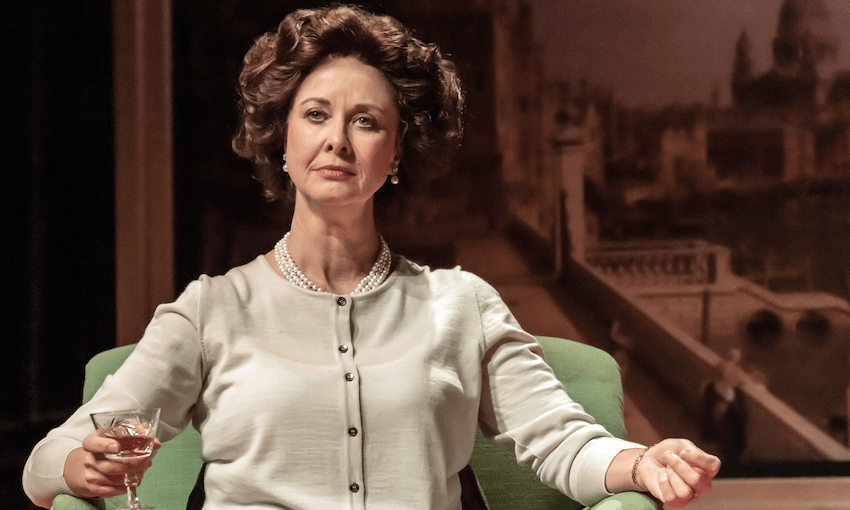 Review: The Audience is a missed opportunity on almost every level

Much like its subject, The Audience is blandly pleasant and frustratingly naive. Sam Brooks reviews Auckland Theatre Company’s latest production.

Every week, Queen Elizabeth II has an hour-long meeting with her prime minister to discuss the matters of the day. This has happened since her coronation in 1953, and will happen until she abdicates, she dies, or the inevitable heat death of the universe, whichever comes first. All these meetings are unsupervised, off-the-record and, to some people, the source of much interest and scrutiny. These weekly meetings are the basis for The Audience, written by Peter Morgan, currently being staged by the Auckland Theatre Company.

The appeal of The Audience is simple: it gives the public a peek behind closed doors, and if there’s one thing people love more than a real-life story, it’s a story that might have happened. The structure of the play is also simple: a series of two-handers between the Queen and whomever happens to be prime minister, and even though Morgan shuffles up the order of scenes, it’s never difficult to follow and remains anodynely intimate. Ultimately, it’s a one-stop performance showcase, and that’s where the The Audience‘s primary pleasure can be found.

That’s because The Audience lays itself at the feet of whomever might be playing Queen Elizabeth II. In the premiere West End season, it was Helen Mirren, doing what felt like a state-appointed victory lap of her an Academy Award-winning performance in Morgan’s film The Queen. Here, we’ve got Theresa Healey. She has an uphill battle, especially compared to Mirren, who was coming off the inherent goodwill of, you know, everybody having already seen her and loved the original performance. To Healey’s credit, it’s an absolute triumph against adversity.

As a writer, Peter Morgan has a tendency to walk the line between depicting politics and engaging with politics. Even his previous play, Frost/Nixon, seemed less interested in the ramifications of Nixon’s actions and more interested in divining humanity in America’s second-most reviled president. As such, despite Morgan’s skill with a bon mot and his ability to give insight into people who exist mostly as headlines, his work can seem more like fanfiction than theatre. And even if it’s meant to be journalistic observation, he’s more the Daily Mail than the Guardian.

Morgan’s approach works especially poorly in The Audience, which sits at an awkward mid-point between The Queen and The Crown, which, yes, Morgan also created. While The Queen attempted to lionise Elizabeth II’s actions during what was deemed the monarchy’s roughest days, and The Crown attempts to humanise Elizabeth II full stop, The Audience tries to canonise Elizabeth the monarch. She’s presented as a fount of wit, a political heavyweight, a woman of tremendous compassion, all at the same time.

Which is why Healey’s performance is such a triumph. She makes the headline into a human being, the image into flesh, by force of commitment. In a way, she surpasses Mirren’s work. When you watch Mirren as the Queen, there’s a sense of stuntiness to it – she’s always Helen Mirren-as-Elizabeth. Healey, despite her charisma, sinks fully into the role. The transformation between ages is entirely seamless, and when the scenes lack an emotional anchor, she provides one. Morgan’s script obfuscates whatever arc the Queen might have had by shifting the chronology of the meetings, flitting from John Major to Gordon Brown, but Healey manages to tell the story of a woman moving from insecurity to dominance to wearied disappointment.

The production as a whole doesn’t help its star. The ensemble of prime ministers is lively and vivid, particularly an especially crustacean Ian Mune as Winston Churchill, and all stamp their mark on their specific PMs. But the design is oddly static. The most damaging aspect is the decision to keep all Elizabeth’s transformations offstage; it cuts any potential momentum the play might have dead in its tracks, and robs Healey of vital connecting tissue between the stages of Elizabeth’s life.

There’s room for a production to have fun with what the shuffled chronology of the play means – when is Elizabeth remembering? What is she reliving? When is she actually in the moment? – but Colin McColl’s production keeps it shockingly literal. Given that this is a play largely full of two-handers with the characters sitting down and talking, it’s a crucial missed opportunity to inject some theatre magic into a production that sorely needs it. Hell, in a space like the ASB Waterfront Theatre, it makes little sense to see a production of this scale that doesn’t utilise what magic the space is actually capable of.

Which brings me to the question that sits underneath the shaky foundations of the production: Why The Audience, why here, and why now?

It seems willfully naive to programme a play like The Audience, which features arguably the most famous woman in the world and the current face of the world’s most famous colonising power, in our current climate. But to programme this show in New Zealand, a country which is still feeling the daily damage of colonisation, and to give it the most traditional, conservative production that doesn’t begin to address the world sitting just outside the theatre door, seems like both a display of ignorance and, yes, another missed opportunity.

At no point in The Audience does the play brush against any discussion of class, any discussion of race, barely any discussion of sex or gender – which is no surprise, given Morgan’s tendency to observe his subjects rather than engage with them. It’s important to note that The Audience premiered in 2013, pre-Brexit, pre-Trump, pre-whatever hellscape we’re living in now. Not that any of those events were the creation of racism, classism, sexism or social inequality, but these are global events that demand some kind of response, whether you want to respond to them or not. There’s no question that if The Audience premiered post-2016 it would have addressed Brexit and while I’m not sure if it would do so in any meaningful way, it would have been a start. The Auckland Theatre Company production of The Audience in 2019 feels like a museum piece. In no meaningful way is it different from what an Auckland Theatre Company production of The Audience in 2013 would be like, and that’s unfortunate.

There are any number of ways that you could shake up The Audience to make it relevant and responsive. Imagine a woman of colour playing Queen Elizabeth II. Imagine a person of colour playing any of the prime ministers, or any of the supporting characters. Imagine a cast with no men in it. Imagine an all-youth cast. Would it be historically accurate? No! But this is all fanfiction anyway – there’s no reason not to move the line between an acceptable fiction and an unacceptable one a few metres further down the field. I’m sure that there’s a bevvy of legal paperwork longer than the actual script that prevents decisions like that being made, and I’m equally sure that it would make the roast-on-a-Sunday members of the audience furious, but if our leading theatre company isn’t going to make a show that responds to the world outside its door, then who is?

You can only go so far down this road before you realise that the destination that you have in mind is not, actually, what the play is setting out to do. You can queer it, you can colour it, you can shake it up as much as you want, but Peter Morgan’s The Audience is never going to be a show that meaningfully interrogates its subject, or its subject’s place in the world. You can’t pay for a Big Mac, expecting it to be a salad. No amount of shaking up would change the lack of incident in the play, or infuse it with meaningful political critique or commentary, but it might give the production a point of view and a purpose that it doesn’t.

The Audience is a cynical, if understandable programming choice for Auckland Theatre Company, nestled in the schedule between its energising, exciting Here & Now youth programme and a collaboration with Prayas Theatre, A Fine Balance. It’s a soft lob down the middle – a crowd-pleaser about a famous person, one that comes with borrowed four star reviews and awards overseas – and one that seems primed to please ATC’s subscriber base. For all the humanity and life that Healey lends the production, not even she can take it over the line into making it necessary, or even justifying its existence. And, for our leading theatre company, that’s simply not enough.