Beginning today, The Spinoff kicks off a weekly round-up of data tracking the effects and response of Covid-19 around the world – and how New Zealand stacks up.

This data and the visualisations of it are both drawn from Our World in Data’s work on the Covid-19 pandemic, which is freely available for re-use. Not all data is complete: measurement techniques vary between countries and sometimes within them.

The countries we’ve chosen to compare are New Zealand, Australia, the US, the UK, South Korea, Sweden, and Singapore. Where possible, we’ve included China and Taiwan; there is less data available from these countries so it can’t always be included.

Deaths per million as a rolling seven-day average The graph appears to show that, for the majority of countries chosen, daily deaths attributed to Covid-19 are decreasing. While Singapore, New Zealand, South Korea, Australia, Taiwan and China all have a rolling average of fewer than one death per million people, Sweden and the UK both have more than seven.

Sweden’s daily deaths aren’t decreasing so obviously. This could be due to its unique pandemic response; it chose not to heavily restrict the movements of its public. Dr Anders Tegnell, the Swedish epidemiologist driving this choice, has said the country’s approach is a long-term one; he theorises that if Covid-19 comes around again, Swedes will largely be immune. 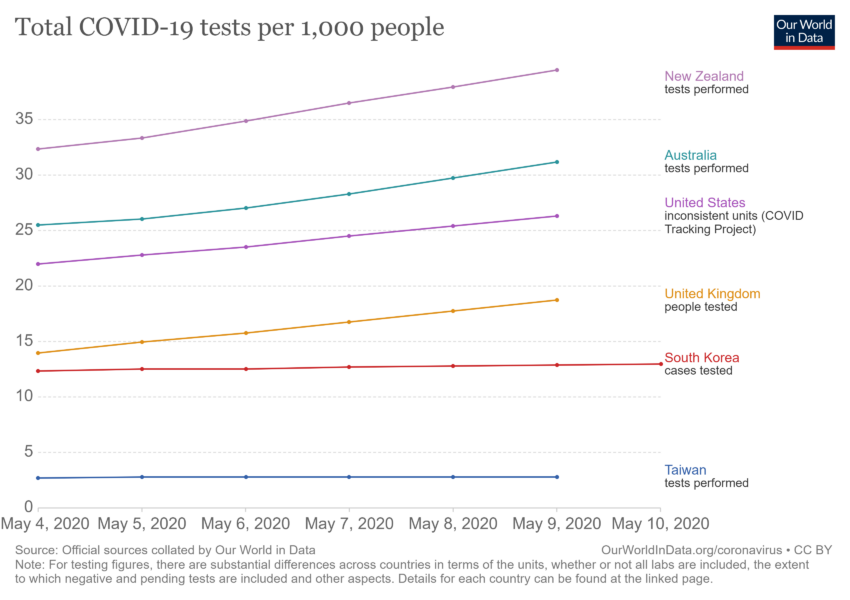 The most recent data available is from Sunday May 10th, so these numbers pertain to last week’s tests.

New Zealand tested almost 40 people per 1,000, and Australia just over 31. Both these countries have relatively low testing criteria; in New Zealand, our government has been encouraging testing for anyone with symptoms, no matter how bad. Clearly, we’re taking that message to heart.

Taiwan has the lowest testing rate, at 2.82 people per 1,000. It’s had a low testing rate for months now, after acting early to prevent the virus from entering and spreading in the country. It’s had a total of seven deaths from Covid-19.

The UK tested 18.71 people per 1,000, and the US tested 26.31. However, the US numbers are slightly inconsistent because they’re taken from the Covid Tracking Project, not the CDC.

How case numbers are increasing/decreasing by country We can see the curve is flattening, or at least beginning to, in most countries selected; but Singapore’s case numbers are still increasing. While initial efforts to stop the spread of Covid-19 in Singapore looked successful, the virus has spread rapidly among the city-state’s migrant workers, who live in densely packed dormitories. 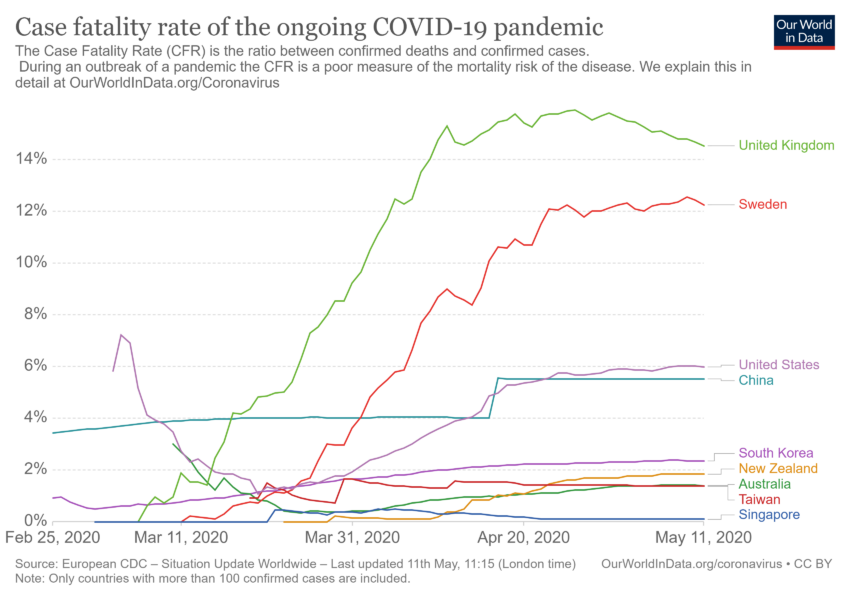 The case fatality rate is the number of people who have died compared to the total number of cases. For example, Singapore’s rate is only 0.09% because despite having 23,822 confirmed cases of Covid-19, the country has only seen 21 deaths associated with the virus. The UK has a case fatality rate of 14.53% because it has over 223,000 cases of Covid-19, and more than 32,000 deaths.

Sweden also has a high fatality rate, at 12.25%. Both Sweden and UK have had public health officials suggest herd immunity as an approach to combatting Covid-19. Herd immunity relies on the majority of a population becoming immune by either contracting Covid-19 and surviving, or being vaccinated. A vaccine for Covid-19 is not yet available.

There are many factors that affect case fatality rate, among them the country’s intensive care unit capacity for those worst affected and the general health of the population. Testing rates are also likely to affect it; wider testing means milder cases are picked up, and so the total number of cases vs deaths is higher. 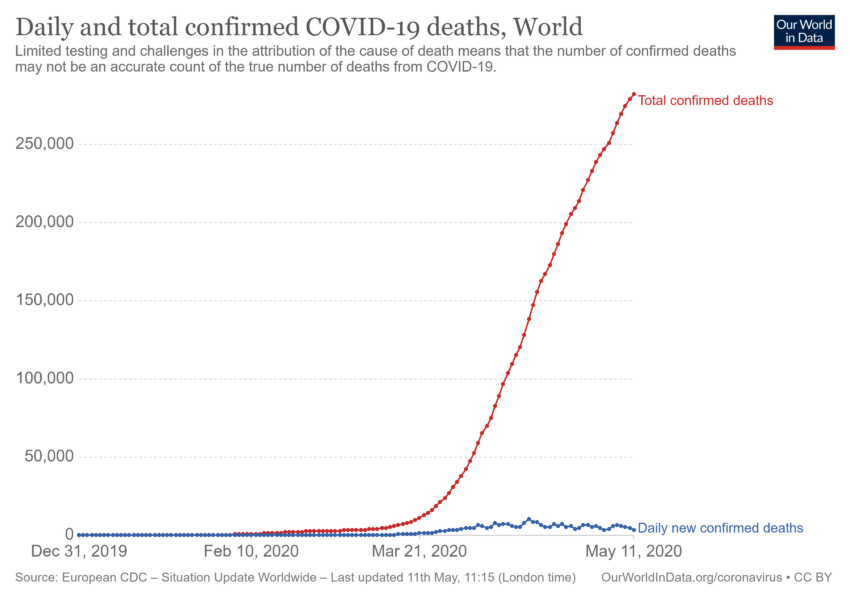 Here’s the bigger picture. The total deaths can only ever increase – they can’t decrease, because no-one’s coming back from the dead. The deaths per day have several spikes, which might continue for some time.

On Monday May 11th, the number of people who passed due to Covid-19 was 3,297. The last time it was lower than this was March 30th, at 3,129. The daily total has decreased fairly consistently over the past month from a height of over 5,000 deaths per day, but we’re yet to see if this trend will continue.

When, and how, will we know if the level three lockdown will need to go longer than seven days?

‘You don’t know their lives’: A call for empathy from The Aunties’ Jackie Clark

What’s new to Netflix NZ, Neon and other streaming services in March