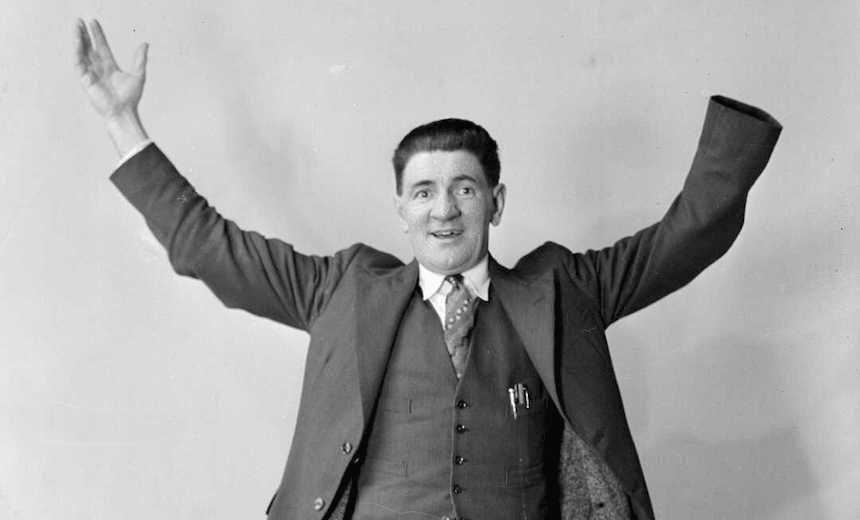 John Alexander Lee in 1936, while he was Labour Member of Parliament for Grey Lynn. Lee lost his left arm in World War I. (Photographed by S P Andrew Ltd.)

Restoring the house that Jack built: how the lessons of the past can help solve the housing crisis

John Alexander Lee in 1936, while he was Labour Member of Parliament for Grey Lynn. Lee lost his left arm in World War I. (Photographed by S P Andrew Ltd.)

Politicians John A. Lee and Norman Kirk used lessons drawn from their experience of poverty to create affordable housing, while John Key – despite famously being born in state housing – has overseen its demise. Oliver Chan argues that it’s time to restore the house that Jack built.

This is the story of three politicians: Jack, Norm and John. Shaped by their youth, each implemented their own concept of Kiwi housing. Think of it as a typical bungalow that Jack built during the 1930s, Norm renovated in the 1970s, and John flogged off to international property speculators for a hefty profit in the 2000s. Their stories explain how the current housing crisis was created, and offer a way out.

The story begins with Jack. During the 1930s generations born during the late-Victorian era, who had started life in urban slums and rural huts for itinerant labourers, embarked a bold rethink of housing. Leading the charge was one of their own, John A. Lee, commonly known during his heyday as ‘Jack’. Born into a Dunedin slum in 1891, the teenage Lee was convicted of petty theft and sentenced to Burnham Industrial School for young offenders. After he successfully escaped, Lee spent years on the run working as a swagman in farms, butcheries and factories – experiences that informed his political outlook: practical, bold and with a lifelong penchant for rebellion. After a year in Mt Eden Prison for bootlegging and theft, and service in World War I in which he lost his left arm, Lee was elected a Labour MP in 1922. Political rival Prime Minister Michael Joseph Savage refused to appoint the charismatic, popular radical to cabinet when Labour was elected to government in 1935, instead giving him the minor post of Parliamentary Undersecretary with responsibility for housing. Naturally, the Victorian survivor turned political gadfly had a plan.

Highlighting housing conditions during the Great Depression, Lee used his position to end the hardship endured by slum-dwellers, swagmen and the newly destitute alike. He proposed a large-scale state housing plan beyond what the cautious Savage deemed necessary, but the PM was ultimately convinced. With Government as the procurer of materials and land and Fletcher Construction as the monopoly builder, over 30,000 state houses were built between 1936 and 1949 housing the urban poor, middle class and eventually returning servicemen. Though the rebellious Lee eventually fell foul of Savage and was ultimately expelled from Labour in 1940, he deserves credit for affordable, accessible housing as a human right, with the state serving as a guarantor. The house was built.

Generations born in the early 20th century dreamed beyond basic rights, aspiring to own their own affordable home. Their dreams were encouraged by Norman Kirk, the prime minister from 1972 to 1974. A child of the Great Depression, Kirk had firsthand experience of the deprivation common among poorer families. A school dropout at 12, he worked as a train engine cleaner, chimney painter, ferry mechanic and factory worker in his youth. While better off than those from the Victorian slums, this generation often had to fight for good housing. Living in rat-infested workers accommodation at a Bay of Plenty factory in 1944, Kirk snapped one night when he killed a rat which attacked his infant son. He barged into a board meeting and threw down the newspaper-wrapped dead rat on the table, yelling “How would you like to live under these conditions?!” at aghast board members. Later, Kirk famously cycled his own building materials from Christchurch to Kaiapoi to construct the family home known as ‘The House that Norm Built.’

Kirk united his generation’s experiences of poverty with the views of idealistic baby boomers to create an aspirational vision of government and communities that were responsible for people’s basic needs so that individuals could make the choices he himself lacked. As Labour leader Kirk, immortalised voters’ needs as ‘Someone to love, somewhere to live, somewhere to work and something to hope for’ while acquiring the hippyish-endearing musical moniker ‘Big Norm.’ Coupled with health problems, Kirk’s fierce push to reinvigorate Lee’s housing rights concept (among an array of bigger reforms) hastened his death within two years. His legacy included mass state housing expansion, low-interest low-to-middle income loans, special savings accounts, better tenant rights and rent caps, and taxes on property speculation.

The success of Kirk’s programmes had a downside: many baby boomers began to take the opportunities provided by Lee and Kirk for granted, believing they owed successes to merit alone. For them, housing was increasingly seen less as a human right, and more of an opportunity.

Abandoned by Key, Generation X’ers and Millennials need their own Lees and Kirks to end modern housing as a highly-profitable investment while also, like Lee, addressing broader generational hardships. The success of Chlöe Swarbrick is instructive: an unknown political novice, she ran for Auckland mayor against a former Minister of Education responsible for creating her university fees and student loan debt, and achieved 7% on a platform prioritising housing affordability. As with Kirk, our new political generation can learn from their predecessors while dealing with contemporary issues such as international property speculation. Despite Lee’s current pariah status in Labour, their Kiwibuild policy of bulk-buying materials and land for affordable private houses is a clear nod to their state housing pioneer. With boomer homeowners remaining largely oblivious to the housing crisis, it’s time for younger generations to restore the house of Jack and Norm to its former glory.