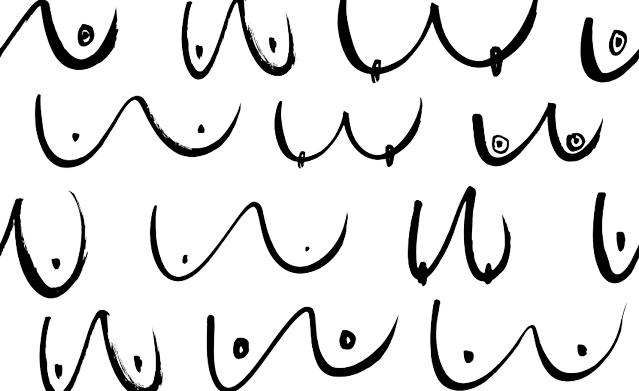 Sharon Lam reflects on a life with small breasts.

A spring afternoon in the mid 2000s. The changing room of a now long-gone Christchurch swimming pool is filling up with clouds of Cool Charm. Choking, I realise that everyone has started wearing bras. A bit rude but it’s fine, I think to myself, quickly putting my singlet and polo shirt back on. I guess I will get boobs soon too. At home, I look up in the trusted encyclopaedia of the 2000s, Yahoo! Answers, to see what the average age is for getting boobs. Someone writes 9-29 and I take this entirely wrong fact as gospel, accept the estimated delivery window. Years pass with no sign of delivery. I receive a period, acne, white hairs. But still no boobs. Now, as I drag myself and my flat chest towards 30, it is time to finally accept the fact that I have no boobs now and never will.

There was no one to turn to when I was growing up and at the peak of my boob desperation. My mum had huge boobs that she selfishly kept to her own genomic sequence, my friends had boobs that they selfishly did not graft onto my chest. Teachers had boobs, Countdown staff had boobs. Kim Possible had pointy boobs and Shego had round boobs. I became more obsessed with boobs than my straight male contemporaries. I found myself scientifically ogling my friends’ chests, seeing if they had grown since the last time I saw them. I’d Google teenage actors from the Disney Channel and Nickelodeon to see how old they were like a complete and absolute perv, hoping to be reassured that they were older than me, that I still had time. I looked for “boob growing” techniques and did the weird flapping motions as instructed. The only things that grew were useless nipples, on perhaps one extra cellular layer of epidermis.

It wasn’t until Paris Hilton became famous, seemingly overnight, that I saw some representation. I needed Paris. My biggest insecurity was my flat chest and therefore it overrode the desire for all other forms of representation. Yes, Lucy Liu is Asian, cool, but she also had nice full boobs, so I couldn’t relate. She may as well have been an old white man with five heads. But Paris became the first flat-chested sex symbol I knew. In a phenomenological smorgasbord of body issues and celebrity objectification, came relief. I ignored the fact that she was tall, knew how to apply makeup, had a completely different face structure. All that mattered to me was that she showed what was possible: you could be hot without boobs.

My boobs continued to not grow, but I did grow out of my obsession with them. My main anxiety was that even with Paris’s reassurance, no hot boys would want to make out with me. And if no hot boys wanted to make out with me, then what was I doing at university? Padded bras could only go so far. It would all fall apart when they went to milk the udders of the night, only to find two cornichons on a chopping board. But then, it happened. My hot fairy god-boy walked into The Cook, and with his tongue in my mouth, my anxieties disappeared as problematically as they had arrived.

These days, I don’t think about my boobs and the lack thereof very much. There are too many other dumb things to worry about and when my brain does have free time, it likes to spend it exclusively playing ‘5,6,7,8’ by Steps on repeat. Child labour aside, if I had had a full time job when I was 12 I never would have spent all that time worrying about having the smallest boobs in all of the South Island. The timing of puberty in human lives, while biologically sensical, is chronologically unfortunate. It’s a time before having a non-velcro wallet, before work visas, before a fifth quarter life crisis. Even for me, who had a very busy tweenhood with extra curriculars (all Neopets-related), understand that there is so little to preoccupy a tween. The mind is free to obsess and compare every foot, fold, and facet of the body.

Revisiting this obsession as an adult feels different. For so long, boobs had equalled adulthood. My boobs and I would drink martinis in V-neck dresses, seduce businessmen. Adulthood. Is it my lack of boobs that’s the reason why I barely feel like an adult, even as my neck creaks with each keyboard stroke? Would I think and feel more grown up, simply because I’d look more like a grown up instead of a 12 year old? Would I have grown into a different person if I had a B-cup? A C-cup? Surely a C-cup would be too much power.

On her own sans-boobs woes, the Nora Ephron wrote that “if I had them, I would have been a completely different person”. I think she was right. For one, I would have spent many fewer hours re-watching Nora Ephron movies at home alone and more time making out with a wider range of hot people. I may also have been harassed more, or I may have become the Queen of the World™. Would I feel less pressure to be skinny to keep things in relative proportion? Or is that simply impossible in a world of Blackpink music videos? All of which is to ask: would I be happier?

The general feeling these days is that body image acceptance is much better, at least in a Dove advertisement kind of way. Yet, big or small, I don’t know a single person who would not change something about their boobs if they could magically do so. Ephron ended her essay on breasts by calling out her friends with “nice big breasts” and their reassurances to her of how she was “insane to have been bothered”, that they “couldn’t sleep on their stomachs”, that it was “much worse for them”, that she “[didn’t] know how lucky” she was. Ephron rebuts and ends her essay by saying that they are full of shit. And I will do the same.

Listen to Breast Assured on Apple Podcasts, Spotify or your favourite podcast provider.