We’re entering a mystifying new world occupied by robot influencers, Bitcoin bros and racist artificial intelligence. Extremely Online, a new web series from Shit You Should Care About is here to help make sense of it all – starting with the weird social media phenomenon of robot influencer Lil Miquela. SYSCA’s Lucy Blakiston investigates. At first, it didn’t feel that weird. I get DMs like it all the time, and she looks like any other influencer. If we want to get technical here, I should say that she’s actually a computer-generated character who presents to the world as a robot. I know this is a bit of a mindfuck, but details (despite being in short supply) are important in the world of robot influencers. So bear with me.

With three million followers on Instagram, 341,000 monthly listeners on Spotify (did I mention she’s also a popstar?) and the prestige of having been named one of Time’s 25 Most Influential People on the Internet, Miquela is probably more successful than you or I will ever be.

AND AGAIN, SHE’S NOT REAL.

Welcome to the world of robot influencers, where any attempt to figure out your stance on the subject could result in a short-circuit.

Miquela is a creation of Brud – a transmedia studio that makes fictional characters who live in the real world. Essentially, she’s modelled on a person and then animated over the top, but when she’s talking to you and me, she believes she’s a robot.

You’re uncomfortable, you’ve got questions, I get it.

On the outside, she’s your average, everyday robot influencer, but she’s controlled by a random company who are also making a shit tonne of money from both her and from our attention.

And, since she’s not real, she’s attracted criticism for capitalising on experiences that she can’t have possibly lived through.

In 2019, she released a YouTube video detailing her experience with sexual assault in the back of a Lyft, which was later deleted after her (and Brud’s) motives were criticised.

Earlier that year, she shot a campaign for Calvin Klein where she kissed supermodel Bella Hadid and was accused by some of queer-baiting, while others took it as her “coming out” moment. 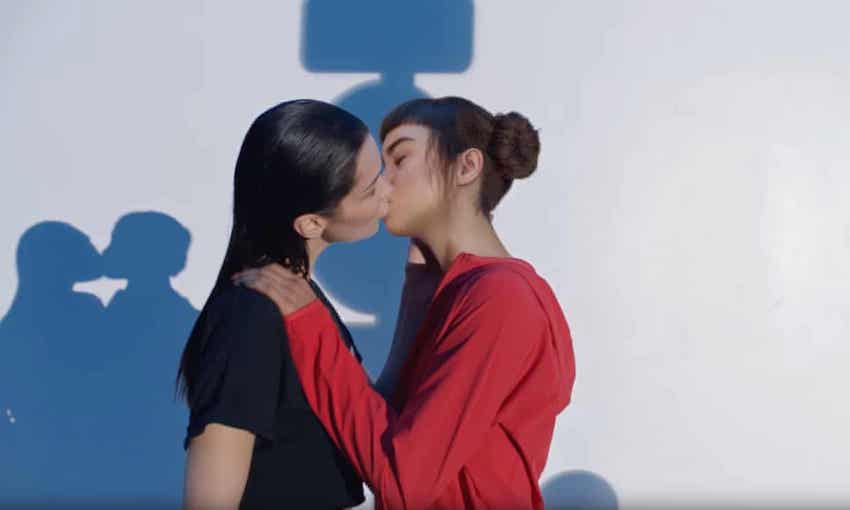 But are these examples that different from what we see in fictional characters that live in movies or books? She’s a character just like them, and she doesn’t pretend to be real. She just exists in the real world.

And who’s to say that those creating her haven’t lived these experiences?

The other beef people have with Miquela is that she’s “taking jobs away from real people”, which is a bit of a lazy complaint, but an easy one to land on. Again, I get it.

We’ve all heard that one day robots are going to completely take over and the world and Miquela – who doesn’t need to eat or sleep, won’t ever get sick and can be in a million places at once – is a non-living, non-breathing embodiment of this fear.

But allow me to counter this critique. Where Miquela might be taking a job away from one influencer, the money she earns keeps her developers, creators, marketers and other team members in jobs. So she actually funds a team of creatives, and often does this while raising money for causes her creators care about – which is more than we can say for a lot of other influencers.

It’s also probably worth noting that she’s signed to one of the worlds biggest talent agencies, CAA, who manage the likes of Harry Styles, Ariana Grande, Will Smith and even Joe Biden.

What is ‘real’ anyway?

Miquela’s “life” is the definition of unrealistic, because she’s literally an amalgamation of a perfectly selected bunch of pixels. But between Photoshop, Facetune, filters and all the other bullshit that exists these days to help us airbrush our online lives, Miquela’s façade really isn’t that different to any other influencer.

And maybe that’s the point.

Maybe this is all a big experiment to show us that none of what we see online is truly real. That being “real” online is an oxymoron.

If “realness” is measured on the presence someone has in your life then maybe you should start viewing your favourite influencer or celebrity as if they’re nothing more than a character living in your world. After all, you’ll probably only ever get as close to them as you will to Miquela.

So maybe it’s a good thing to turn on our front camera and reflect on our influencer and image-obsessed society.

Maybe robots are about to take over the world and soon I’ll be eating my Miquela-defending words.

Or maybe, like me, you now just wish you were a robot so you didn’t have to feel all these confusing human emotions right now.

Shit You Should Care About is a New Zealand based media company that help to make sense of the world by cutting through the bullshit to get to the good shit. You can watch new episodes of Extremely Online here every Friday and Mondays on The Spinoff. Made with the support of NZ On Air.