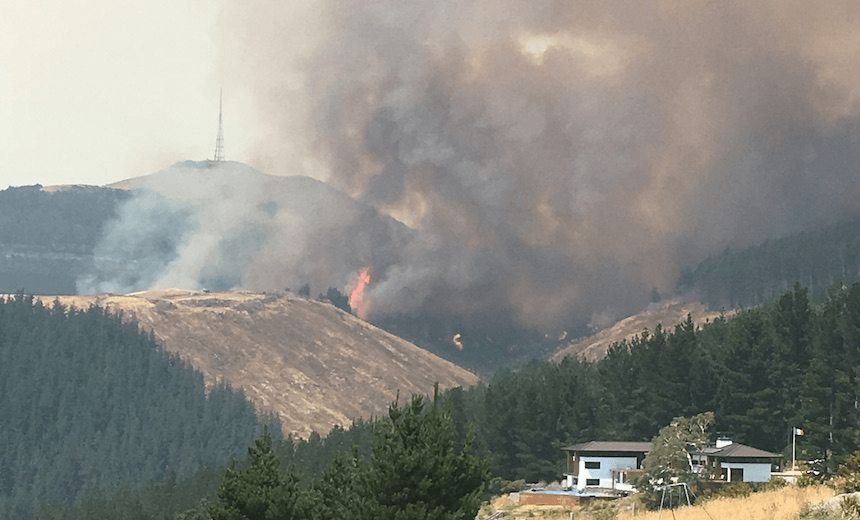 Fire in the Port Hills

Christchurch is operating under a state of emergency as wildfires rage on the Port Hills. The Spinoff intern Alice Webb-Liddall writes a personal account of watching smoke wreath the city.

Update, 8.45am: The fires that took hold in the Port Hills on Monday continue to burn this morning. Overnight the flames jumped Dyers Pass Road into Victoria Park and the fire now covers approximately 1850 hectares stretching south to Sugarloaf and Old Tai Tapu Road. 450 homes have been evacuated and many more residents of the Port Hills and Cashmere have self-evacuated; Stuff reports that up to eight houses have been destroyed. Today’s forecast for Christchurch is warm and dry.

The usual blue skies that accompany a summer’s day in Christchurch are hidden today somewhere behind a yellowed sheet of smoke. From my apartment in the middle of the city it’s all I can see. At this stage even satellites are picking up the ashy cloud pouring from the Port Hills. To say that Christchurch is a nerve-racking place to call home today is an understatement. Guides on tours that pass my building don’t stop today to drawl about the post-quake emptiness of the city, instead sitting in silence as tourists snap pictures of the growing cloud.

The looks on their faces aren’t just of wonder, but sadness and pity for a community that’s been through far too much in the last decade.

At lunchtime some friends of mine went up a hill to take pictures and gawk at the sheer mass of flame spewing grey smoke into the sky. By the time I got my shit together the police cordon had extended much further. We were ushered down a street that took us away from where we wanted to be. Chances of getting high up enough to capture any of the ground-level destruction were dwindling. We wanted to see more. Ignoring a shouted “you can’t go up there, bro!” from a pedestrian, we navigated through the streams of traffic to see how deep the cordons would let us.

We watched helplessly as people were evacuated from their homes. Some whose houses survived the two big quakes will have lost them today. I’m confronted by a hushed chatter as we get closer to the hills. People are out in hordes to get glimpses of the chaos and among those walking towards the smoke and fire, the occasional car packed with luggage drives away from it. A reminder of the families unsure whether they’ll see their houses and possessions again.

We found a small area to perch where we could see the amber glow through the thick smoke and trees. A small crowd had gathered on the same patch of hill, speckled with the presence of police officers. People watched with amazed gasps and cheers when flame erupted from exploding power lines and falling trees. It was like a strange circus act.

A man next to us explained to a disinterested cop that just a piece of glass would be enough to start another fire in the dry grass around us. The crackle of flame that I usually associate with home and safety was, in this case, more of a horrible static, broken only by cracks and bursts and the crowd’s reactions. In the most horrible, terrifying, heart-breaking way, it was a spectacular sight.

A man lit a cigarette next to us and I couldn’t help but internalise the irony of smoking to relieve the stress of threat from this fire. The grief was mutual, shared between every citizen of Christchurch, and as a new resident, I felt the immense weight of this grief among the crowd. Police officers answered questions about the evacuations and the spread of the fire, and I could see the toll that this constant cycle of bad news was taking, not only on the curious and concerned public, but on the officers themselves.

With the darkening of night I can see bokeh glows pinpricking the hills, and hope, for the sake of the city and its residents that mother nature begins to show mercy to a region so harshly treated.