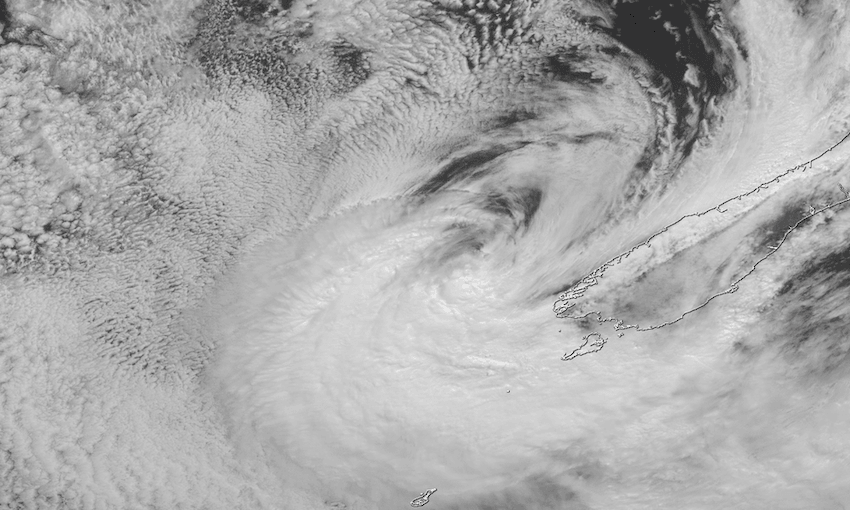 Ex-tropical cyclone Uesi is due to reach the west of the South Island this afternoon, bringing further pain to flood-hit Southland. Here’s what you need to know.

Ex-tropical, you say. What on earth does that mean?

A tropical cyclone, which is a low-pressure system that forms over warm waters in the tropics, bringing gale force winds and thunderstorms, becomes an ex-tropical cyclone once it moves away from the tropics and the warm air that fuelled it is replaced with cooler air.

Right, so it’s all over then? Nothing to worry about?

‘Fraid not. Uesi is still a powerful storm, and it’s currently approaching the southwest of the South Island. It’s coming from the northwest and temporarily strengthening, then is expected to cross over Fiordland, Westland, Otago and Southland from late today to early tomorrow while slowly weakening, says WeatherWatch. Philip Duncan of WeatherWatch says the technical change helps “unwind” the tightly packed centre of the storm. “The centre of the cyclone switches from a perfect circle to a more egg shaped low, while the tightly packed isobars around it spread out further.”

What can we expect?

There are heavy rain warnings in place for much of the west coast of the South Island (Buller, Westland, Fiordland and headwaters of the Otago lakes and rivers) and a strong wind warning in place for Fiordland. Weather Watch says rainfall totals of 100-150mm or more are expected in central-west districts of the South Island by Monday morning, and some flooding and slips are possible on the West Coast. Severe gale force winds exceeding 90km/h may hit exposed western coastal districts, with gusts of up to 110km/h predicted in the mountains. Uesi will also bring muggy temperatures. The worst of the weather is expected to hit mid-afternoon – ie right about now.

Nope. A state of emergency is still in place in Southland, where last week’s floods caused millions of dollars worth of damage and residents of the towns of Mataura, Wyndham, Gore and Balclutha were evacuated. Dozens of trampers were rescued from tracks in Fiordland cut off by torrential rain. Southland emergency management controller Bruce Halligan told RNZ today that contingency plans were in place for areas where stop banks were weakened in the flooding.

Will it make it up north to ease the drought?

Doesn’t look like it, sadly. There is, however, some potential relief in sight, with rain forecast for mid next week.

How often does this sort of thing happen?

South Pacific tropical cyclone season is from November to April – there are usually about 10 during this time, and on average one will affect New Zealand as an ex-tropical cyclone, most commonly in February or March, according to MetService’s Chris Noble. Climate change is expected to make tropical cyclones more severe in future, producing stronger winds and more intense rains.