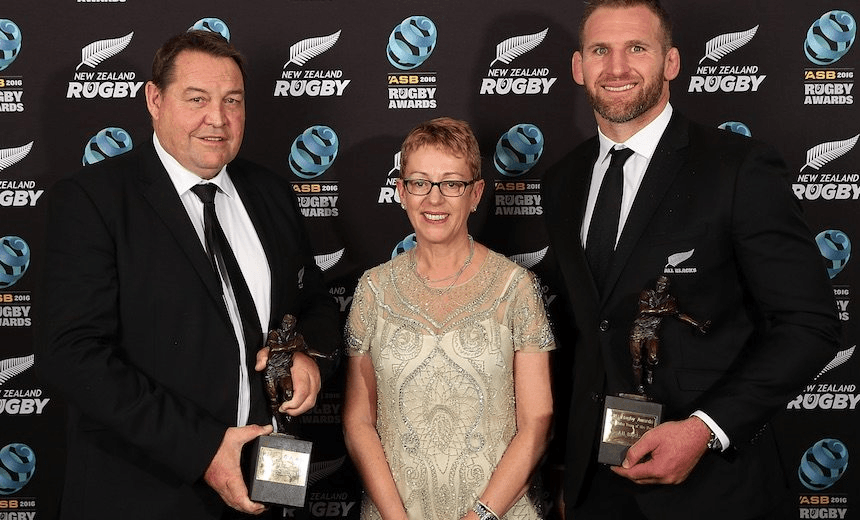 ‘I share in rugby’s joy, but despair at the controversy’: Barbara Chapman at the Rugby Awards

At last night’s NZ Rugby Awards, ASB chief executive Barbara Chapman electrified the room with a speech challenging the sport to reflect on the scandals of 2016 and do more to address diversity. Her speech is published below, following a note of introduction from Scotty Stevenson

Last night New Zealand Rugby honoured its best and brightest at its annual awards ceremony in Auckland. As usual, the sponsor of the event was afforded the chance to offer some introductory remarks. This year, that sponsor was ASB Bank and its CEO, Barbara Chapman, walked onto the stage and did something very few people in her position would do: She stood in front of a room ready to party, and challenged everyone in it to be better.

Her speech to the room was electrifying as much for its content as for the context in which it was delivered. Here on rugby’s night of nights was a naming rights sponsor prepared to say that the game her company has put its name to can do more to be inclusive and self-aware; that the game must take transformation seriously.

It was a powerful statement to make in a room packed with rugby’s most powerful names. On the day New Zealand Rugby appointed Dr Farah Palmer to its Board – the first female in the 124-year history of the organisation – here was another powerful, intelligent woman staunching up the joint like a total boss.

From the back of the venue you could see every woman in the room grow two inches taller. At the front, next to New Zealand Rugby CEO Steve Tew, sat Sarah Goss, the captain of the New Zealand Women’s Sevens team. At the table across the aisle: Fiao’o Fa’amausili, captain of the Blackferns. Tough as teak.

Everywhere, strong women: Portia Woodman, Kendra Cocksedge, Louisa Wall, Renee Wickliffe, Rebecca Mahoney, Niall Williams, Farah Palmer. All have represented their country on the rugby field. They were front and centre, not hidden away in the back corner table.

Selica Winiata, the women’s player of the year, sat on stage later that night after receiving her award, kicked her shoes off, and told everyone she hated wearing dresses.

Selica Winiata’s simple act of being publicly comfortable in her own skin was just as much of a statement as Chapman’s opening challenge. Taken together, however, they signified in unison that the game is changing. For its part, New Zealand Rugby, by giving Chapman the freedom to say what needed to be said – namely, there is so much good in this game, but let’s not pretend its perfect – on their big night, demonstrated it is willing to embrace that change.

There’s no doubt, this has been another hugely successful year for rugby in New Zealand, across all levels of the game.

But along with success on the field, over the past year the role of rugby, the conduct of rugby players and the importance of sport in the context of New Zealand society has been the subject of a great deal of media scrutiny and kitchen table debate.

I see this debate as a good thing.

Rugby, as well as being something we love, is a lightning rod for everything which is good, and a few things which are not good, about New Zealand. As a nation we feel that rugby represents us and we want to be proud of it. As a sponsor our team at ASB aligns with what is best about rugby, and we feel bad when that standard is not met.

And as a New Zealander, and a woman, I share with you the joys and highlights of the game but despair at the controversy which can engulf the sport we all love.

In many ways, rugby is a microcosm of New Zealand society; so much good and positive work is done by the rugby community and yet, just like New Zealand society as a whole, there is always more work to be done around building diversity and ensuring people from all backgrounds feel included and valued.

And because rugby is the lightning rod for this debate in New Zealand, as a New Zealander and a sponsor I applaud the work Brent Impey and Steve Tew and his team have done to critically review what good conduct and good governance means in sport, and how to set their bar higher.

I applaud the rugby union on the appointment of Dr Farah Palmer to their board after nearly 125 years of no women representation, and wish her well, but tonight – on behalf of the team at ASB and as the major sponsor of tonight’s event – our applause needs to go to all the outstanding men and women of New Zealand rugby who have, do and will continue to make us proud New Zealanders.

This is your night to celebrate. Thank you for letting us be part of it.