The Lifewise campaign for donations to keep open Merge Cafe, a haven for Karangahape Road’s homeless community, has hit its target. But criticisms have been levelled at the transparency of the appeal, and questions asked about whether the property trust also owned by the Methodist church could be picking up the tab.

Two weeks ago, Lifewise, a charity arm of the Methodist church that runs Auckland’s Merge Cafe, announced via its website and social media that after 11 years of operation, it would have to close the cafe’s doors unless $60,000 could be raised by the end of this month.

Under an “urgent call for help to keep Merge Cafe from closing”, a Facebook post quoted a regular saying, “If Merge Cafe shut down, everyone would be back on the streets. People might go back to addiction or violence. Some might just give up.”

The local community rallied in response – sharing the posts on social media, donating, and pleading for others to chip in. Their efforts worked. To date, $81,074.06 has been raised and on Friday, Lifewise announced via an email to donors that Merge Cafe will stay open.

However, some members of the Lifewise community have raised concerns about the tactics used to raise this money. They wholeheartedly support the Merge Cafe kaupapa and its contribution to the community, but question the stated urgency of the appeal and the transparency of the campaign. 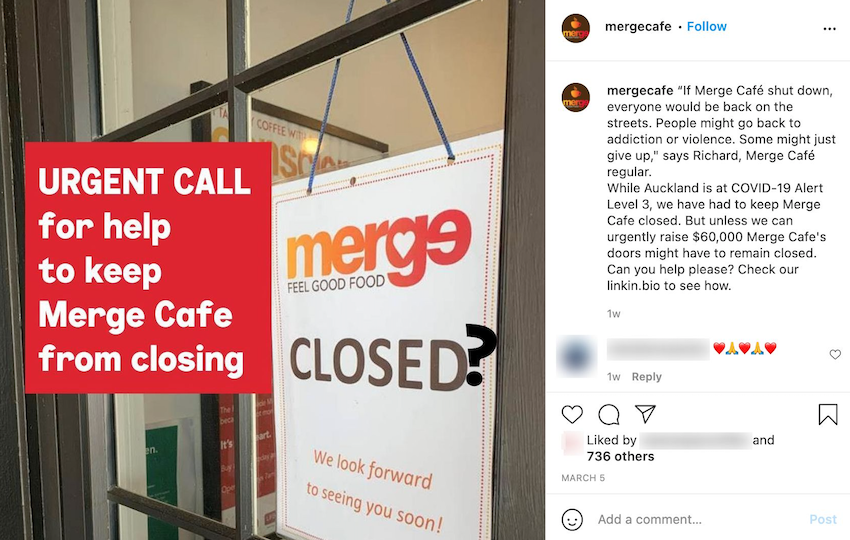 Lifewise CEO Jo Denvir told The Spinoff Merge was at risk of closing because it “lost a major grants funder last year because of Covid-19”. On top of this, she added, Lifewise’s annual Big Sleepout event, which usually raises around $200,000 for the organisation, didn’t take place in 2020 because of Covid-19 concerns. “Merge Cafe has consistently required philanthropy – external and internal – to keep its doors open,” said a Lifewise spokesperson.

Lockdowns and roadworks along Karangahape Road have meant fewer paying customers, so revenue is down and the “pay-it-forward” model the cafe relies on has seen a drop. According to Lifewise, Merge is making a $13,000 loss each month.

For over a decade, Merge Cafe has been a place where Auckland’s homeless can grab a hot plate of kai, a tea or coffee, charge their phone and have a chat with a peer support worker. Anyone who has visited the Karangahape Road cafe will know the aroha and pride that those who volunteer and work in the cafe bring.

One supporter, who has been donating to Lifewise and Merge Cafe for over four years, said it was a vital service for the local community. However, she felt Lifewise’s drive for donations was “confusing and problematic”.

Over the past couple of weeks, she has noticed questions from supporters on Merge Cafe’s Facebook page going unanswered. “There’s no transparency at all,” she said. “People are asking questions and they’re avoiding them.”

Denvir disputed the characterisation. “We have been responding to our donors’ queries on a case-by-case basis,” she said. 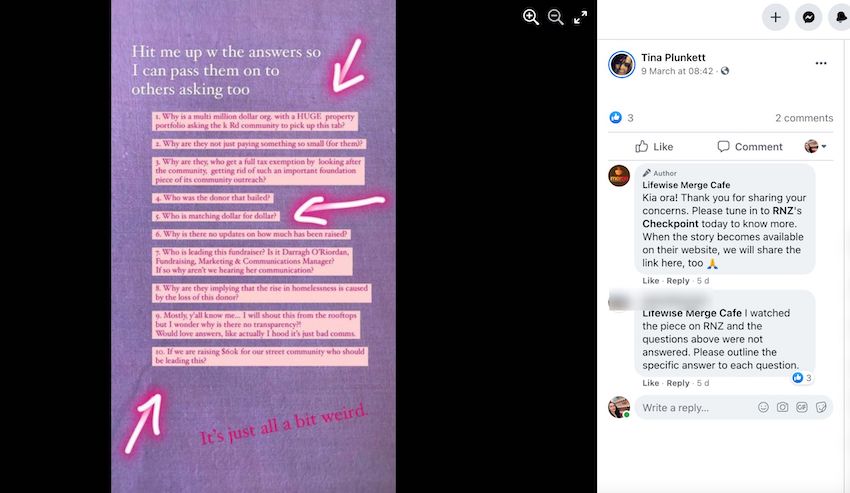 The supporter The Spinoff spoke to said an email sent to Lifewise staff via the staff intranet before the appeal for donations went public gave her the impression the appeal was more of a fundraising strategy than an authentic and urgent plea to keep the doors open.

An email sent to Lifewise staff via the staff intranet before the call for donations was announced (Screenshot: Supplied)

She said she believed Merge Cafe had been operating at a loss since it opened and was concerned that this drive for donations was a manipulative tactic, playing on the community’s fears, rather than a response to a sudden need for the cafe. “It feels really uncomfortable – the whole thing.” 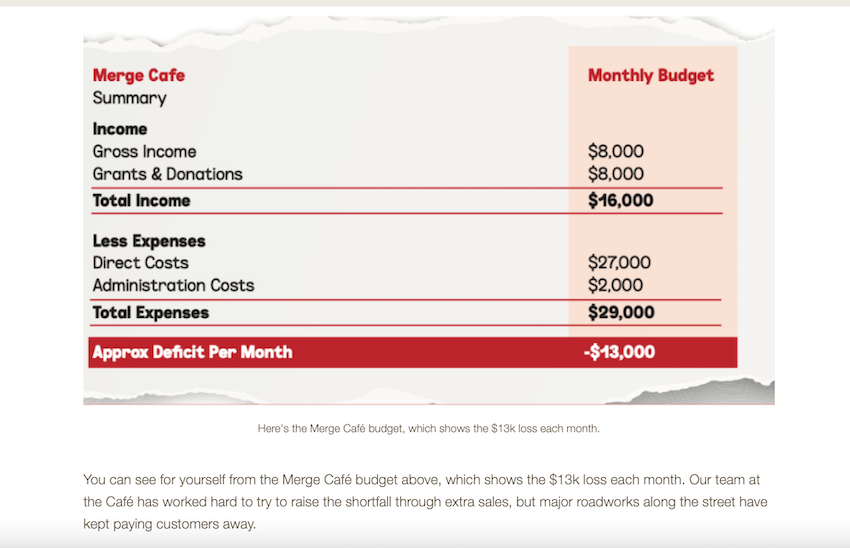 The Lifewise budget as it appears on its website. The Spinoff has sought a more detailed breakdown.

Rachel Scaife, programme manager for Haven, a support service run by the Odyssey charity, which rents a space in Merge Cafe, said staff were shocked when they heard the cafe may be closing. Prior to Lifewise’s public announcement, “we didn’t know anything about it”, she said, and Haven staff “spent the weekend worried about their jobs and their regulars”.

There had been no public update on donations received until last Friday, when donors were sent an email announcing the $60,000 target had been met. The cafe announced it had met the target on its Facebook on Monday. While the supporter wasn’t surprised by the amount that was raised, she said the absence of updates showed a lack of transparency. “I think they’ll drive away supporters,” she said. “It’s not within the spirit of the Merge community.”

There has been confusion, too, around a pledge Lifewise made on its website and in news coverage of the fundraiser – that any donations made by the end of the month would be doubled. However, Lifewise later said in a Facebook comment that only donations over $100 would be doubled. The Spinoff has spoken to one donor who was disappointed their $30 donation may not be matched as they had originally understood.

Denvir did not identify who exactly had promised to match donations, saying it was “a group of individuals from within the Methodist community”. She has now told The Spinoff that none of the donations will be doubled, given more than the target amount was raised. (March 23 update: Since the article was published, Lifewise has clarified that donations received up until the $60,000 mark was reached will be doubled.)

Denvir also declined to identify the “major grants funder” that had dropped out, nor how much their contribution had been, saying, “all we know is Covid had an effect”.

Another concern raised in relation to Lifewise’s fundraising drive is the asset-rich status of the church that runs it. The Lifewise Trust, Methodist Mission Northern and The Airedale Property Trust are all arms of the Methodist Church of New Zealand. The three trusts operate “interdependently in order to work towards one vision of connected, just, and inclusive communities”, according to Lifewise’s website. The Airedale Trust looks after the asset base of the three trusts “so that support to the community can be provided now and in the future”.

According to its 2020 financial statements, Airedale Property holds $22 million in cash assets, with $14 million in the bank.

A former Lifewise employee told The Spinoff he felt uncomfortable about Lifewise putting an urgent call out to the community when another arm of the church had significant assets. He said he was puzzled as to why the trust couldn’t spare $60,000 to keep Merge open, or use one of its properties to house the cafe so it didn’t have to pay rent to a private owner.

“There’s a critical need for the services they provide” at Merge, he said, but, he argued, there was an element of hypocrisy surrounding the organisations. While Lifewise deals with homelessness, its sibling trust is part of the property bubble that ultimately contributes to the homelessness for which Merge provides a safety net.

Denvir said that the property trust played an important role “as a social housing provider”, which “enables the Methodist Mission to look after beneficiaries for now and for the future”.

She added: “Merge Cafe is one of several services that Lifewise offers and has consistently required philanthropy (external and internal) to keep its doors open. Donations have been approximately $60,000 to $80,000 per annum, external philanthropy, $60,000 to $100,000. External philanthropic grants ran out mid-2020 as funders have had other priorities and we have been unable to replace these.”

A third factor that the concerned supporters point to is the strike action that Lifewise’s aged care workers have been taking since December. The workers are striking for better terms and conditions, such as increased sick and bereavement leave, and what they call “liveable” guaranteed hours.

A member of the Methodist church spoken to by The Spinoff said she found the Merge appeal “distasteful considering there’s been clear media coverage on what’s happening with homecare workers”. She said: “They can afford to bring in employment court lawyers to take on homecare workers, which wouldn’t be cheap.”

The tactics used in the call for donations also raised alarm bells, she said. “It might look like a plea – but it’s a deliberate, targeted campaign. As a Methodist born and raised, it’s embarrassing.”

Kirsty McCully, director of E tū, the union organising the strike, said she was “stunned by the way a church organisation is treating homecare workers”. It’s been a two-year process for the 85 striking Lifewise workers, with no progress so far, said McCully.

According to the union, Lifewise has backed down on terms previously agreed and threatened union members with three separate lockouts. “It’s the most aggressive approach in the sector I’ve ever come across,” said McCully.

Denvir responded by stressing that Lifewise Home Care services “are funded differently as part of a government contract”. She added in an email: “As mentioned above, Merge Cafe has consistently required philanthropy to keep its doors open. Regardless, Lifewise have maintained Merge Cafe staff/volunteers and have continued to pay them without government subsidies. (Subsidies were not sought due to Lifewise total contract income not falling below threshold.)”

Lifewise’s response to aged care workers and the appeal for donations for Merge Cafe form part of a cultural shift within the charity, the member of the Methodist church spoken to believes. In her opinion, the charity is becoming increasingly business oriented. “For those of us who are aware of the wider context in the community, it’s just not on.”