After months of lockdown, pubs in England were allowed to reopen this week, with outdoor seating only. New Zealander George Fenwick headed out to see how Londoners were welcoming the return of a cornerstone of British social life.

Trying to explain what life has been like in the UK for the past five months to people in Aotearoa is difficult. I don’t blame anyone for not understanding: this time last year, I would have had trouble imagining enduring lockdown for half a year, let alone doing it through the UK’s interminably grim winter. But then we did. I recently saw someone back home posting online about how lucky the UK is that our vaccination programme is going well, and I wanted to reach my waxy, sun-starved hands through the computer, shake them by the shoulders and invite them to look into my sunken eyes. “We’re getting vaccinated,” I’d admit, my voice a hoarse whisper after months of disuse. “But we’re all miserable.”

That is to say: it’s been nothing short of mentally excruciating. Now, as we emerge from our caves to find pubs open again as of April 12, the possibility of finally catching up with friends is a blissful relief after months of confinement. Mercifully, daylight saving has allowed us a couple of extra daylight hours – though you wouldn’t know it for the temperatures, which remain torturously in the single digits. Last April was unseasonably warm, which made the first lockdown somewhat bearable as we lay about in parks, thinking it would all be over by May. But right now it’s still freezing cold, which largely dulls any excitement I might normally have about the prospect of finally, finally socialising at the pub.

Even that begs the question: what if I’ve forgotten how to socialise? I’ve already forgotten how to speak: since March, I’ve been volunteering at a vaccination centre, and simple questions such as, “have you had a positive Covid test in the past 28 days?” or, “what is your date of birth?” have become insurmountable tongue-twisters. Last week, I asked a nonplussed elderly patient: “have you had a positive 28 days?” But nothing stops a Londoner from a trip to the pub, so a trip to the pub was in order. Because it’s fun to think of one’s life as a television show in which you are the main character, I decided to return to The Clapton Hart, the very same pub in which I had my last hurrah last October, and from which my bike was stolen that very same night. (I promise there was practicality in this decision too: they serve food and my boyfriend and I were hungry, and I thought we’d be guaranteed a table in their enormous garden). But whatever poetry I was trying to capture by returning to the scene of the crime was swiftly binned: when I asked if a table for two was available, the bartender looked at me as though I’d asked for his hand in marriage. “We’re all booked out,” he said. It was a Tuesday.

But such is the reality of post-lockdown London. Infuriatingly, fortune now favours the organised. A booking has become a golden ticket, and the days of spontaneously drifting into a pub like metal to a magnet are over. Some Londoners now have their social lives planned out months in advance, and those of us who aren’t the sharpest box in the spreadsheet are left scrambling. Sadly, pubs, once the epicentre of socialising on a whim in London, have become custodians of organised fun.

Thank goodness, then, for those that stand against such a preposterous trend, such as The Cellars, the pub right at the end of my street that is reserving tables for walk-ins only. After asking politely, we sat ourselves at a shared outdoor table next to two friends, Danielle and Frank, who were catching up for a drink. We started chatting. Danielle is from Yorkshire and Frank from Germany. They’ve both lived in London since the ’80s; they met while working at The Body Shop and have been friends ever since. They now both work as massage therapists. Neither lives locally to The Cellars, but they’re friends with the owner, who was Frank’s flatmate in his first-ever shared house in London. 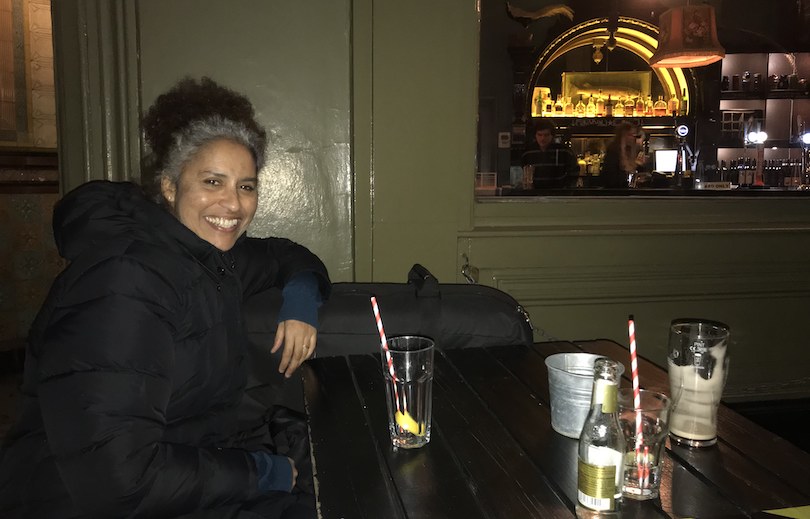 ‘It’s just nice to get out’ – Danielle enjoys a G&T at The Cellars (Photo: George Fenwick)

“It’s just nice to get out,” Danielle told us over a gin and tonic when I asked her how she felt about pubs reopening. She and Frank both remarked that this third lockdown had been the hardest due to its length, the short days and mercilessly cold temperatures. Danielle isn’t even much of a pub-goer usually, but she was excited to see her friends again. Frank agreed, but said socialising has become daunting, given that after months of lockdown there’s nothing to update your friends on. Gossip has dried up.

Sitting there in the freezing cold, talking to Danielle and Frank, I felt faint butterflies in my stomach as I noticed flickering signs of normality around me. I had an expensive beer in my hand. A bus drove past bearing a poster for the new TV show Mare of Easttown, the first billboard I’ve seen in a year that’s not at least nine months out of date. There was a hubbub of happy voices all around us, and, crucially, we were speaking to new people. The conversation with Danielle and Frank ricocheted with ease from topic to topic, and I was almost out of breath at the prospect of what we could cover. We asked about their friendship, families, work, neighbourhoods, what it was like when they first moved to London, how the city had changed over time. After months of staying confined to our bubble, we were suddenly witnesses to a whole other universe, one that was being passed back and forth between life-long friends over drinks, cigarettes and laughter.

Like everyone, I’ve missed my loved ones throughout the pandemic. I haven’t seen my family back home for a year and a half, and I haven’t even seen some close friends who live around the corner from me in months. But this slight easing of lockdown has reminded me of the strange way in which you miss people you don’t know. To have acquaintances, friends of friends, brief encounters at parties – heck, even to gossip about people you barely know – is to feel part of a community, a feeling which all but evaporated last March. I’m emerging on this side of lockdown with fewer friends than when I started, many having flown home and others whom I’ve lost touch with. But Tuesday night was a taste of what might be yet to come: more friends, more stories, more laughter.