The Spinoff launched a plan to bury a time capsule containing the epitome of this hell year before working out where we were going to plant the thing. Josie Adams was tasked with finding somewhere suitable.

So, you want to bury a time capsule. First, stop. Does the future need this? Historians in a century and large mutant rats in a millennium will not thank you for your Sistema full of face masks and dried up sourdough starter.

The Spinoff 2020 time capsule forges ahead in spite of this knowledge, because we are of unique and refined taste and also because we will line our capsule with silver and fossil fuels, making it immensely valuable come 2120.

We need a time capsule that can last through 100 years of climate crises. It needs to withstand periodic flooding, total submergence in both freshwater and saltwater, extreme heat, perhaps a lava flow from one of New Zealand’s many volcanoes, earthquakes, nuclear winter and nuclear detonations. Don’t think they won’t come for us. The billionaires’ underground network of bunkers is a global taunt, and we will suffer for it. I suggest this watertight stainless steel capsule (no vault required).

Most important is where we put it. If it can’t be found, or if it’s destroyed to make way for an apartment block, our descendants will never get to hear The Spinoff’s podcasts.

I approached Te Papa assuming the country’s greatest museum would also be its greatest time capsule. I was wrong. “I think there is a philosophical disjunct between what Te Papa does and what a time capsule does,” said CEO Courtney Johnston. The colossal squid wasn’t buried underground, it was put on display. Te Papa does not hide from the future. Johnston asked many questions and made me think a lot about history and how I will play no role in it.

“Who are you guys envisaging opening this in 100 years?” she asked. “Who are you putting that responsibility onto? Is it Duncan Greive’s children’s children?”

“So you’ve got this message for the future, how are you going to tell the future your message is there?”

“Is the point of this an exercise in storytelling, or is it genuinely about unearthing it?”

I was afraid to think about this. Johnston walked me back into an existential safe zone. “We all have to believe that we’re important and have some sort of meaning for the future,” she said. “I don’t think it’s arrogant to think people in 100 years will care, I think it’s optimistic, and God knows we need that!”

“Long story short, I don’t think Te Papa is the right venue for the time capsule.”

Hayden Donnell had a dream. He dreamed of Dave Dobbyn stepping into the ground beneath Huntly Henge, waving goodbye and looking up at the God his slow death would appease. I have no higher purpose in this world than to make Hayden’s dreams come true, but this was a real struggle. First, we couldn’t find Dobbo. Second, I could not find Huntly Henge. “It’s real,” said Hayden. He said “it’s real” three times, which is more times than he’s ever had to say God is real. He saw the henge on Moon TV.

A search of the Moonflix database did not turn up results for “Huntly Henge”, “Huntly”, or “henge”. I texted Moon TV star Leigh Hart, who told me the Huntly henge is not real, it’s just concrete remains he filmed himself in front of for a Sports Cafe story. I would like Leigh Hart’s mind to be uploaded to the internet so he can live forever as the ultimate New Zealand time capsule and improv comedian.

So we can’t put Dobbo in the capsule. What if he is the capsule? He’s not a big man, but there’s room for a slim briefcase inside his torso, if you took a kidney out. Even if he doesn’t live for 100 more years, his legacy will guarantee him a beautiful mausoleum, and our memories will live inside the skeleton of our greatest bard.

In the 1970s, 12 of these Futuro homes were built in Christchurch. We could move it around, and park it in successive Greive generations’ driveways. This one comes with a Marimekko couch. It cannot be ignored. This capsule must be opened. 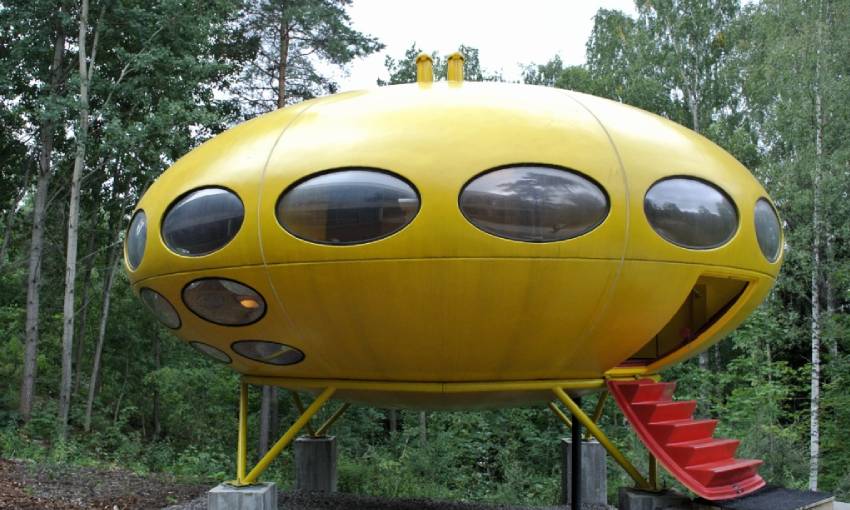 I dare you not to open one of these (Photo: Wikimedia Commons)

The obvious storage choice is a rock. We still have rocks that are over four billion years old. These rocks have survived the scorching Hadean temperatures and disgusting algae birthings of primordial Earth; they have survived the slapping of wet lungfish crawling to their terrible two-legged fates; they have survived world wars, natural disasters, and ska music. A good rock will easily last the next 100 years.

The Brookby quarry in Auckland has been mining greywacke since 1940, and reckons it’s got 140 years left. Leaving our rubbish in a gaping earthy wound is the perfect way to symbolise this generation’s rampant materialism.

Wellington City Council is the best council in the country. I say this because it responded quickly and usefully to my query about burying a time capsule in Shelly Bay. The Basin Reserve has the most emotional significance to 2020s New Zealanders, and there’s no doubt cricket will last for many more centuries, but we can’t bury a capsule there. There is a strong chance the Basin will be consumed by its ancestral lagoon.

The Mt Victoria lookout is the best option. In 2018 it was the site of a mysterious pasta dump, but in 2020 it has become a place for people to stretch their work-from-home legs and gaze out at our capital city’s monuments: the Beehive, the tides of shit, and the godforsaken public art. Our capsule can watch, too, and despair.

One of these monoliths will turn up in our country at some point, and we will repurpose it into a time capsule. Whether the creators of the monoliths are aliens, Elon Musk, or a marketing team for a currently unannounced 2001: A Space Odyssey television remake, if you leave a mysterious shiny pillar in the middle of the bush you forfeit your rights to it. 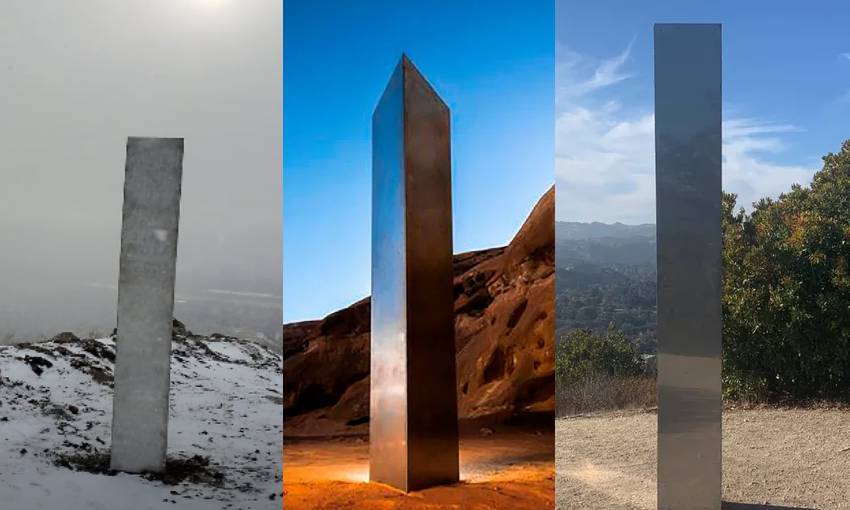 This is considered littering and I won’t stand for it

The series that led Elijah Wood to piss on a national treasure is not over! The Amazon Prime television show is currently being filmed in Kumeu, but Hobbiton will not die. It’s been almost 20 years since The Fellowship of the Ring, and the Matamata set is still thriving. These are real hobbit holes, just big enough for a time capsule and, say, Dave Dobbyn? I don’t know, just spitballing here.

Tunnel mining on the City Rail Link doesn’t start until April, but we can wait. It took almost a century to get plans for a city rail link off the ground, and when it is finally completed in another century we can celebrate by boring open the tunnel walls again to get our 2020 time capsule. The City Rail Link comms team had only one question when asked if we could do this. “What will you put inside the capsule?” they asked.

“So far the list is an Iko Iko statue of Ashley Bloomfield and a trinket from the prime minister’s office,” I said.

“Plus some CRL Collateral!” they said. I thank the sweet trainmen for their enthusiasm and cling to this railway capsule dream.

When I asked Tramco if they’d be open to hosting a time capsule in the Auckland Viaduct, they told me options are limited. “You can’t really ‘dig’ a hole anywhere in the Viaduct because it’s all original wharf turf around the waterfront,” was the response. “You could possibly hide it under a pop-up rubbish bin footing in Market Square?” 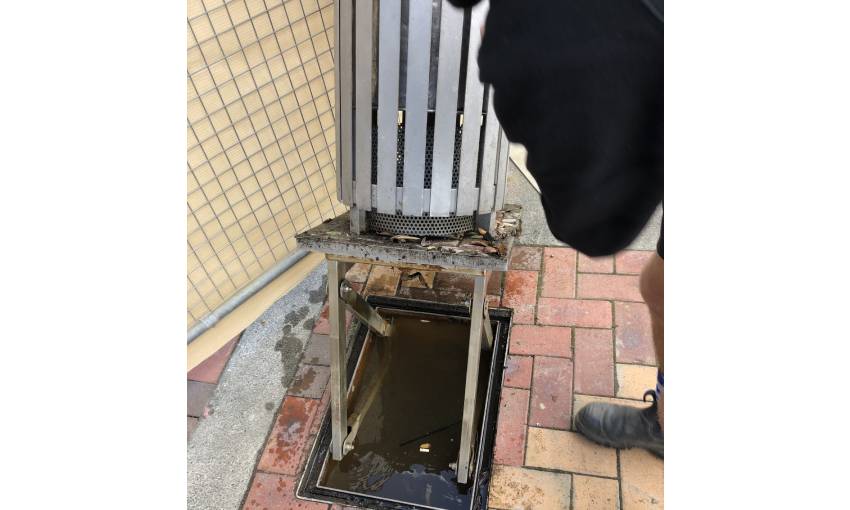 This was underselling it. This rubbish bin was once a secret cellsite, and it’s right next to Headquarters – the site of David Seymour’s 2020 election night party, when Act got its best result of all time. This is where I want the Spinoff 2020 time capsule to go. Our capsule will sit under a bin that has witnessed a moment in political history that will never be discussed again. It will watch the tides carry Leo Molloy’s body back to the depths whence it came. It will have rubbish poured on it, just as we’ve done the Earth. This is it.

Am I right? Am I wrong? Give us your thoughts, or alternative suggestions, at info@thespinoff.co.nz.

Want to know more about our time capsule project? Check out our previous stories here.