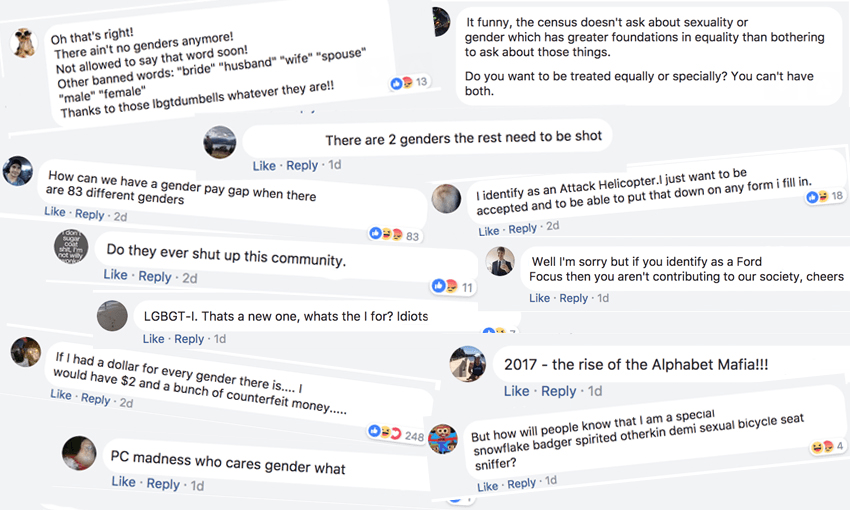 A smorgasboard of the Newshub commenters on Damien Light’s article.

Being measured means that you’re there: On the LGBTI+ community and the census

A smorgasboard of the Newshub commenters on Damien Light’s article.

Stats NZ will again not include any non-binary gender options or any questions about sexual orientation in this year’s census. That’s a government-endorsed insult to the LGBTI+ community, writes comedian Eli Matthewson.

Whenever the census comes around again I always think about one thing: The Christchurch Wizard. The legend I’ve heard is that every census he would take a row boat, row out to sea until he was outside of the country border, and return after the day so he would not have to complete it.

This year, Stats NZ has decided not to include gender options outside of male and female, nor any questions about sexual orientation. Newshub posted a response from ex-United Future Leader Damian Light, and the comments underneath left me wanting to get into a row boat, row outside the country border, and then keep rowing far away from this country.

The most prevailing opinion swirling around this comment pit is that this is yet another example of queer people wanting attention and wanting to feel special. As thought the sole reason we would ask for this is the thrill of getting to tick a box in a survey. Not quite.

The reason for wanting to include these questions is so far from feeling special – it’s for the practical results it can bring. We have no statistics that even approach being definitive for the number of LGBTI+ people in this country, but if we did that could seriously help the LGBTI+ community. It could help organisations secure more funding for queer support groups which are often criminally underfunded. Rainbow Youth, for instance, had their biggest ever single contribution not from the government, but from Tamati Coffey winning Dancing With the Stars in 2009. Better stats about how many young people this organisation can help could encourage the government to cha-cha along to the party.

Beyond that, the stats themselves would be affirming for queer people to see. To visibly see that there are more people like you in this country, that’s a nice thing. And to see queer stats that don’t show those numbers attached to suicide or abuse rates, that is special. Seeing those numbers could mean something to queer people who feel isolated and alone.

But simply opening up this discussion seems to trigger a true mob of Facebook gender-truthers who argue that a small section of society are being too demanding. They believe there are only two genders, and this small minority is asking for too much. The go out of their way to point out how small a minority it is that’s asking for recognition. But if you’re going to tell me it’s a small minority – well, how small is it? We don’t have any numbers.

Even in just the first few comments underneath Newshub’s post the LGBTI+ community are called “Lgbtdumbells” and “the alhpabet mafia”. It’s rough, using an acronym designed to be inclusive to belittle us, primarily by eliminating the diversity within our community. Although the idea of an intense mafia drama about queer people meeting in a shady underground basement, smoking cigars and devising sinister plots about survey statistics does have its appeal.

Commenters trot out the same old tired gags – if people can identify as different genders than they should be able to identify as a “Ford Focus”, a joke designed to make people of diverse gender identities feel worthless. They demand it be known their are only two genders, and if you disagree “You and your pronouns can go read a science book”.

Well I took my pronouns and I did read a science book (…OK, a science blog). One in 2000 children are classified as intersex at birth. So scientifically, at birth, people are born in-between male and female. Many of them present as either male or female but some choose to identify as intersex or other alternative gender-identities. How many? Well, wouldn’t it be nice to have the stats!

What’s most frustrating about these comments is the sheer amount of people writing things like “Do these people ever shut up?” As if every time the queer community asks to be heard that is a true tax on everyone who has to listen. As if the same-sex marriage victory should have been the end of ever hearing from us. “You got what you want you gaybos – now can you please not at the 0.8 seconds it will take for me to fill in these two extra boxes on my census.”

I saw similar comments under an article about Call Me By Your Name. People were offended that they should have to see even a short clip of a queer film, that a news article about it should even come up in their feed. Even seeing one image to two men not kissing was too much time out of their day being taken up by queer people.

Of all the negative things that come with reading the comments section, this is the bleakest for me. Any moment when the media is devoted to something queer, whether that is to celebrate a film or to question the decisions of Stats NZ, there will be someone in there crying out that our community is demanding too much, making themselves too heard and taking up too much of society’s time and space.

And that’s not fair. Because we are here, we are a part of society and we deserve our space in the media. And if it upsets you that much, if you think we are getting too much attention, maybe we could work out how big our community is and just how much space in the media we should get. We can start by getting some stats.