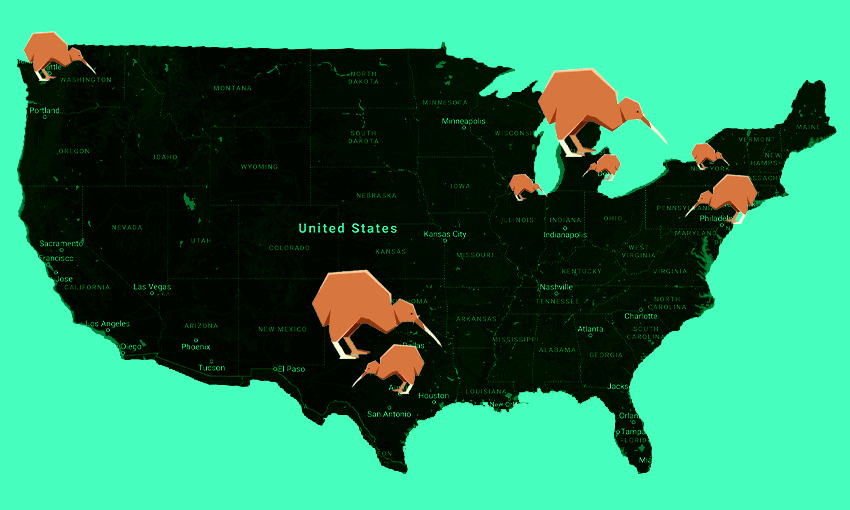 The last days of Trump-land: Conversations with Kiwis in America

With violence erupting in Washington DC this weekend and Covid-19 sweeping the nation, you could be forgiven for thinking the United States is descending into utter chaos. Justin Latif got in touch with a few mates to see if this really is the case.

Following Joe Biden’s US presidential election victory and then Donald Trump’s refusal to concede, my social network feeds made it look like the country was about to collapse into open warfare. So partly out of concern for their welfare, I reached out to some old classmates and relatives across that massive country to discover if it really is as bad as it seems.

One of my best mates, and a former Onehunga High alumni like myself, Rienus Hazelman lives in Seattle but has been working in Alaska as a trainee marine pilot. While he was there he caught Covid, but he didn’t even realise at first given how mild his symptoms were.

“When I got tested I just had a running nose and an itchy throat. But I had just spent a few days fishing and foraging for mushrooms in minus two degree weather, so I just thought it was because of that.”

When his results returned, he expected public health officials to fly into action, so he was taken aback with how casually they approached it, given he had probably caught it from an identifiable source in the community.

“They seemed pretty relaxed about it,” he says. “After I tested positive they said I was a low risk of transmission, so they asked if I could do my own contact tracing and call anyone I had been in contact with. I was a bit shocked by that.”

He says seeing how the country has dealt with Covid has almost pushed him into returning home.

But seeing president-elect Joe Biden speak about his plans to deal with the virus has given Hazelman cause for some hope. “In Seattle people are very happy and there’s a huge sense of relief that it’s over,” he says.

“But in Alaska, I think a lot are hoping the result is overturned while others have accepted that Trump has lost. I don’t think there’ll be riots, but there’ll be protests. And if anything, there might be a lone wolf type scenario or a small group who might try something, like what happened to that governor in Michigan. I feel very safe here but if I was in a state like Florida, as a liberal and being brown, I think maybe I would want to get out of there.”

Paul Spelman, the captain of my high school soccer team, now lives on the east coast and has been in lockdown since March. He’s a creative director for an advertising agency in New York and says the media coverage of Trump supporters’ violent protests isn’t reflected in what he’s seeing.

“Out here in the suburbs people are pretty chill. There are a ton of Trump flags flying around the neighborhood but my sense is that people will now just move on with their lives. A lot of the media hype around violence in the streets seems very overblown.”

He says the most challenging aspect of the last year has been the lockdowns.

“For me, the main impact has been working from home since March. With two young kids, it’s been pretty challenging. I don’t think our company will have us back in the office till a vaccine is widely available, which might not be till around March or April. I never thought in March that I would be working from home for a whole year, but here we are.

“And it looks like we might be going into another lockdown soon as the weather gets colder and the virus surges again. So there is a sense that things might be about to get a lot worse.”

Virginia* was one of my most studious classmates and so it’s not surprising that she now has a PhD and lives in Princeton, New Jersey. She says her community leans heavily towards the Democrats.

“It’s definitely safe where I’m living but if I was living in Philly or New York I would feel less safe. And from what I’ve heard, a lot of people are buying guns as it’s so easy to do that. People support Trump with so much passion and we see Trump signs everywhere – and it definitely seems to inspire a lot of hate.”

Sierra, who’s my cousin through marriage, normally spends Christmas with family in Wellington but due to New Zealand’s quarantine restrictions, this year she’ll be remaining at home in Ann Arbor, Michigan. The state went to Biden this election, after being one of Trump’s crucial wins in 2016. She says the election has further highlighted the divisions within the country but she feels media reports of rioting and violence have been exaggerated.

“Things are very overblown in the media, sure there’s some discontent and tension, but it’s in pockets,” she says. “I think those who voted for Trump here are disappointed but not likely to riot. Whereas Biden supporters are relieved to hear all major media outlets call the election for him.

“Although there are ongoing legal battles over voter fraud, I think many Republicans feel as though most mainstream media outlets and pollsters engaged in voter suppression by predicting a massive victory for Biden. In some cases, like Wisconsin, polls showed Biden ahead by something like 17 points and in actuality the race was much much closer than that, leading many to believe the polls were intentionally skewed to suppress votes for Trump and Republicans here are upset about that. And everyone is in agreement that the pollsters were the biggest losers in this election.”

Joel Greatbatch is a friend of a friend who lives in Austin, Texas. Despite the perception of Texas as a Trump stronghold, he says most people in his area were backing Biden.

“Biden’s win was received fairly well as Austin is very different politically than most of Texas. It’s ‘the little blue berry in the tomato soup of Texas’ as described by our most famous current Austinite, Matthew McConaughey. Yet after the victory there was a large protesting crowd of Trump supporters, with some armed to the teeth, as it’s legal to walk downtown with an AR15 in your hand. But I think it will blow over.”

He says Covid-19’s biggest impact has been on his work as a teacher, as he’s been teaching remotely for the last six months. Otherwise, Covid “slowed things down initially, but we were still able to pick up food and do drive through, so didn’t feel completely cut off from the outside world.”

He says regardless of all the upheaval the country is experiencing, he’s glad to be living in the United States.

“The election didn’t make me want to move too much. In some ways I actually found it all kind of exciting. That’s what is nice living here. You’re in the centre of world events and culture and history books are being written around you. New Zealand is beautiful and a wonderful place to grow up in, but you realise how far removed you are from the rest of the world and what is happening.”

*Virginia and Sierra wished to only use their first names.