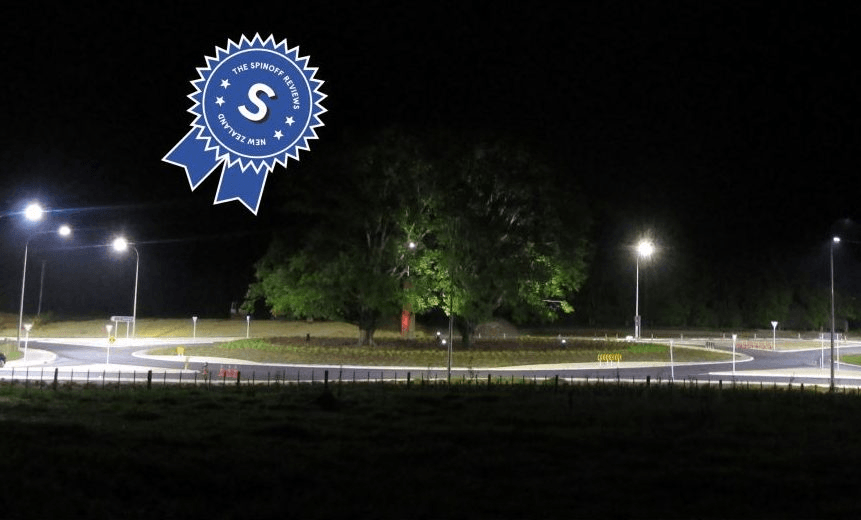 We review the entire country and culture of New Zealand, one thing at a time. Today: Simon Wilson orbits a State Highway One showpiece.

Ah, the Waikato, where NZTA sends its maddest roading engineers to do their worst. Which they certainly do: absurdly over-engineered exchanges at Te Kauwhata and Rangiriri, giant new motorways leading in and out of Hamilton, bypasses that kill off the local towns (Ngaruawahia already and Huntly soon to follow) and our favourite, that sequence of four enormous roundabouts at Taupiri whose sole purpose is to turn the stretch into a chicanery joyride.

And yet, oh gentle motorist, drive on, because nestled in the heart of South Waikato is an oasis of roading excellence: the roundabout south of Tirau. It’s the place where sanity survived.

You leave the village on a road that winds steeply down the hill, squeeze through a narrow gap under the railway overbridge, and as you round the next bend the pavements to each side turn a soft, yellowy offwhite, presaging something special, and there it is: a little piece of heaven in the middle of the road.

That pale pavement stone is volcanic ignimbrite, quarried locally in the Hinuera valley near Lake Karapiro, and it’s also what they used to make a seven-metre-high monolith, standing proudly in the roundabout, marking the boundary of Ngati Raukawa. Next to it are two magnificent mature pin oaks, planted with marvellous foresight by the Queen during her tour in 1953-54.

It’s functional, this roundabout: built to replace the dangerous intersection of SH1 and the road to Rotorua, and to provide safe access to a local reserve. And that’s all it is. You can’t stop and eat your ice cream or sit a while under the trees. You can’t do anything with it, except look at it, drive around it, mark the changing of the seasons in the leaves of those trees, and then be gone. Beauty is ever fleeting. Of course, you could spend half an hour driving round and round it, but the attractions would surely wear a little thin.