Each day of lockdown is exacerbating the digital divide for many, but experts say the answers will be found in the communities worst affected.

The divide between the digital haves and have-nots continues to be one of the major fallouts from this pandemic, according to education minister Chris Hipkins. Despite more than 45,000 laptops and hundreds of modems being distributed to schools over the past 18 months, Hipkins has admitted that while “we’ve done a lot of work on closing that digital divide, have we nailed that problem? No, we haven’t.”

A 2019 report by Motu Research found that Māori and Pacific people living in social housing, and those with disabilities, are the most digitally disadvantaged, with the Department of Internal Affairs estimating one in five New Zealanders experiences digital exclusion.

When lockdown began, Manurewa High year 13 student Baue Rubeiariki slipped back into the now familiar routine of online learning, knowing her internal assessments and external exams were both looming. But she is also keenly aware it hasn’t been so easy for a number of her fellow pupils, given their absence during Google classroom lessons.

“I’m kind of used to lockdown now. The first one was scary, but now it’s kind of OK,” she says. “But for some of my classmates, they work as essential workers, so it’s really tough for them to catch up on their schoolwork.”

Manurewa High teacher Leanne Gibson says the school is doing everything it can to support its students but there are also challenges they can’t remedy, like whether families have enough data or whether one device per household supports the amount of learning that needs to happen.

“We were delivered over 200 laptops last week and we’re busy getting those out to students,” Gibson says. “But it changes from month to month as devices go missing, break or stop working.”

Vaughan Couillault, principal of Papatoetoe High and president of the Secondary School Principals’ Association, says not having access to online materials and instead relying on photocopies and workbooks is akin to the difference between eating a “moro bar or a roast chicken”.

“A hard pack doesn’t provide the same level of nourishment compared to online learning. It just lacks the richness and depth students need at this time of year, when they’re trying to wrap up their credentials.”

While he applauds the Ministry of Education’s efforts to get devices and internet connections into schools, he says the issue goes beyond just having a screen and wifi.

“A lot of stuff has been purchased but we’re nowhere near to closing [the divide]. With my school, for example, we have enough devices to satisfy the needs of students from year 11 and above,” he says. “But we’ve just identified another six who did have connectivity but now don’t, for whatever reason, so it’s a fluid situation that requires constant attention.” 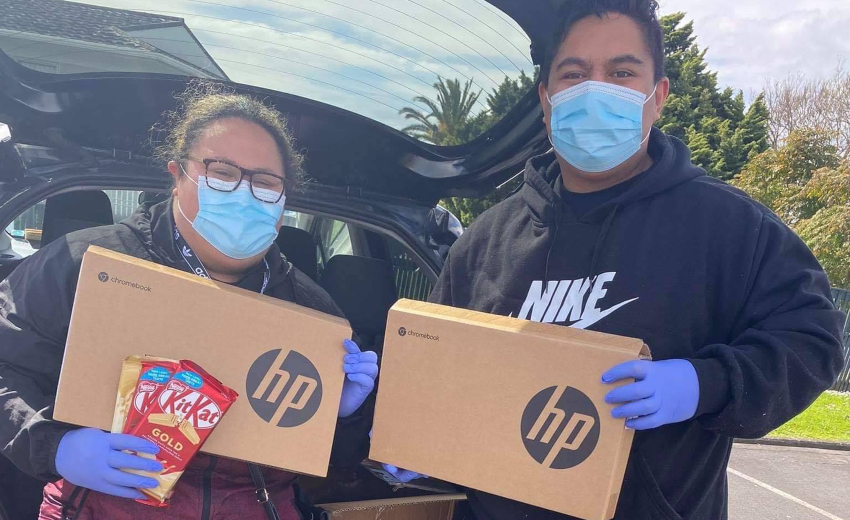 Eteroa Lafaele runs DigiTautua, a charitable initiative raising money to provide laptops to Pacific students. She’s currently working with schools to fill existing gaps due to delays with the ministry’s provision. She’s heard of one school in Ōtara that ordered 300 laptops in February but received the full consignment only last week. “The issue from where I see it is laptops have been purchased but there’s a huge backlog in terms of deliveries.”

Lafaele’s organisation carried out a survey at the beginning of the lockdown that identified more than 700 pupils in both south and west Auckland in need of a device. “From the data we collected, almost 50% of students [who took the survey] didn’t have a laptop, and 50% didn’t have internet either. So it’s not just about the device, it’s about the stuff that comes with the device.

“The digital divide is really about three pillars, which are education, resourcing and connectivity. In order to use your device you need the internet and education, but these families can’t even afford power.”

Her other frustration is how many organisations are claiming to work in this space, but are either unaware of or unwilling to understand the barriers facing these communities. “There’s heaps of organisations doing this work, providing workshops et cetera, but from what I’ve seen, they’re not connecting with the communities. And a lot of our community are very shy and so they won’t tell you if they can’t afford a laptop. So these organisations have to find a way to navigate these communities.”

Just over 10% of Māngere Central Primary’s* families don’t have an internet connection. Like Lafaele, principal Jacqualene Maindonald says she’s seen organisations offering help but it turning out to be “a lot of hui and not much do-ey”.

Regardless of this, she’s determined her pupils won’t miss out on opportunities that come from being digitally literate. “This is a priority for us as a school and so instead of just relying on the ministry, we’ve been setting aside a portion of the budget and getting on with it.” 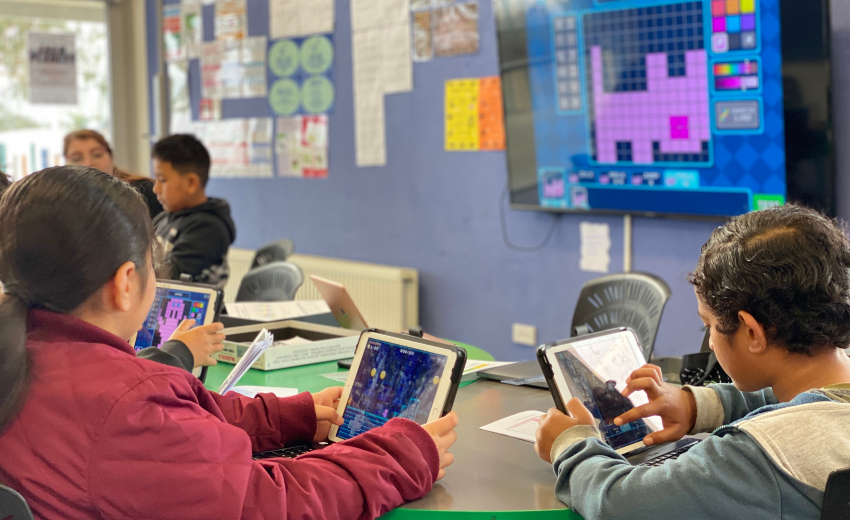 Over the last two years, the school has organised a range of initiatives to close the gap, including running workshops for students on topics such as coding and video making and hosting digital skills conferences for staff and parents. The school has also offered all its senior students a Chromebook over this lockdown and has a pilot scheme to enable families to buy a Chromebook or iPad at a significantly subsidised price.

At Manurewa High, Gibson says another measure aimed at closing the digital divide is introducing students to technology through innovative spaces like her school’s Makerspace. The Makerspace is a unique initiative at the school, funded by Foundation North and delivered in collaboration with educational consultancy Ask Q, where students can learn about digital technologies like 3D printers and laser cutters in a non-classroom setting.

Gibson says Makerspace demystifies digital tools for students unfamiliar with technology, and whets their appetites for different career options. “Students get to explore and work on their various projects and develop creative skills and techniques that they can take with them in the future if they wish to pursue that pathway.”

As a student, Rubeiariki says “I didn’t think I could be good with technology”, but says the Makerspace has opened her mind up to new career ideas. “I want to use the skills I’ve learnt here to start a business, designing and making stuff,” she says. 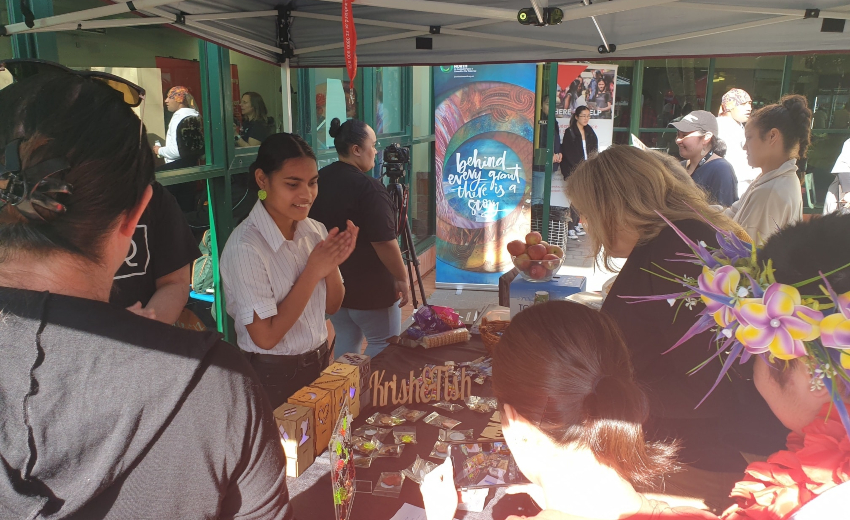 Manurewa High student Baue Rubeiariki running a stall with products she made at the school’s Makerspace (Photo: Supplied)

A deputy secretary for the Ministry of Education, Ellen MacGregor-Reid said in a written statement that more than 10,000 devices have been provided nationwide, of which 56% went to households in Auckland. This is in addition to the more than 36,000 devices sent out last year.

“The priority has been students studying for NCEA. Alongside our distribution of devices we’ve also helped with internet connections,” she says. All homes currently connected and/or being connected through the ministry will continue to have free internet access until December 2021.

“Not all learners are able to access online learning, which is why we continue to send out learning hard packs,” she says. “We’ve sent out 45,352 learning packs to decile 1 to 3 schools and kura in the Auckland region.”

Couillault’s Papatoetoe High students have been hit hard by multiple lockdowns, as well as the extra pressures of being at the centre of a large Covid outbreak in February. Does he fear for his pupils’ future?

“The students who represented our school on TV at the beginning of the year are some amazing humans who will make a difference in the world going forward, and the fact they might not do an extra achievement standard won’t make a difference,” he says. “The nature of what is being learnt is quite different to previous years, and I’m not talking about school content, I’m talking about life.”

*Justin Latif is on the Māngere Central Primary board of trustees.