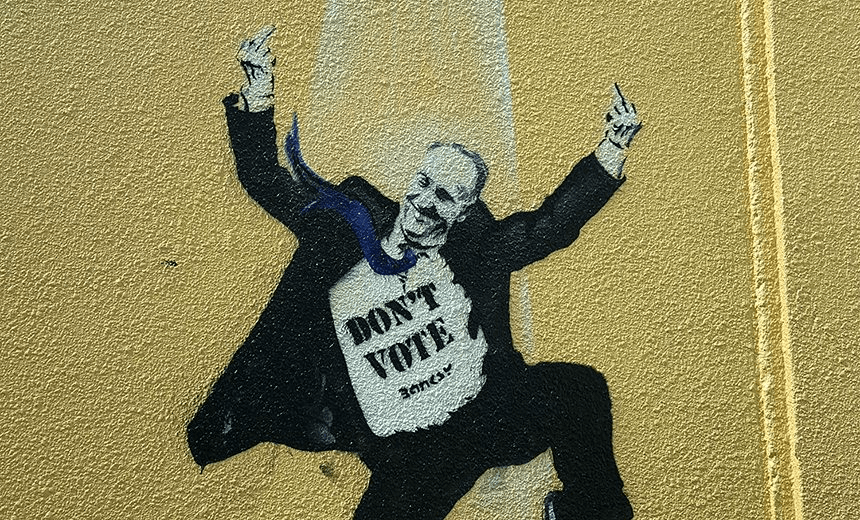 Finding Banksy: an epic quest to find out if the street art star really was in Tauranga

The sudden appearance of two Banksy-style artworks on the walls of Tauranga buildings earlier this month ignited rumours that the mysterious graffiti artist could be in town. Don Rowe set off to uncover the truth.

The first Banksy I ever saw was printed on a 100 baht t-shirt on Khao Sahn Road in Bangkok. I haggled a bit, bought it, admired it (a rioter, but instead of a molotov, he’s throwing flowers – imagine that!) and then my dad used it to check the oil in his car.

Real Banksys (Banksies?) are worth a bit more, and so it was with great surprise that The Spinoff newsroom learned one has potentially been spotted in an alleyway in Tauranga, land of the container ship and retiree. More shocking still, the timeliness of the piece – a John Key themed piece just one day after his resignation – indicates the famously edgy artist might still be in town. A reporter needs be dispatched, someone with something resembling journalism experience, and the gumption to chase a ghost. Someone called me.

I drive down the east coast, checking the beaches at Waihi, Omokoroa and the Katikati naturist park. Maybe Banksy is in disguise, and that’s one place you certainly can’t wear moustache-glasses, or anything else. Alas, no luck.

Passing straight through Tauranga, I head where anyone else would on a beautiful day – Mount Maunganui. I sit at the base of the iconic dead volcano which looms over the white sand beach, with cold beer for refreshment, and watch an endless stream of exhausted mountaineers descending in their active wear. No dice. But wait, English accents! Could these seemingly normal retirees in fact be subversive street artists?

“Excuse me, hi, are you guys Banksy?”

It’s a fair question. What is a Banksy? What would it look like?

Is Banksy an elderly woman, strolling the boulevard with her sock-and-sandled husband? Are the veins of Banksy’s aged legs inky black and varicosed?

Is he above me even now, paragliding through the dusk?

Is he any good, or just kind of annoying? All pertinent questions.

I consider my options over a roasted butternut soup as the setting sun bathes Leisure Island and the pōhutukawa at the base of The Mount in gold. I consider a little too long, and end up sleeping on the beach, tucked out of view in a slight curve of the tussock.

Breakfast is sandy bananas and an apple – real barefoot journalism. As the sun comes up I grab my surfboard and paddle out, just to make sure he’s not in the lineup. Could Banksy perhaps be two Scandinavian girls floundering in the shallows? Hard to say, because I’m a coward and didn’t talk to them.

I check Banks Avenue, hoping for some onomatopoeic miracle, but no dice. I ask a holidaymaker in jandals and a gumboot tan if he’s seen any street artists this morning.

I chase a Bay Times reporter through several intersections back to Tauranga, but lose them at a red light.

This scatterbrained approach will never work. And with the day heating up, and a swim looking too alluring, it’s time for a little more science. I head into town and try to find my way to the scene of the crime.

After loitering in the alleyways behind a bank and in the carpark of a power company, I spot an undercover cop car emerging from an alleyway, two uniforms up front. Payload. Past a crossfit gym, a furniture truck and a pile of vomit and there it is. John Key, fully 8 feet tall, flipping the double bird and ascending into a UFO tractor beam, ‘Don’t Vote’ emblazoned across his suit shirt. He looks smug as fuck. A brilliant, near photorealistic rendition.

But is it authentic? Would Banksy, a globally renowned artist who pontificates on themes such as globalism, war and the degradation of the natural world really skulk down an alleyway in small town New Zealand just to make a statement on the departure of the extraordinarily unspectacular Teflon John? My initial reaction is no, of course not. But perhaps he would. After all, Key has been the target of stenciled satire before; a headshot of Key smoking a fat joint, painted by the subversive and dangerous Josh Drummond, graced the cover of Steve Braunias’ Election 2014 chronicle Madmen. That same year, Darren Watson’s brilliant, bluesy song Planet Key was banned by the Electoral Commission, only to be later vindicated by both the High Court and Court of Appeal.

But why Tauranga? Why would Banksy go to Tauranga over somewhere actually good? A quick Google revealed a shocking twist:

I look up at Key and he looks down at me, head cocked like a coy dog, rapidly rising up and away from real problems like child poverty, the housing crisis, and whether or not a particular British street artist is roaming our streets.

Startled, I fumble my bloody phone, turning around with wild eyes on a brawny Māori dude loading furniture into the aforementioned truck.

“What? Na bro, what a funny guy though eh? There’s another one around the corner too.”

What! A scoop! Great Scott a scoop! Admittedly it was apparently already in the paper, but this was journalism in action. A man, a notepad and the people. Off I went like some crazed newshound, feet slapping on the Tauranga streets.

Alleyways have long been the domain of rats and street artists, so it was no surprise that this second piece, a meditation on hungry kids or something, should be wedged between a tattoo studio and an arcade. Street art has a little in common with cartel-style killings and Facebook memes, namely doing something provocative in secret, in a distinctive and recognisable style, then waiting for the public to stumble across it. This piece was no different.

But again, a clue! Albeit deliberately left behind. Grey paint trails down the alleyway, along the paved footpath, past a bank and right into a drain CLEARLY MARKED AS ‘ONLY FOR RAIN’. Ol’ Banksy is in fact an environmental terrorist, polluting the same harbour as the Rena! What collateral damage is justifiable under the guise of art? What statement is worth the degradation of our land and sea? This will not do.

Inside the ANZ the desk women are wary.

“Can I please look at your CCTV?”

“Ummm… we don’t release that.”

“But there’s been a crime. Someone has poured paint in that drain out there, which is clearly marked as only for rain.”

“What! Banksy’s a dick! Why don’t you try the council, when there’s drunk people they see them on CCTV, so maybe they’ll have seen that too.”

But inside the hallowed halls of local government, the council are similarly hesitant. No I can not see the mayor, I’m told, as he’s unavailable. Nor CCTV, as that’s the work of a specialised technician. With a Bansky exhibition slated for Tauranga next year, I smell a cover-up. Would the council really be complicit in environmental terrorism, all for the sake of tourist dollars? Would the mayor sacrifice it all in the name of publicity?

Stranger things have happened. I decide to appeal to the authoritarian streak in every public servant.

“But they violated a bylaw.”

“Ok well if you submit a letter with your request to the CCTV team they’ll be able to check through the footage from the last few nights and may be able to find something. I’d also recommend filing a formal complaint, would you like to do that?”

Because when it comes to finding an eco-terrorist, there is no net more inescapable than that of a small, potentially compromised, local council. But for now, Banksy – if it really is Banksy – remains at large, and anonymous.